A three-year long journey that started as a conversation between friends has ended up becoming a documentation of Kerala’s extensive culinary repertoire. In their learnings are tips to treasure our collective gastronomic heritage

In a city far, far away from God’s Own Country, when my Malayalee mother built her home brick by brick, she made sure she planted the likes of jackfruit and coconut, trees that would always root her to the home she left behind.

Years later, the aroma of ripe jackfruit hawked by street vendors continues to be a reminder of how a summer went by in lockdown, and of the vacations spent watching my grandmother gathering her daughters and daughters-in-law together for jackfruit-celebrating fare.

Wearing single-finger rubber gloves, they’d sit around in a small town in central Kerala, separating the fleshy fruit of chakkapazham (Malayalam for jackfruit) from the seeds to make chakka ada, a steamed, sweet delicacy made with rice flour. But travel to other parts of the state and this nostalgic dish is quickly replaced with other alternatives, such as sukhiyan (deep-fried jaggery, green gram, and flour shaped like ping pong balls), or the more popular pazham pori (ripe banana fritters). 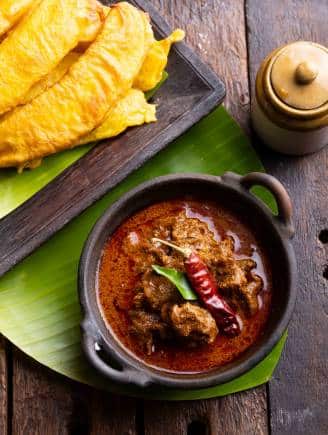 This diversity of Kerala’s cuisine led three friends from the state, Regi Mathew, John Paul, and Augustine Kurian, to wonder what treasures lay beyond the food they grew up championing for. For instance, Mathew, who is from Kottayam, grew up eating a sweet version of vattayappam, a standalone, slightly sweet, steamed dish. In John’s house in Thrissur, this rice dish transforms into a main course served with curry.

An attempt to better understand the diversity of Kerala’s cuisine transformed into a journey that’d last for three years, a search for food perfected over time. From Thiruvananthapuram to Kasargod, Paul, Kurian and Mathew travelled from city to city, meeting families over homemade meals.

“We ate at each other’s homes, and then asked our mothers to reach out to old friends they had grown up with. Then we asked them to put us in touch with their friends and that’s how the research pool grew,” recalls Mathew. “Initially our focus was just on home-cooked food, but we quickly realised how toddy shops were an integral part of the food scene in Kerala,” adds Mathew, now based in Chennai. 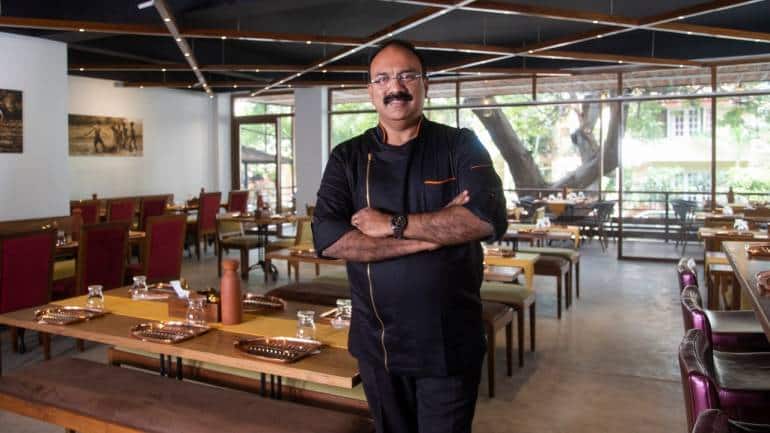 The friends found their way to 70 toddy shops, and close to 265 homes, re-discovering intimate connections between what people ate and the places they lived in.

The journey with a trove of 800 recipes, some of which have made their way onto the menu of their restaurant called Kappa Chakka Kandhari (KCK). For the uninitiated, kappa (tapioca), chakka, and kandhari (bird’s eye chilli) are some mainstays of Kerala’s cuisine. The three friends opened their first restaurant in Chennai in 2018, and the second branch in Bengaluru shortly before the pandemic’s shadow darkened the world.

While Mathew leads the chefs in the kitchen comprising mostly home chefs and cooks from toddy shops, Kurian takes care of branding and marketing. Paul handles finance and logistics for the brand.

At a time when many find themselves in a love-hate relationship with their kitchens, KCK’s story comes as a reminder of the time-tested culinary excellence that lies tucked away in homes that have changed in every way imaginable.

It’s not like restaurants offering Malayalee cuisine are scarcely existent. They thrive in nooks and crannies across south India, in celebrated five-star dining places as well as in encampments set up in the shade of magnificent old trees. What is lacking here, however, are offerings that go beyond the staples associated with the region’s cuisine, which has resulted in a somewhat limited understanding of what the state has to offer.

Some of these are available on the restaurant’s menu, like a fish masala recipe that has not disappointed KCK’s diners. This one’s origins lie in the ways of the tribal communities staying around Thiruvananthapuram. They apply a paste comprising bird’s eye chilli, kandhari chilli, and sundried gooseberries to fresh catch and then cook this on heated river stones. The process is replicated in KCK’s kitchens with grilled versions of black pomfret or seer fish.

Then there’s prawn kizhi. Mathew grew up eating the fish version of this dish cooked with coconut and Malabar tamarind, but at another home he discovered how well the preparation worked for seafood. At KCK he’s reimagined the prawn dish by steaming it in pocket-size banana leaf pouches for added flavour.

Another under-rated dish KCK has helped bring to mainstream diners is pidi, which is usually served with kozhi (chicken) curry. “Not many know about this because this is largely popular in central Travancore,” says Mathew. To him it brings back the days his younger self spent attending church festivals where these tiny rice dumplings were cooked in coconut milk and served with country-style (read: spicy) curries. 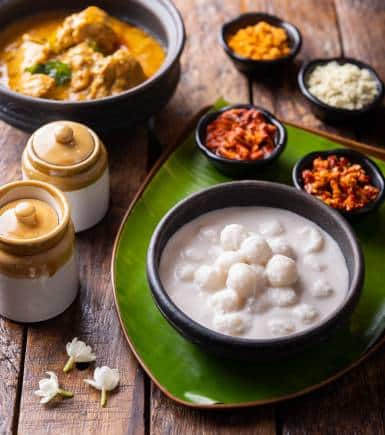 Then there’s the unakkai, a fantastic reminder of Kerala’s history, influenced by the Arab traders who sailed to her shore countless moons ago, and the merging of Dutch and Portuguese cultures. Shaped like pods of silk cotton trees, these have a hard coating of ripe Kerala banana on the outside, a soft coconut filling inside. Unakkai is particularly popular among the Moplah (as the local Malabar Muslim community is called) community.

It'd be easy to incorrectly assume that toddy shops aren’t family-friendly spaces, but the growing number of travel companies who have included some of these shops on their guided tours have helped dispel this notion to an extent.

A toddy shop favourite at KCK is the seasonal ari kadukka, green mussels stuffed with spiced rice, then steamed and batter-fried. As loyalists will swear, this dish has long been the poster child for Malabari cuisine. The food in these toddy shops is held to high standards: one can go anywhere for toddy, says Mathew, but it is the taste of food on offer that keeps their patrons coming in day after day. “They rarely ever change the cooks in the toddy shops because the regulars are so familiar with their cooking. They make only limited quantities of everything, if it gets over, it gets over,” says Mathew.

Anyone familiar with Kerala would tell you how toddy, an alcoholic beverage, is tapped from palm trees at dawn. The toddy-tappers move from one courtyard to another, climbing up the trees to harvest fresh toddy.

“There are no payments made, instead once in a week or so the toddy palm-owners are given a share of the toddy collected,” says Regi.

Since one can’t down all the toddy that comes in, the palm wine essentially makes it into a host of things, including soft and spongy yeast-less appams (kalappams, kal being toddy), and toddy vinegar.

But, what Mathew had almost forgotten till he had it at someone’s home was a dish called pazham nanachathu, a serving of ripe, sundried bananas mixed with paani (not Hindi for water in this context). Making paani requires placing fresh toddy in a pot lined with lime: the citrus element prevents the beverage from fermenting. Then the pot is transferred to a slow-burning wood fire that lasts for about five hours, leaving behind syrup-like remains, paani.

“It has a natural sweetness to it and is far better than maple syrup,” advocates Mathew.

In the minds of Mathew and his team is a map of Kerala unlike any other – places are marked according to farms, plantations and home collectives they can get the best of ingredients from. A coconut is a coconut, and yet, in a land overflowing with coconuts, the backers of KCK insist that all their coconuts come from a place near Thrissur, while the coconut oil used for cooking comes from Angamaly. While kappa is grown widely across Kerala, KCK sources it only from towns of Pala and Ramapuram, sites where water doesn’t stagnate in the tuber plantations.

“We have our own version of geographical tagging going on, every ingredient is sourced after going through the information collated from mothers and grandmothers, combined with best practices followed in the region,” says Mathew.

Much of their mutton comes from Wayanad, from parts where the terrain is bumpy and cragged, where goats feast on herbs touting medicinal properties. Their tea leaves come from high ranges of scenic Munnar, bird’s eye chilli from Thiruvananthapuram. And their pepper, the much-desired spice once considered a luxury in medieval Europe, comes from Wayanad. Here, the brand they source from allows the peppercorn to mature on vines, a process that helps in deepening of flavour. 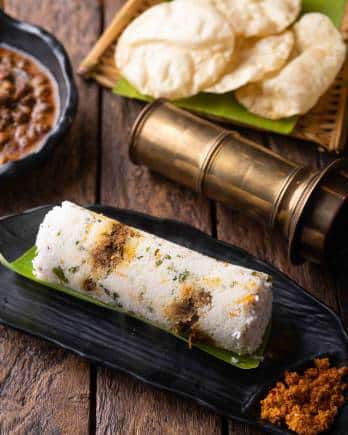 Kerala is marked largely by staid dosas, Malabar biryani, flaky parotta and meat fry servings on most menus hawking pan-India fare, and this meagreness pales in the shadow of a world that keeps on giving, if you know where to look. And three friends who went looking sure found it, building a reservoir of lesser-known favourites one could bat for. This pulsating diversity of cuisine is a reminder how India’s regional cuisine has been reduced to homogeneous entities, and one wishes for more research-backed avenues that could help treasure India’s culinary heritage.

Nikita Puri is a journalist based in Bengaluru.