Upcoming Webinar:Join us for 'The Future Techshot' on Sept 22, 10:30am to gain insights into role of tech in streamlining businesses. Register Now!
you are here: HomeNewsTrendsTravel

Ranakpur Temple - A masterpiece in marble

Spread out over 48,000 square feet in the Pali district, the Ranakpur temple complex is much bigger than the more famous Dilwara temple complex but its ceilings and pillars are as elaborately carved as the former. Surrounded by greenery, its location in the Aravali valley makes it fit for deep contemplation and meditation as its makers intended.

You may or not may not be a believer and you may or may not be a Jain, but you will definitely be awestruck by a magnificent marble creation in Rajasthan, dedicated to the first Jain Tirthankara. In the small town of Ranakpur between Jodhpur and Udaipur is a grand temple complex so beautifully sculpted that it lifts human skill to other-worldly level.

Spread out over 48,000 square feet in the Pali district, the Ranakpur temple complex is much bigger than the more famous Dilwara temple complex but its ceilings and pillars are as elaborately carved as the former. Surrounded by greenery, its location in the Aravali valley makes it fit for deep contemplation and meditation as its makers intended. Built as an ode to the first Tirthankara Adinath by Dharna Shah, a local Jain businessman and minister in the court of Rajput king Rana Kumbha, the complex remains open for devotees from 7 am to 7 pm, but tourists with cameras are allowed to enter only between 12 noon and 5 pm so that prayers can be offered without disturbance.

The story behind the complex’s construction and its name is rather interesting. It’s believed that one night Dharna Shah had a vision of a celestial plane called Nalinigulma Viman and he decided to build a temple resembling this vehicle. He approached the king who readily donated the land needed.

After inviting architects throughout the land to present their ideas, Dharna Seth chose one called Depa, Depaka, or Deepaka depending on which piece of research you read, to supervise construction. As the temple would need looking after, the king asked for some people to be moved to the vicinity and as a mark of honour, the area began to be called ‘Ranapur’ which was later changed to ‘Ranakpur’.

Within the complex are several temples including Chaumukha or Chaturmukh Temple, Parsavanath Temple, Amba Mata Temple, and Surya or Sun Temple. The Chaturmukh Temple is the main sanctuary and has four six-foot white marble statues of Adinath or Rishabhdev, each facing a cardinal direction. On account of these four sculptures facing four directions, the temple derives its name from ‘Chau’ or ‘Chatur’ meaning four.

The roof of the temple has five large shikhars, of which the largest crowns the central sanctuary while the other four top corner shrines. Four Rangamandapas (assembly halls), four Mahadhar Prasads (principal shrines), and 84 big and small Devakuikas (subsidiary shrines) complete the picture. 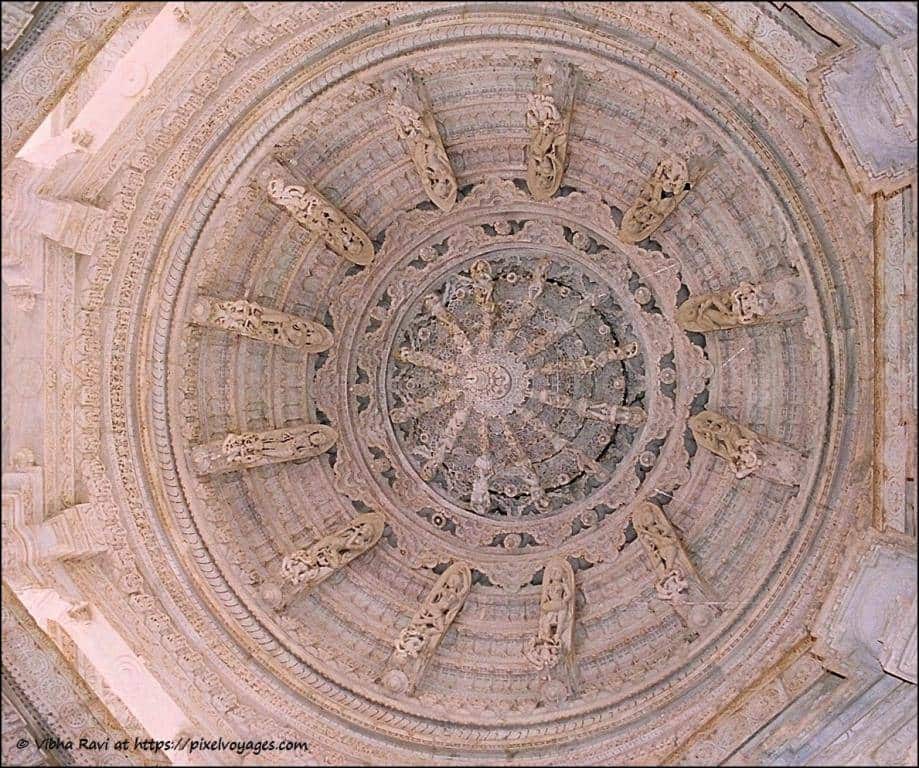 The most striking visual element in the temple is the layout of pillars which ensures than none of them obstructs the view of the sanctum sanctorum. You tend to lose count when you pass so many pillars ornately carved with foliate scroll-work and geometrical motifs, but they’re believed to be 1,444 in number. If these statistics don’t impress you, be assured a visit will. It’s said that when the Mughal emperor Akbar visited the temple complex, he was so moved by its beauty that he had a column inscribed with an order forbidding anyone from ever destroying it. That says it all, don’t you think?
Tags: #Travel
first published: Apr 26, 2017 09:38 pm