In this age of despair, let’s find happiness in Bhutan, the only country that measures its Gross Domestic Product in Gross National Happiness.

As countries lock down and gloom sets in, not many remember that March 20 is UN International Day of Happiness. In this age of despair, let’s find happiness in Bhutan, the only country that measures its Gross Domestic Product (GDP) in Gross National Happiness (GNH). 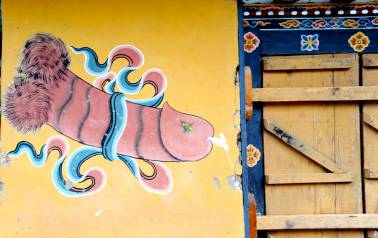 Get a phallic blessing

Prudes would warn you to stay away from Chhimi Lhakhang, a ‘phallic’ village. In the Temple of the Divine Mad Monk (Temple of Fertility), blessings get tapped on the head with a consecrated wooden phallus. Phallic symbols are everywhere. Painted on every wall and on every door there hangs a wooden phallus to ward off evil spirits. In a land where PDA is spurned dutifully, flying phalluses look absolutely anomalous but locals repeat the story of Lam Drukpa Kuenley, a 15th-century monk who used his phallus as a symbolic tool for all his teachings. Catch a big breath before leaping to Tiger’s Nest Monastery. It is 10,240 feet above sea level. That’s almost one-third the height of Mount Everest. That’s too high, too far, the terrain too treacherous. Carved out of granite ledges, the monastery - Bhutan’s most sacred Buddhist site and its most famous trekking trail - is a three-hour trek to the top. On way are felled logs, sharp bends, falling rocks, dangerously slippery dirt track and those 700 rock-hewn stone steps. The 7-km uphill trek takes about 3 hours; in all, the trek would take at least 6 hours. Start early, wear good walking shoes, carry water, take walking sticks (they are usually available in hotels). If the trek is too daunting, you can hire a mule to go uphill (costs roughly about Rs 750).

This is not the Bro you are thinking of. It is Borders Road Organisation that lays roads and packs a huge funny bone. Drive anywhere and Bro’s dark humour pops on large yellow hoardings. Listen to Bro.

After whisky, driving is risky.
Life is short, don’t make it shorter.
Be Mr Late, not Late Mr.
Be gentle on my curves.
If you are married, divorce speed.
After rum, driving no more fun.
If you sleep, family will weep.
I am curvaceous, be slow.

For safe arriving, no liquor in driving. 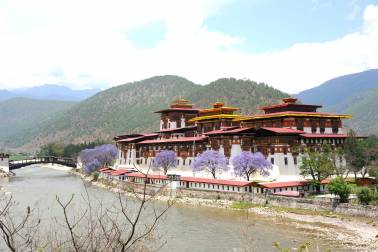 On the rooftop of the world, find your own GNH in Pungtang Dechen Photrang Dzong (The Palace of the Great Happiness). Constructed in 1637-1638, it is Bhutan’s second oldest and second largest dzong that houses the sacred relics of the Drupka Kagyu school of Tibetan Buddhism. In the main temple sits a colossal Buddha, with butter lamps at his feet and a 1,000 miniature Buddhas stacked behind glass shelves. Ema Datshi is no Bhutanese hunk looking modish in a gho (the traditional Bhutanese outfit for men). Ema is the nation’s favourite - a green chilli and cheese dish. If you are shopping in Bhutan and find large garlands with white rectangular beads, do not snake it around your neck. Chew it. It is yak’s cheese.

Golfing on the Roof of the World 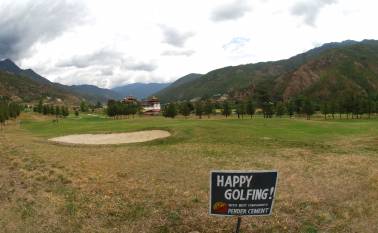 The story of golf in Bhutan began in the early 1970s when a Brigadier of the Indian Army laid his eyes on a scrap of fallow paddy fields at 2,500 metres above sea level, sought permission from King Jigme Dorji Wangchuck and cobbled together a 9-hole golf course. There were no pros, no golf shops, no qualified instructors. Not too many golfers, either. At Royal Thimpu Golf Club, you play twice over in an undulating terrain that has beefy hills to its left and at the far end sits the majestic 17th-century Trashi Chhoe Dzong, home of the  National Assembly and summer residence of the capital’s monastic community. India House (the Indian embassy) boasts of a golf course. Ask Bhutanese golfers and they would proudly tell you that it is the only embassy precincts in the world with a golf course. Probably, they are right.

While teeing off, lend an ear to an ol’ world story. Just before winter, shepherds from the north herded their yaks down to the valley where yaks were sold, slaughtered and preserved as food for the harsh winter. That’s when the Yak Open began. A yak was bought as a trophy for about Rs 10,000-15,0000. The winner, however, did not take it all; winners were given parts of the yak – raw and unskinned. The winner got the head, the runners-up, the best cut. Yak Open is dead now but the story is oft-repeated.

Getting there: For Indian nationals, a passport is not mandatory to enter Bhutan, Voters Identity Card is (VIC) good enough. Visa is on arrival and there is no visa fee.

By land: There are three land border crossings - Phuentsholing, Gelephu and Samdrup Jongkhar. Those wishing to drive their cars to Bhutan are required to obtain Route Permit from the Road Safety and Transport Authority office in Bhutan after obtaining the entry permit from the Department of Immigration. All travel arrangements to Bhutan must be made through a local tour operator (details available on www.tourism.gov.bt)

Currency: Bhutanese currency is known as the Ngultrum. Indian currency is widely accepted in Bhutan, with the exception of Rs 2,000 notes.