7 cities with the best Halloween experiences in the world

More than 2,000 years ago, the Celts in Ireland celebrated the festival of Samhain on October 31, when the dead returned to earth before the start of a new year. Old fires were extinguished and new ones lit. Halloween grew in popularity on the other side of the Atlantic when thousands of Irish people emigrated to America in the late 19th century following the potato famine.

Halloween is celebrated in various ways around the world. Here are some best cities to be in on Halloween:

Often called Europe’s biggest Halloween party city and the world’s best Halloween destination, for 35 years, Derry-Londonderry, the completely walled city in Ireland and the UK, has been home to the festival that has Celtic origins.

This year, the city’s sparkling waterfront will be transformed into the Whispering Wharf where seanchaí (story tellers) will tell the tallest of tales. In the heart of the city, the City of Bones will present a spectacular aerial installation filling the night sky with daredevil acrobatics, while the spirits of Walter de Burgh and his ancestors haunt the Guildhall Square and city gates. There will be Halloween Hay Trail and some out-of-this-world fancy dress.

In the last week of October, Corinaldo goes from being the most beautiful village in Italy to being the national capital of Halloween. Since 1998, on the feast of Halloween, the historic centre of the town is transformed into a dark horrific place with candles, cobwebs, pumpkins, fascinating scenery, men/women in terrifying costumes.

The town’s Witch Festival is attended by over 60,000 people and is replete with virtual horror experiences, crazy photographic portraits, the ‘transformer towers’, alchemy, trick or treat, nights of madness and delirium. ‘Miss Witch’ - the most beautiful witch - is also elected during the event. 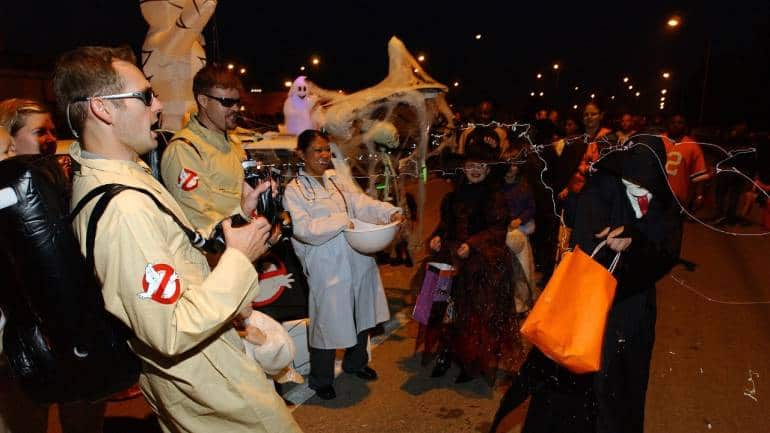 Halloween at Aviano Air Base in Italy (Image via Wikimedia Commons)

On and around October 31, see the scarier side of London. Venture into haunted venues, brave bone-chilling attractions, dare to go on special Halloween tours and find tricks and treats. According to visitlondon.com, here are the top 10 things to do this Halloween:

- Step into the menacing world of the Dark Arts, as the Harry Potter film studios are given a Halloween makeover at Warner Bros.
- Delve into gruesome tales during The London Dungeon's Halloween takeover with a terrifying show The Surgeon.
- Hear tales of torture and imprisonment, and explore the Bloody Tower at Tower of London.
- Get up close to some of the world’s most feared animals in London on the Shark Walk at Sea Life London aquarium and hear spooky stories from the deep as you come face-to-face with scary sea creatures.
- Climb aboard for some spooky sailing on the London Eye river cruise and sip blood orange gin.
- Descend into the horrifyingly haunted London Bridge Experience and London Tombs.
- Run for your life through the Covenant spaceship in Madame Tussauds' Alien: Escape experience and come face-to-face with a killer line-up, as all six James Bond actors’ figures return with a vengeance.
- Blow away the cobwebs with a Halloween-themed Thames Rockets speedboat tour.
- Step into one of England's oldest and most notorious prisons, Clink Prison Museum, to see torture devices.

- Go on a mind-derailing journey through fear at the scary Fright Nights at Thorpe Park. 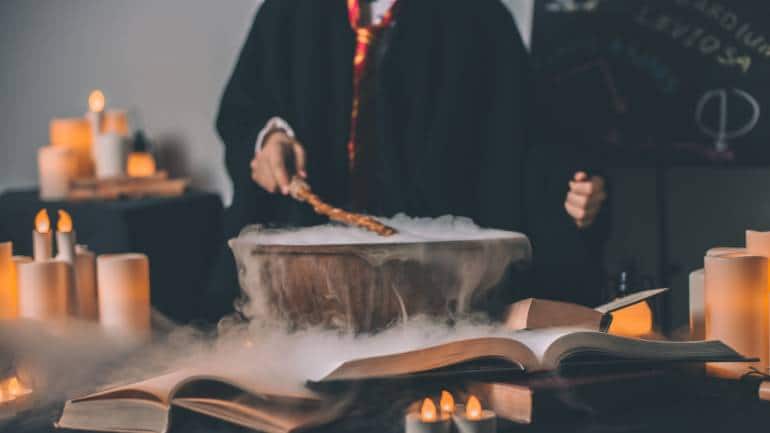 (Representative image) The Harry Potter film studios are getting a Halloween makeover this year.

The Mexicans do not call it Halloween. It is Dia de los Muertos (Day of the Dead) in which locals spend day/night in local cemeteries to welcome the souls of their ancestors and their dead loved ones. They cook their favourite food. And yes, there’s tequila. On the streets, women walk in zombie bride costumes, their face painted in the distinctive ‘La Catrina’ design, emblematic of the Day of the Dead festival, and wear flowers in their hair.

Headed by a noisy brass band, people pass through villages, stopping to dance, sing, drink beer before heading to the next village. The festivities are so significant that in 2008, Dia de Muertos was added to UNESCO’s list of Intangible Cultural Heritage of Humanity.

Day of the Dead in Mexico (Photo by J Mndz via Wikimedia Commons 2.0)

In New York, Halloween is an annual obsession. The Village Halloween Parade in Greenwich Village is one of the spookiest and best Halloween events. There is Witches' Ball at The McKittrick Hotel, where there will be demons, devils, witches and sprites; you can walk down the street along with ghouls or participate in Crypt Crawls or join the masquerade party by Collective and Matte. Do not miss the Great Jack O’Lantern Blaze at Van Cortlandt Manor (Hudson Valley) and Old Bethpage Village Restoration in Old Bethpage, and Halloween Harvest Festival at Socrates Sculpture Park. In Central Park, join the Scavenger Hunt or watch the Pumpkin Flotilla. Transylvania, the fabled Romanian region forever associated with Bram Stoker’s Dracula, abounds in tales of haunted castles, vampires and werewolves. On October 31, the town comes alive with night-long costume parties and zombie parades in dark medieval lanes. Do not look for decorated pumpkins and Jack O’Lantern. Instead, head to Bran Castle, also known as Dracula’s Castle, for the ultimate Halloween party. Located in a small town near Brasov, this spine-tingling Gothic fortress is the venue for a Halloween party which includes dinner and a tour of the castle. Spare a few hours for Sighisoara, the home of Dracula which is now a UNESCO Heritage Site. Have dinner at Vlad Dracul House – the place where Vlad the Impaler was reputedly born, which is now a restaurant. (Photo by Pmatlock via Wikimedia Commons 3.0)

It all started in 1982 when the City of Salem (also called the Witch City) planned the first Salem Haunted Happenings Festival during Halloween weekend. Today, members of the modern Pagan and Witch communities who have a home in Salem share their beliefs and celebrations with both locals and out of town guests who come to celebrate the Halloween season in Salem.