With his Wimbledon win, has Djokovic dethroned Federer as the greatest?

Quantifying greatness can be difficult, but some statistics can help. First, there is the simple grand slam count. In tennis, the four grand slams (Australian Open, French Open, Wimbledon and US Open) form the backbone of the annual calendar.

In last Sunday’s epic Wimbledon final, Roger Federer surpassed Novak Djokovic on most metrics—points won, aces served and winners hit. However, he failed on the one that mattered finally—he lost the match to Djokovic. Did he also lose, or at least significantly reduce, the right to be called the greatest men’s tennis player of all time to the same man?

Quantifying greatness can be difficult, but some statistics can help. First, there is the simple grand slam count. In tennis, the four grand slams (Australian Open, French Open, Wimbledon and US Open) form the backbone of the annual calendar.

For players, they offer the greatest rewards—in prize-money, tour points and prestige. For fans, they offer spectacular battles and a barometer for greatness.

On the grand slam count, Roger Federer, with 20 titles, leads the way, for now. His rivals Rafael Nadal (18 titles) and Djokovic (16) are fast catching up and arguably have more years of tennis ahead of them. However, this simple count masks differences in competition.

For instance, Federer won his first few grand slams against relatively weaker players: The domination of Pete Sampras and Andre Agassi had ended and his two major rivals, Nadal and Djokovic, were yet to rise. Nadal had to contend with the formidable Federer for his first grand slam victory, and Djokovic had to compete with both Federer and Nadal at their peak (see chart 1). 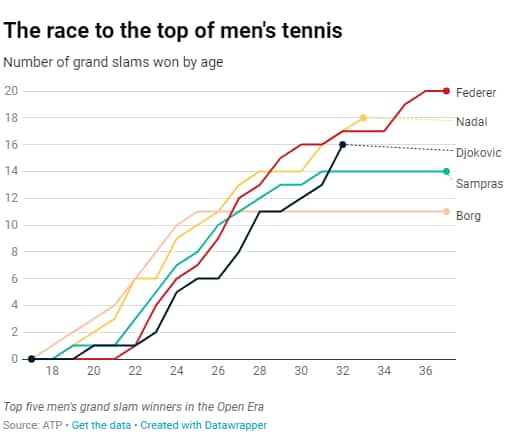 The grand slam count also disadvantages those who retire early. Bjorn Borg won 11 grand slams by the age of 25 and then left the sport at just 26. His overall grand slam count may be low, but his pace of grand slam accumulation was unprecedented.

On this measure, Borg fares far better. His peak Elo rating of 2,609, which he reached in 1980, puts him in second place. But it is Djokovic who sits at the summit with a peak Elo rating of 2,620 achieved at the 2016 Australian Open, according to data from Ultimate Tennis Statistics, a tennis portal. Of the top five peak Elo ratings ever recorded, three come from the Federer-Nadal-Djokovic trinity. Little wonder then that, between them, they have won a staggering 53 of the 63 grand slams since 2004. 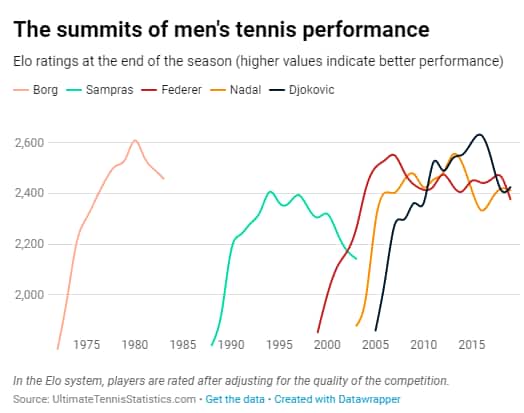 Within this dominance, each of these players has carved out a dominion of their own.

Federer specializes on grass, Nadal on clay, and Djokovic on hard courts. For many fans, discerning all this and assessing their relative greatness is simple: Examine their head-to-head records.

As an individual sport, over time, they would argue, the better player would prevail more. Djokovic tops this measure, too. He enjoys winning records against both Nadal (winning a marginal 52% of their matches) and Federer (54%). However, for many fans, greatness is more about the means than the ends. These fans care for tennis style and dominant victories. One measure of this is the ratio between how many points a player wins of the opposition’s serve and how many they lose on their serve.

A higher ratio implies greater dominance as a player wins points on his serve comfortably, while enjoying success against the opposition’s serve. On this measure, Federer edges Djokovic and Nadal.

Another aspect of greatness is performance under pressure. The beauty and cruelty of tennis, as Djokovic demonstrated on Sunday, is that all points are not equal.

Winning crucial breakpoints when the opponent serves and defending breakpoints on one’s serve exemplify a champion’s nerve. The ratio of breakpoints converted to breakpoints lost captures this quantitatively and Nadal leads on this measure. 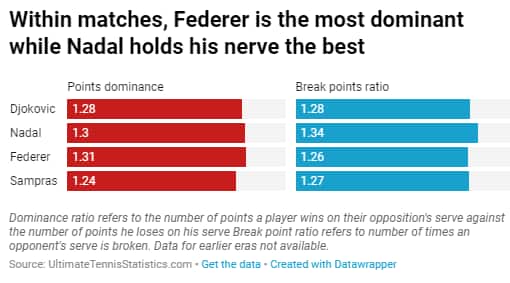 Considering all these statistics, the greatest of all time is not definitive (yet).

However, all the numbers indisputably show that Federer, Nadal and Djokovic make this the greatest era of all time for tennis fans.

For many of these fans, a player’s greatness is defined by their feats on the court like Federer caressing a drop shot to fall just over the net, or Djokovic returning a thunderous serve into the empty space in the far corner of the court, or Nadal firing a forehand to beat his opponent at the net by several feet and then curve, deliciously banana-like, into the court. For these moments of genius, there are no statistics.
Mint
TAGS: #Sports
first published: Jul 19, 2019 10:56 am