The success of the Indian men's and women's hockey teams and P.V. Sindhu, and the medal prospects of Lovlina Borgohain have started a war of words and set into motion a bunch of ludicrous claims.

If India’s below-par performance at the Tokyo Olympics has come as no surprise, the antics of Indian politicians to lay their hands on one minute of fame has.

While the two individual athletes who have won medals, and those who came close, needed to be hailed for having come as far as they did in the absence of any serious sponsorship, a winner  – or even potential winner –  has many fathers.

The Punjab and Haryana Chief Ministers are at loggerheads over how many Punjabis and Haryanvis constitute the Indian men’s hockey team – which reached the semi-finals in an Olympics after 49 years, beating Great Britain 3-1 on August 1 – and the women's hockey team.

While Punjab Chief Minister Amarinder Singh was "happy to note that all three goals were scored by Punjab players" Dilpreet Singh, Gurjant Singh and Hardik Singh, his Haryana counterpart went one step further.

After the 5-2 blank out of the Indians by world champions Belgium on Tuesday morning, the last has obviously been heard on the subject.

Haryana Chief Minister Manohar Lal Khattar said that the victorious Indian women’s team that beat Australia in a stunning upset, had no less than eight players from Haryana!

"In the Indian women’s hockey team, nine players are from Haryana and the captain of this team, Rani Rampal, is also from Shahabad, which is a matter of pride for the people of Haryana,” the Chief Minister said.

Haryana was part of Punjab till 1966, and often, family histories can overlap or be difficult to ascertain, particularly at short notice.

Write-ups on the turnaround in the fortunes of Indian hockey, however, have been laying the credit at the doors of an unlikely state, Odisha, to the country's east. The official website of Hockey India also mentions Odisha as its "major team partner".

Since 2018, this backward state with a very reticent Chief Minister Naveen Patnaik – a former hockey goalkeeper at his alma mater Doon School – has been the official sponsor of India’s junior, men’s, and women’s national teams – some time-tested political hyperbole notwithstanding.

He has backed Indian hockey with money and infrastructure at a time when the country had virtually turned its back on hockey for more glamorous and "paying" sports such as cricket.

Since 2018, the year Odisha hosted the hockey World Cup in capital Bhubaneswar, Patnaik’s state has taken on the role of hockey’s official sponsor.

The cash-strapped Odisha government has tapped into the Odisha Mining Corporation (OMC) – a state undertaking with regular cash inflows – to fund the beleaguered game. The money ploughed into the teams isn’t big, but the Rs 20 crore annual assistance, is helping.

There is very little information available on how much the Central government through the Ministry of Youth Affairs and Sports pumps into Indian hockey, but it is said to be substantial, as holding camps and organizing team travel is an expensive business.

Hours after badminton champion P.V. Sindhu won a bronze medal at the Tokyo Olympics on Sunday, a tussle has broken out between Telangana and Andhra Pradesh over her origins.

Many politicians and social media activists in Telangana claimed Sindhu to be their pride because she was born and brought up in Hyderabad and her father is from Telangana.

Those from neighbouring Andhra Pradesh – which shares Hyderabad as its de jure capital till 2024 – countered, saying that Sindhu's mother is from Vijayawada.

Then there are those aficionados who are familiar with the family’s history of relocations: They say her parents migrated to Hyderabad before she was born, which makes her “typical” Hyderabadi.

Others still, were busy googling her caste, even as the semi-final was underway.

Eyebrows have been raised in Assam after Chief Minister Himanta Biswa Sarma "felicitated" boxer Lovlina Borgohain, who won her quarterfinal bout last Friday, at a public ceremony – the only trouble is the picture framed in the background had Sarma in the frame with no sign of the India hope anywhere!

Says veteran sportswriter and journalist G. Rajaraman: "We should not look at the performance in the Olympic Games through regional glasses, at least until the competition has ended. The teams represent India. We need to use sports to smoothen differences in society rather than instill thoughts that can create a divide in sports teams.”

For the politicians, however, the vote is the single most important consideration. 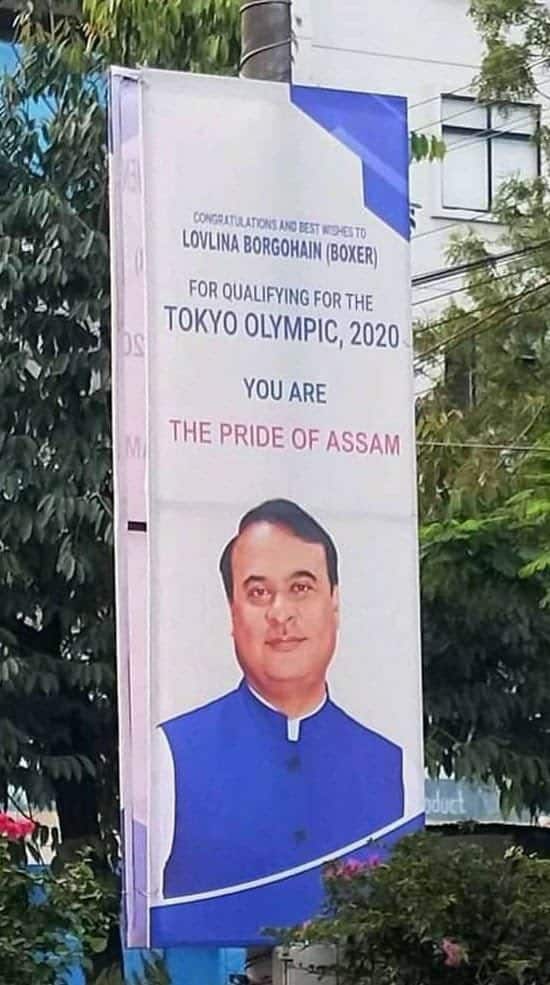