Condoling the death of Milkha Singh, Home Minister Amit Shah said one of the brightest stars of Indian sports has been lost.

Milkha Singh breathe his last five days after this wife Nirmal Kaur passed away due to COVID-19.

The nation mourned the end of an era as it paid homage to nonagenarian sprint icon Milkha Singh, who died on Friday after battling COVID-19 for a month, with Prime Minister Narendra Modi leading the tributes by describing him as a "colossal sportsperson".

Milkha died at Chandigarh's PGIMER hospital, less than a week after he lost his wife Nirmal Kaur, a former national volleyball captain, to the same ailment. He was 91 and is survived by his golfer son Jeev Milkha Singh and three daughters.

"In the passing away of Shri Milkha Singh Ji, we have lost a colossal sportsperson, who captured the nation's imagination and had a special place in the hearts of countless Indians," PM Modi said in a tweet.

"His inspiring personality endeared himself to millions. Anguished by his passing away."

India's sporting fraternity also paid homage to one of its most inspiring figures, who continued to be a keen observer even after quitting the track.

Olympic-bound star javelin throwers Neeraj Copra tweeted "We lost a Gem. He will always remain as an inspiration for every Indian. May his soul Rest in peace." 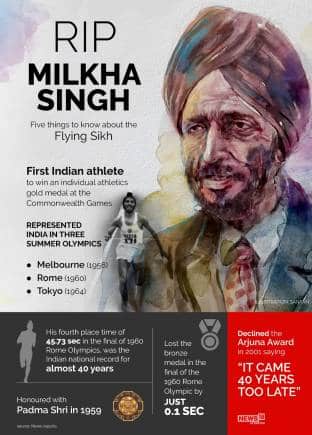 Sports Authority of India (SAI) expressed "immense sadness at the demise of one of India's greatest ever sportspersons 'The Flying Sikh' Milkha Singh. "A gold medalist at the CWG & Asian Games, he held the 400m National record for 38 years. Condolences to his family & the millions whom he inspired," the SAI said in a tweet.

"A gold medalist at the CWG & Asian Games, he held the 400m National record for 38 years. Condolences to his family & the millions whom he inspired," the SAI said in a tweet.

"…his sharp observations on Indian sport will be missed. His towering legacy will continue to inspire generations of young Indians. Rest in peace legend."

"Really shocked by the demise of the legend Milkha sir. You will forever have a very special place in my heart.The Flying Sikh will live forever. RIP" Indian sprinter Mohamad Anas Yahiya.

Indian tennis star Sania Mirza said "Had the honour of meeting you and you blessed me so many times .. the kindest and warmest Palms up together RIP Milkha Singh sir .. the world will miss a legend like you ..MilkhaSingh."

"Really shocked and sad to learn about the passing away of the legend Milkha Singh ji. Om Shanti," Javelin thrower Devendra Jhajharia said.

"What an inspiration you were to the millions like us. There will be none like you sir Rest in peace legend MilkhaSingh," she posted.

"We join the nation in mourning the loss of the iconic 'Flying Sikh' Milkha Singh. His incredible achievements will continue to inspire future generations. May his soul rest in peace RIP."

Assam Chief Minsiter Himanata Biswa Sarma said: "Saddened at the demise of Flying Sikh' Captain Milkha Singh. His laurels had not only made India swell with pride but also inspired generations of sports enthusiasts. My condolences to his family. Om Shanti!"

Indian wicketkeeper-batsman Wriddhiman Saha, squash player Joshna Chinappa and shooter Sanjeev Rajput also paid homage to the sprint icon. "Saddened by the passing away of #MilkhaSingh ji. RIP the Flying Sikh. An inspiration for millions. A great loss to our nation," Saha tweeted.

"Very saddened to hear about the passing of Milkha Singh Sir. A True Legend and Champion. You will be greatly missed. RIP Sir," Chinappa wrote.

All India Football federation president Praful Patel said: "Deeply pained to learn about the passing of 'The Flying Sikh' Shri #MilkhaSingh Ji. The legendary athlete made India proud with his sporting achievements & his legacy will continue to be one of the most inspiring stories in Indian sports. May his soul rest in eternal peace"

"Sad to hear about the passing away of legendary Indian sprinter Sardar #MilkhaSingh . He will always remain an inspiration for all. Om Shanti," Union Minister Praksh Javadekar said.