How Djokovic forces his opponents to surrender, even without any 'big weapons'

It is humanly impossible to maintain the same level of play throughout a match. But while the match graph of most players resembles the Mumbai skyline—high skyscrapers interspersed with shanties. Djokovic’s graph often mirrors New York—skyscrapers competing with other high-rises.

Novak Djokovic reacts after winning a point against Stefanos Tsitsipas of Greece during their final match of the French Open. Djokovic turned the match around after losing the first two sets to Tsitsipas. (Image: AP).

No one epitomizes this saying from the iconic Hollywood film, Rocky, more than Novak Djokovic. This year’s French Open alone has enough examples to support that claim.

Two sets down vs Lorenzo Musetti in the fourth round, Djokovic took the match into the decider before forcing his 19-year-old opponent into retirement in the fifth. Post the match Musetti confessed, ‘There was no chance that I could win a point, so I decided to retire.’

Then, stung by a rampaging Rafael Nadal in the opening set of the semi-finals and trailing 5-0—wounds that almost no player would recover from—Djokovic fought back to win the next three sets, making him the first man ever to beat Nadal twice on Parisian clay.

Even the title clash followed a similar script, where the world no.1 bounced back from two sets down to win the final in five, against the rising star of men’s tennis, Stefanos Tsitsipas. All examples of a seasoned boxer soaking in a barrage of punches, enduring the pain, biding his time, before landing the knockout punch!

That said, for a man who quite clearly doesn’t possess a ‘big weapon’—and a lot of his rivals do—Djokovic has one too many knockouts to his credit. How?

It isn’t easy to come to terms with that phase in a match when you know you are second best. You hit your best shot, but your opponent finds a way to better it. Worse still, when the man on the other side of the ring throws a good punch, you don’t have an answer for it. Self doubt creeps in. ‘You can’t beat him,’ says the little voice inside your head. You panic. All pre-match plans are abandoned. Soon, you forget who’s playing. But it’s certainly not you. Must be an imposter—you are convinced. Before you come back to your senses, you’ve travelled so far down the rabbit hole that there’s no way back.

This happens to the very best. And happens across sport. But if there’s a sportsman that’s least affected by such situations, Novak Djokovic would be a top contender for that prize—based purely on results. True, he’s been guilty of angry outbursts and tantrums on occasions, especially when things haven’t gone his way. Yet, he’s seldom allowed that to adversely affect his performance on court. And this is what really sets him apart—the ability to compete without losing his mind or shape, no matter how unfavourable or long lasting the situation might be, whilst also keeping an eye out on the perfect moment to hunt down his prey. 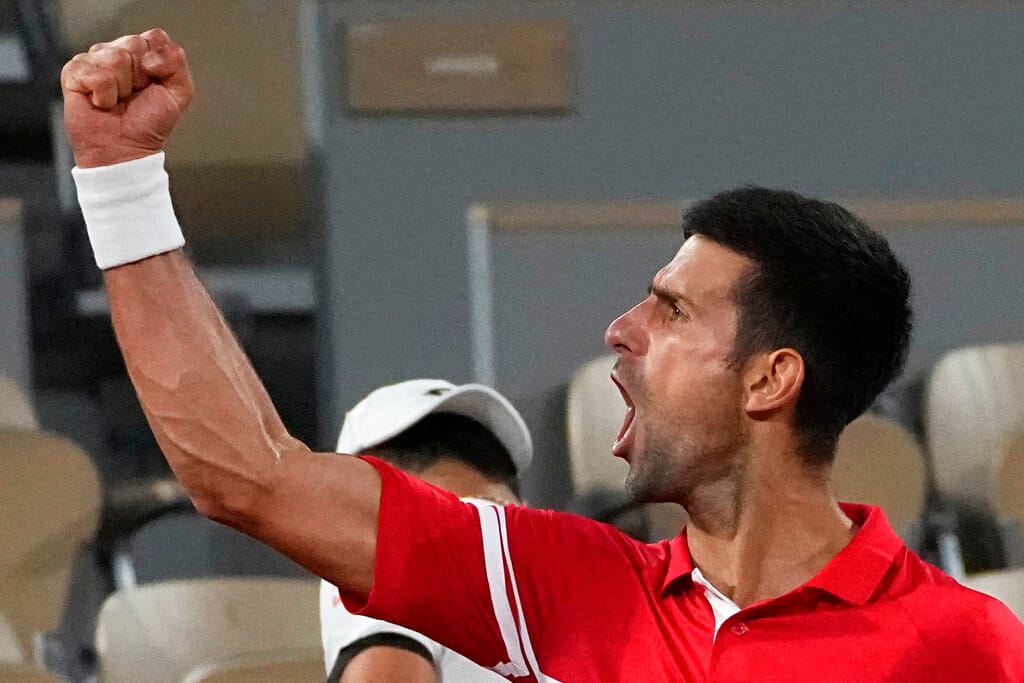 Not the one witnessed over a career—consistency over the duration of a match.

What’s a tennis match without its fair share of ebbs and flow. The momentum shifts ever so often. The trick is to be frugal in making mistakes when the flow is against you, whilst making merry when the tide turns. No state secret. But it's easier said than done. Mainly because it is humanly impossible to maintain the same level of play for long periods of time— four/five hours in some cases—especially when up against some of the very best in the business. Most players—even the best—will drop their level by several notches at various stages of the match. Djokovic himself is no exception. However, while the match graph for most players may resemble the Mumbai skyline—high skyscrapers interspersed with ground-level shanties, resulting in high fluctuations. Djokovic’s graph may mirror New York—skyscrapers competing with other, relatively smaller high-rises—eventually showcasing minor undulations in performance through a match. So while most of his rivals may oscillate between a purple and a rough patch, the 19 time Grand Slam champion will somehow manage his absolute best—point after point, game after game, set after set, match after match. The only other man who comes close to Djokovic in this aspect of the game is Rafael Nadal. Now, he too seems second best.

It’s this rare ability to combine ‘patience’ with ‘consistency’ that makes Djokovic arguably one of the greatest competition in all of sport. Consistency of play throughout a match, combined with bucket-loads of patience allows Djokovic to stay close on the heels of his opponent. The result: he never really is ever out of a contest—no matter what the scoreline or situation. As one commentator summed it up during a live tennis broadcast, “There are fine margins that decide big matches, but how often do those fine margins go Novak Djokovic’s way... that’s no coincidence.”

Djoko wasn’t gifted with these skills. He’s had to acquire them over the years in a bid to gain an edge over his more gifted rivals like Rafael Nadal and Roger Federer.

The Serb’s accession to the tennis throne after all wasn’t as smooth and sudden as both Rafa's and FedEx's. He made his professional debut in 2003, and had to wait five years before winning his first Grand Slam trophy- Australian Open 2008. Even that was termed as a ‘flash in the pan’ as he endured a dry spell for the next six years of his career. During this time he piled up enough retirements and lacklustre performances in the final stages of Grand Slam tournaments to develop a reputation of wilting under pressure. But something turned around in 2011, and with it emerged the player we are more familiar with today.

Post his latest French Open triumph, Djokovic had this to say to Stefanos Tsitsipas: “I can relate to what he's going through, and I understand how difficult it is to lose in the final. These are the kind of matches you learn from most, and knowing him and his team, he will come out much stronger.’

These weren’t just comforting words that the victor was offering the defeated, as is customary in sport. This was perhaps Djokovic giving a sneak peak into what led to him turning his career around.

Much was written and discussed about Djokovic’s fitness regime—the gluten free diet and time spent in oxygen chambers—after his 2011 resurgence. Whilst there’s no doubting the role supreme fitness levels play in the success of a modern-day athlete, in Djoko’s case, this worked as a catalyst; an agent of change that assisted the main driving forces— consistency and patience—in bringing about a transformational change. Perhaps this is what the tennis world means when it talks about Djokovic’s ‘mental toughness’ while trying to make sense of his phenomenal exploits on the court.