Born to Debendranath Tagore and Sarada Devi, he was also referred to as ‘Gurudev’, ‘Kabiguru’, and ‘Biswakabi’.

You can't cross the sea merely by standing and staring at the water: one of the several words written by the bard during his time in Bengal, this quote is a reminder for all of us to stay focused on the goal and achieve it using the right means Image source: News18 Hindi.

Celebrated annually and globally on May 7, Rabindranath Tagore Jayanti is celebrated on the 25th day of the Bengali month of Boishakh.

In remembrance and reverence for the polymath that Gurudev Rabindranath Tagore was, cultural programmes and events are held during the course of the day. Back in 2011, the Government of India had issued five rupee coins to mark and honour the 150th year of his birth. Rabindranath Tagore | The Bengali polymath- poet, writer, composer, philosopher and painter had reshaped Bengali literature and music, as well as Indian art with Contextual Modernism in the late 19the and early 20th centuries.

That said, let's take a look at some of the key facts about the first Asian who won Nobel Prize:

>> Gurudev became the first non-European to be awarded the Nobel Prize for Literature in 1913. He was bestowed with this coveted honour after the publication of his acclaimed collection of poems, Geetanjali. According to the Nobel committee, Tagore was recognised for the prestigious prize "because of his profoundly sensitive, fresh and beautiful verse, by which, with consummate skill, he has made his poetic thought, expressed in his own English words, a part of the literature of the West."

>> In 2004, Tagore's Nobel Prize at Visva Bharati University in Shantiniketan was stolen from the university's safety vault. The replicas of the stolen prize – one in gold and the other in bronze – were handed over by Sweden’s Nobel Foundation to the Visva Bharati university at a ceremony.

>> In an attempt to challenge conventional methods of classroom education, Tagore established a university of his own. Tagore used the cash he received with the Nobel prize and collected funds from around the world to set up Visva-Bharati University in Santiniketan, West Bengal where many classes were conducted under trees in open fields. 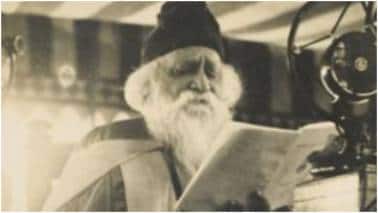 >> Tagore was awarded knighthood in 1915, two years after the poet received the Nobel Prize for Literature. He returned the title on May 31, 1919, to protest against the Jallianwala Bagh massacre on April 13.

>> Tagore was a very close friend of Mahatma Gandhi despite their disagreements on a variety of issues, including nationalism, cultural exchange, patriotism, economy, etc. As a matter of fact, it was Tagore who conferred the title of ‘Mahatma’ on MK Gandhi in 1915. >> Rabindranath Tagore wrote the national anthems of two countries, India and Bangladesh, “Jana Gana Mann” and “Amar Shonar Bangla”. Not just that, he even deeply influenced the words and music of a third-the Lankan national anthem, ‘Sri Lanka Matha’.

The man who reshaped and rejuvenated India's art and culture the Bard of Bengal died on August 7, 1941, aged 80. Even decades after his death, his work continues to inspire countless generations of young artists around the world.
Moneycontrol News
Tags: #Rabindranath Tagore Jayanti
first published: May 7, 2021 08:30 am