"My life has turned 180 degrees. My goals are different," Stipe Pleic says of his dramatic transformation, citing the harmony that comes with the Viking lifestyle.

Stipe Pleic, also known by his Viking nickname of Ragnar Kavurson, poses in front of a display of the weapons he has created in the western-Bosnian town of Tomislavgrad.

With his thick grey beard, plaited hair and an arsenal of medieval weapons, Bosnia's "first Viking" relaxes by hurling axes in the attic of his stone cottage.

Over the past five years, Stipe Pleic has undergone a steady transformation from builder to Nordic warrior in homage to the popular television show "Vikings".

The metamorphosis began after Pleic returned home to Tomislavgrad in southern Bosnia after years working on construction sites in Germany.

What started as binge watching evolved into an obsession with the show's protagonist Ragnar Lothbrok and the lives of the Nordic warriors, who launched raids across large swathes of Europe between the 8th and 11th centuries.

"I had a lot of free time because I live alone here. And then when I was watching the series I saw Ragnar's axe, I liked it and wanted to do the same," says the 57-year-old, who also works as a driver for the regional government.

Following in Ragnar's footsteps, he began making weapons by hand, decking the walls of his cottage with swords and shields, and dressing the part. 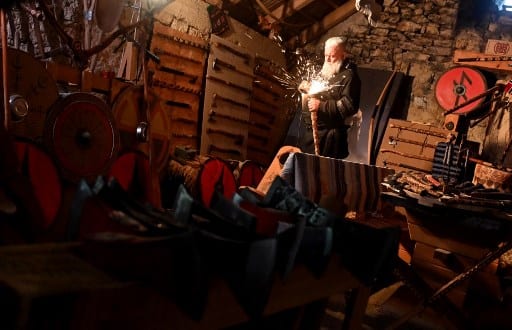 Stipe Pleic, also known by his Viking nickname of Ragnar Kavurson, works the metal head of a 'viking weapon', in the western-Bosnian town of Tomislavgrad.

Wearing a tunic and matching trousers, the towering Pleic could easily pass for one of the show's main characters.

His workshop now resembles a movie set, complete with an axe-studded throne and fox fur armrests.

And in his garden, he has built a replica of a drakkar -- a flat-bottomed boat capable of crossing oceans -- which he occasionally sails on a nearby lake.

"My life has turned 180 degrees. My goals are different," Pleic says of his dramatic transformation, citing the harmony that comes with the Viking lifestyle.

He has even taken on a new persona -- Ragnar Kavurson -- a reference to both the name of his hometown during the Ottoman era and the word for "miscreant".

Over the years, he has made hundreds of axes, spears, bows, shields and pretty much anything else he spots on the TV show. Some projects take weeks of meticulous work to finish. 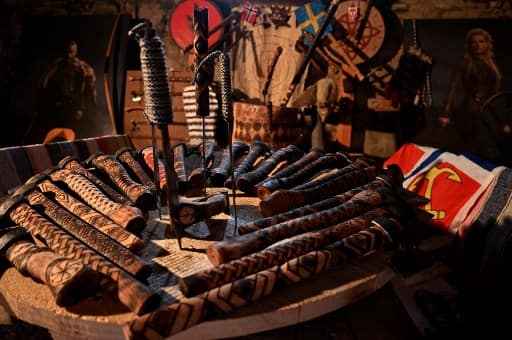 A display of axes and knives at workshop belonging to Stipe Pleic, also known by his Viking nickname of Ragnar Kavurson, in the western-Bosnian town of Tomislavgrad.

Most of his hand-crafted axes have been offered to friends or sold, with some pieces fetching up to 300 euros ($330).

"I put a bit of myself into each of these," Pleic explains, adding he also practices throwing axes every day, alone or with friends.

"It is also a discipline that is recommended by psychiatrists. It's very relaxing," he says.

In the future, he hopes to share his obsession with others by organising the first Bosnian axe-throwing championship and building an entire Viking village for tourists.

"I used to earn more money per day in Germany than I do now per month," he says. "But I wasn't happy. Now I am happy."