Upcoming Webinar:Watch a panel of experts discuss: Challenges of continuously evolving regulation for Cryptocurrency, on 7th July at 3pm. Register Now
you are here: HomeNewsTrendsLifestyle

Owner of Chai Pani, 'America's most outstanding restaurant': No other food captures essence of India like street food

Opened by Molly and Meherwan Irani in 2009, Chai Pani Ashville was this year named the most outstanding restaurant in America at the James Beard awards.

Molly and Meherwan Irani of Chai-Pani restaurant in North Carolina, US. (Photo by Molly Milroy)

Chai Pani, a restaurant in North Carolina, US, was named the most outstanding restaurant in America at the 2022 James Beard Awards announced earlier this week. We caught up with its founder-chef Meherwan Irani for a brief tête-à-tête.

What does Chai Pani represent in terms of Indian street food?

That Indian food is so much more diverse, interesting, unexpected, personal than the handful of regional cuisines that have been popularized so far. I firmly believe there is no other food that captures the essence of India like street food - chaotic, colorful, innovative, vibrant, joyful, complex, and of course delicious.

Your favourite street food of India?

Bhel Puri. It's India on a plate for me. An ingredient you can't work without?

No such thing as ‘the one ingredient’. But if I had to highlight one, it would be fresh ginger - mostly because I can't live without it in my chai!

It's the essence of the approachability of Chai Pani. I wanted to serve Kheema Pav in a way that would be familiar and bridge the cultural divide between a Parsi dish and Americans, something that they have never tried... So, by simply assembling it like a Sloppy Joe sandwich and a clever name, it's become one of our most famous dishes.

What is your comfort food?

What are the main flavours of Parsi food?

Sweetness and sourness from vinegar, tamarind, dates, jaggery are the characteristics of many Parsi dishes.

The dish you feel has the most difficult preparation...

Indian food is one of the most labour-intensive cuisines in the world. Any gravy or curry is an exercise in patience, layering, temperature control, and technique. Often, the complexity of our curries and gravies and sauces is diminished by shortcuts and premade ingredients.

Any misconceptions that Americans have about Indian food?

That it's all ‘spicy’ (as in heat). Chillies are not native to India, and were introduced by the Portuguese during the age of exploration. Prior to that for thousands of years our dishes were complex and spiced without killing it with heat.

Do you cook every day? And what do you like to cook for a family dinner?

My wife (and co-founder of Chai Pani) Molly does the daily cooking at home. At home, I mostly cook for parties, gatherings, holidays, etc., or when my daughter requests for dosa and Parsi-style potatoes. I eat out a lot because I love discovering new restaurants and dishes.

What changes now, after getting the award?

This award means so much more than if I'd won just as a chef, because this award acknowledges EVERYONE who works to make a restaurant exist. The work now begins to live up to everyone's expectations of what it means to be an ‘Outstanding Restaurant’. For me, the work is as much about our food and hospitality as it is about what we do outside of the four walls - within our communities and beyond.

What advice would you like to give for future aspirants?

My advice to anyone who wants to be a chef or restaurant is to obsess over three things:

1) Are you doing something that's authentic to who you are?

2) Are you obsessing over your food being delicious and your hospitality being kind and compassionate?

3) Are you doing something meaningful for the community that you serve?

Do those three things well. If you are great at these, the accolades will come.

Had you always wanted to own a restaurant? If not, what had you wanted to be?

I wanted to be involved in food somehow within a few years of arriving in the US for my graduate degree. I was obsessed with the idea that Indian food could be so much more diverse and interesting if someone just took a chance on doing something different. I didn't think that opening my own restaurant would be how it would happen! 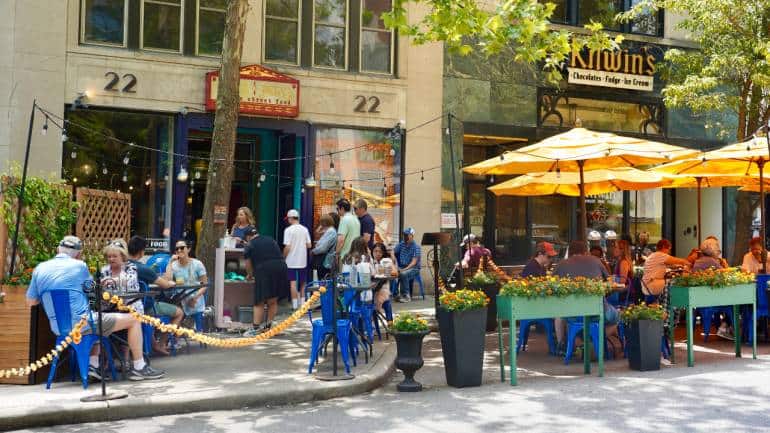