In the wild world of tech hiring in India, engineer is now king

The COVID-19 pandemic-led internet and technology boom has led to an accelerated shift to digital.

A recruiter in India recently shortlisted a candidate with eight years of experience in DevOps, an acronym that combines software development (Dev) and IT operations (Ops), for a multinational company. The candidate struck gold in a way that would have been implausible even six months ago.

In another instance, a fresher with a couple of years of experience and a salary of Rs 30,000 per month suddenly saw his annual pay zoom to Rs 18 lakh, given his specialisation as a full stack developer. A data analyst recently had seven job offers from a mix of IT firms, start-ups and product companies, before he accepted the eighth one.

Stories like these abound in the wild world of tech hiring in India, where the engineer is now king. It is bad enough that even Bhavish Aggarwal, founder of Ola, took a dig at this in a tweet saying, "Engineering hiring situation in Bengaluru - thinking of offshoring some work to a lower cost center in SF, Bay Area!"

The tech talent job market, which started looking up after January this year, is now so hot that dropout rates, a term used to refer to people who do not join a firm after landing an offer, has touched north of 50 percent, as candidates are sitting on multiple job offers, making it harder and costlier for companies to hire talent.

The COVID-19 pandemic-led internet and technology boom has led to an accelerated shift to digital, with software companies, startups, and multinationals now vying for technology talent to fulfill the booming demand for technology and software services. Auction or bidding isn’t a word that one usually associates when it comes to hiring. But there is no other word that best describes the tech hiring scene, one that is unlikely to end at least for the next few months, as these companies outbid each other to get the talent on board.

Over the last few months, the demand for technology skills has skyrocketed, and techies are making full use of the momentum that has gripped the market. According to industry executives, with multiple offers on hand, financial incentives have become the biggest inducement for people to decide on offers, and companies have no option as the demand and supply gap widens.

“There is a rapid digital transformation across sectors. Every physical chain now wants a digital presence. For example, A Domino's pizza, H & M or a Uniqlo want their own app and that means demand for digital talents, who can help the company transition to this," said Hitesh Oberoi, CEO, InfoEdge, which runs one of India's biggest job portals Naukri.com.

Oberoi says dropout rates are at a decadal high, as only 20-30 percent of candidates end up accepting an offer and said the current offshoring boom is reminiscent of the 2005-07 period.

" The dynamics of the IT and startup world are different. While the startup hiring is driven by the funding boom in the last couple of years, in IT, there is a supply gap because not many freshers came into the system in the last few years. The current market is very good for the Naukri business but hard for me as an operating manager because I also find it tough to hire tech talent," he quipped.

In fact, according to the Naukri JobSpeak report for July 2021, hiring activity in India has touched an all-time high, indicative of a strong revival of economic growth after the COVID-19 blow.

The IT-Software/Software Services sector saw an 18 percent increase in July 2021 sequentially. By June 2021, this sector had grown past the pre-pandemic levels in June 2019 by as much as 52 percent. Prominent IT hubs such as Bengaluru (+17 percent), Hyderabad (+16 percent) and Pune (+13 percent) witnessed double-digit growth in hiring during July 2021 vs June 2021

As multiple executives pointed out, technology is no longer a nice-to-have, but the backbone for business and customer engagement, driving the need for new-age skills such as data analytics, full stack developers, and machine learning engineers.

But the skills available in this area are limited, with demand far outstripping the supply driving up the salary for those with technology skills, resulting in increased dropout rates and salary costs.

Sriram Rajagopal, Co-founder, Diamondpick, a company that helps some of India's largest software companies hire experienced professionals, said, that demand has gone up after January this year, with the dropout rate touching as high as 60 percent, with some companies willing to pay almost 15 percent of the base pay as joining bonus to snap up candidates.

For comparison, the dropout rates were anywhere between 7-15 percent last year, according to data from specialized staffing firm Xpheno. Now it is over 50 percent, as each candidate has 3-4 offers, giving them the option to choose the firm that has a better salary incentive. 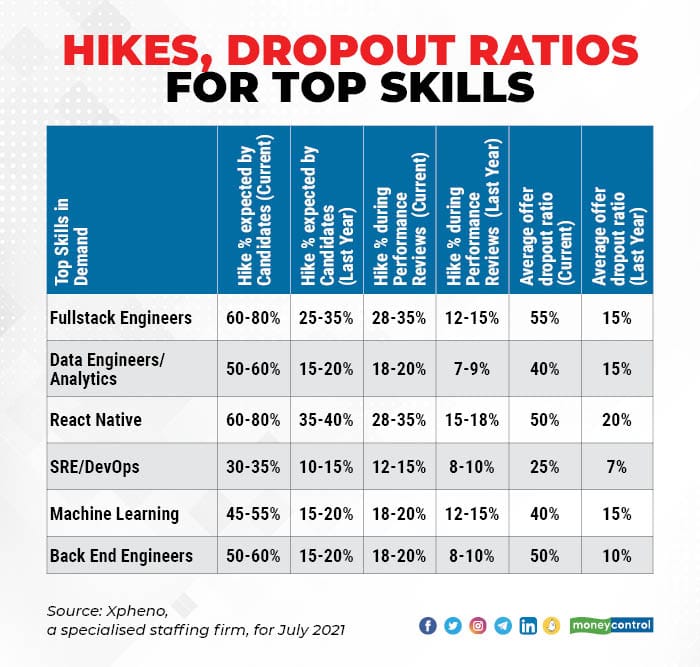 Interestingly, while people specializing in full-stack, MEAN stack, a collection of Java-based technologies for application development, Salesforce, Service Now, and cloud-native Java command huge hikes that can go up 90 percent, even basic Java developers are now getting hikes of up to 50-60 percent. The salary gap between technology captives of multinational companies and Indian IT companies, which used to be at least 30 percent is now blurring, with the latter now paying more aggressively.

“For example, a person gets a job offer and has resigned. Portals like Naukri have an option to find out which candidates are in their notice period and recruiters reach out to them. So, the candidate spends the next two months of his notice period bettering his offer with one offer after another and finally joins the company that pays him the highest at the end. This makes it very difficult to predict onboarding. People complete the entire onboarding process and don’t turn up on the day of joining,” says Rajagopal of Diamondpick.

“So this is like a bidding process, where the highest bidder gets the possession,” says a Bengaluru-based hiring executive, who did not want to be named. Only here, the process is never a level playing field. Companies, especially well-funded startups are more than willing to pay a salary that not many IT firms and multinationals can match.

A case in point is the perks that FinTech firm BharatPe is rolling out to attract talents. This includes BMW bikes and a trip to Dubai for T20 Cricket that will be held later this year. Such incentives more often than not could tilt the balance, favoring startups.

“There is no way to tackle this except pay higher. It is a candidates’ market now because companies fear they will lose out on business if they can't deploy people on time” the hiring executive said.

For instance, during the earnings call for the quarter ending March 2021, Cognizant CEO Brian Humphries said that the company had to let go of business due to a lack of talent.

While the companies are aware that these hiring practices are not sustainable, there is hardly an alternative in the short term given that the supply is limited.

There are a few things companies are doing to address this issue. Sunil C, Head – specialized staffing, Teamlease Digital, said that hire and train models are becoming common with more visibility on projects. “This works when there is a clear mandate on the demand needed in the next few months,” he said. In this model, experienced professionals are skilled/upskilled in specific skill requirements that companies have so that they can be deployed on day-1 of the project.

The other trend is to hire more freshers, which is what the top IT companies are doing. The top four IT firms will hire 1.1 lakh freshers in FY22, up 30 percent from last year.

Wipro CEO Thierry Delaporte said, “Growth is our priority and we will ensure that talent supply is not a constraint to our mission.” To cater to the demand the company is now hiring, stepping up its fresher hiring.

The company plans to hire 33 percent more freshers this year than in FY21. To ensure that there are no supply-chain pressures, Saurabh Govil, chief human resources officer, said, “We are hiring an unprecedented number of freshers into the organization. We will be on-boarding 6,000 freshers in Q2, the highest Wipro has done, and will roll out 30,000 offers later this year for freshers to join in FY23.”

According to Govil, the company has a huge pipeline building up to manage the people supply chain. “We will see attrition at the heightened level and a lot of dropouts in the next quarter. But we are confident about managing the situation and this will not affect the revenue growth,” he added.

During the earnings call on July 19, HCL’s chief human resources officer VV Apparao said, “Last year we on-boarded 14,600 freshers globally and this year we are targeting anywhere between 20,000 to 22,000 freshers. I will not be surprised if we even cross that number.”

Infosys Chief Operating Officer UB Pravin Rao said during a recent earnings call that as the demand for digital talent was exploding, and rising attrition posed a near-term challenge. “We plan to meet this demand by expanding our hiring program of college graduates for FY22 to around 35,000 globally,” he said.

Cognizant is stepping up lateral and fresher hiring to cater to the growing demand. "We now expect to hire approximately 100,000 laterals in 2021 and to train close to 100,000 associates. In addition, we expect to onboard approximately 30,000 new graduates in 2021 and make 45,000 offers to new graduates in India for 2022 onboarding," Cognizant CEO Brian Humphries told analysts after the company posted strong earnings for the second quarter ended June.

As Charles Dickens wrote in his novel over 160 years ago, "it was the best of times, it was the worst of times." The line could well apply to what technology companies are facing today. The demand for software services is booming again, but so is the war for talent, which may cast a shadow on their costs and margins in the coming months.
Swathi Moorthy
Chandra R Srikanth is Editor- Tech, Startups, and New Economy
Tags: #Hiirng #India #War for talents
first published: Aug 9, 2021 09:42 am