The UAE, like other Gulf countries, goes into partial hibernation during its long, hot summers, with those who can afford it staying cloistered in air-conditioned homes and workplaces.

As the Gulf's increasingly fierce temperatures become dangerous to health amid fears over the pace of climate change, those who can afford not to work outside in the blazing sun stay inside in air-conditioning. And for owners of pampered pets able to splash the cash, an air-conditioned gym for dogs has become an attractive option.

Oscar beats the summer heat of the United Arab Emirates by working out in a gym, hitting the treadmill twice or three times a week. Nothing unusual in that -- except that Oscar is a dog.

As the Gulf's increasingly fierce temperatures become dangerous to health amid fears over the pace of climate change, those who can afford not to work outside in the blazing sun stay inside in air-conditioning.

And for owners of pampered pets able to splash the cash, an air-conditioned gym for dogs has become an attractive option.

"During the winters I used to take him outside, but (in) summers he used to stay isolated," says Oscar's owner Mozalfa Khan, a Pakistani expat.

"Because whenever I take him outside he's sick because of the heat."

The resource-rich Gulf is among the regions most at risk from global warming, with some cities facing the prospect of becoming uninhabitable by the end of the century.

Temperatures often soar above 45 degrees Celsius in the UAE, and can remain above 40C even after midnight. 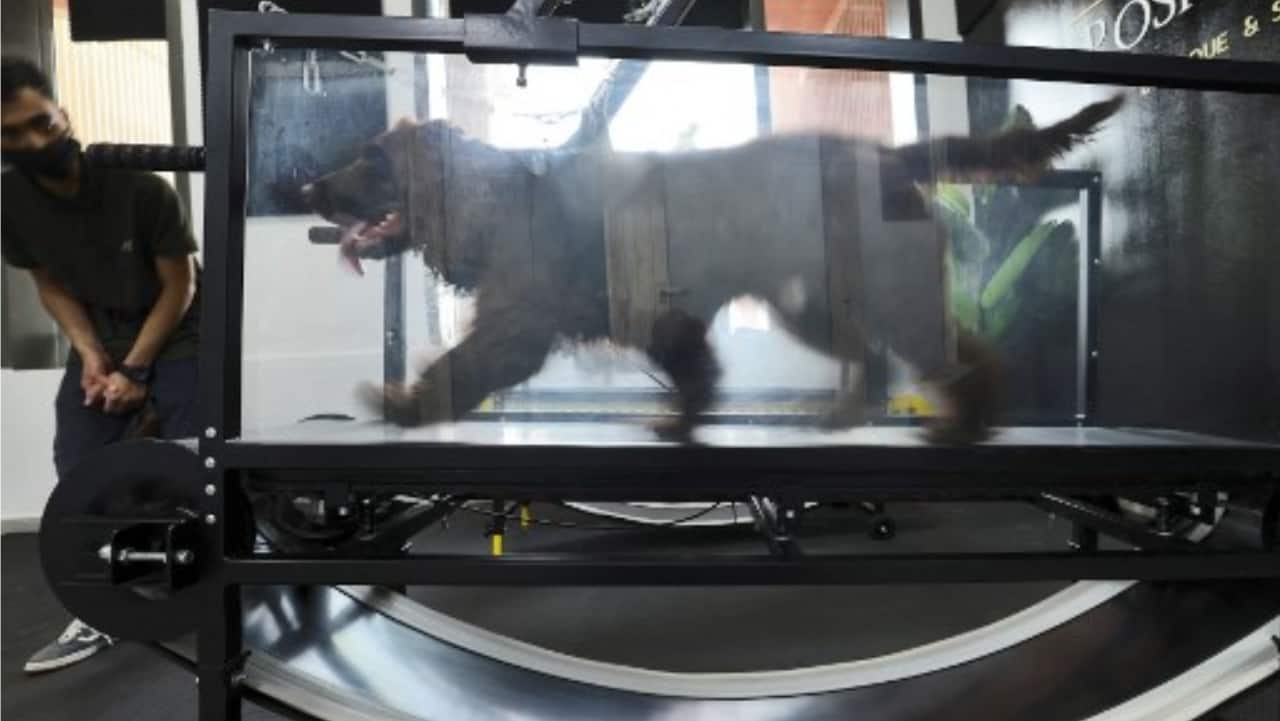 A dog runs on a treadmill at the 'Posh Pets' boutique and spa in Abu Dhabi.

Oscar, a Welsh Corgi, now works out at Posh Pets Boutique and Spa in Abu Dhabi, a shop and grooming salon that offers what's billed as the UAE's first gym for dogs.

Staff carefully secure him with a harness on one of two adapted running machines before he begins to run, with glass barriers on either side to stop him falling off.

Rather than being set to specific speeds, the treadmills automatically adjust themselves to the pace of each dog.

Oscar's owner started bringing him to the gym in the Emirati capital after a vet advised against walking him outside in summer because of the risk of heat stroke.

"Last summer it was really difficult for me because there was no place like this," says Khan.

With the high heat and humidity, "we walk for only two, three minutes and he's done, he doesn't want to walk".

Mansour al-Hammadi, the dog-loving owner of Posh Pets, charges a dirham (Rs 22) a minute for use of the treadmills, or about Rs 600 for a half-hour run.

Dogs should exercise at least 30 minutes a day, experts say.

"So imagine when you can only walk them one or two minutes a day," Hammadi tells AFP.

"We've closely studied the project to make it 100 percent safe. Everything was chosen with care and not at random, to avoid any future problems and so as not to harm the dogs," he adds.

Read more: A look at some of the lesser known dog breeds native to India

Destiny, a seven-month-old German Shepherd, is another regular, bursting into the gym and playing with the other dogs.

"For the dog's health, it's better that she does some exercise and tires herself out," says Destiny's owner Fahed al-Monjed. "Using an indoor running machine is the best solution."

Destiny may indeed take some tiring out. In a recent competition on the treadmills, she set the fastest speed.

(With inputs from AFP)