The Drugs Controller General of India (DCGI) has cleared the 2-deoxy-D-glucose (2-DG) drug for emergency use, the Union government said on May 8. The new oral anti-COVID drug, developed by the Defence Research and Development Organisation (DRDO), expedites the recovery of hospitalised patients, reduces dependence on medical oxygen and caused no major side-effect in the clinical trials.

Here is all you need to know about the new oral anti-COVID drug:

How 2-DG drug is administered

"The drug comes in powder form in sachet, which is taken orally by dissolving it in water," the Ministry of Defence said in a statement that announced the clearance of the DRDO-developed drug for emergency use.

How it works in treating COVID-19 infection

The 2-DG drug accumulates in the virus-infected cells and prevents virus growth by stopping viral synthesis and energy production. "Its selective accumulation in virally infected cells makes this drug unique," the ministry explained.

According to the government, the clinical trials have shown that a significantly higher proportion of patients administered with the 2-DG drug "became free from supplemental oxygen dependence" by the third day of their treatment, in comparison to those who were not administered with the drug.

This indicated an "early relief from oxygen therapy/dependence", the Ministry of Defence noted in its statement.

The clinical trials established that a higher proportion of those administered with the DRDO-developed drug "improved symptomatically" by the third day of their treatment, as compared to those provided the standard treatment.

"In the ongoing second COVID-19 wave, a large number of patients are facing severe oxygen dependency and need hospitalisation. The drug is expected to save precious lives due to the mechanism of operation of the drug in infected cells. This also reduces the hospital stay of COVID-19 patients," the ministry said. 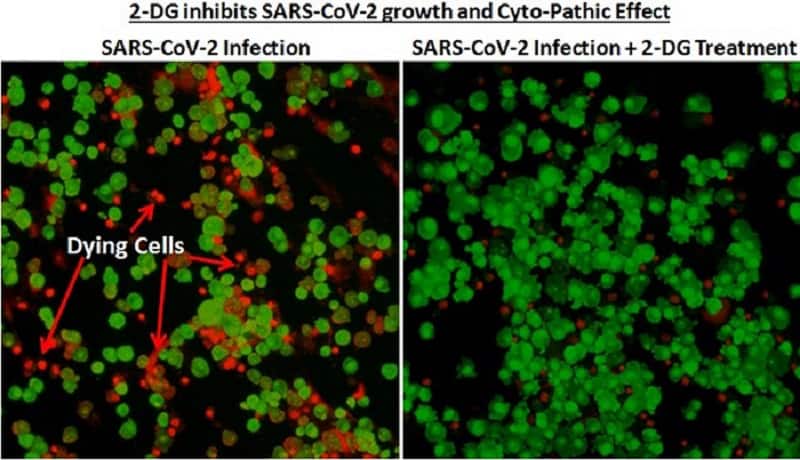 The Institute of Nuclear Medicine and Allied Sciences (INMAS), a lab of Defence Research and Development Organisation (DRDO), developed the anti-COVID-19 therapeutic application of the drug 2-deoxy-D-glucose. The institute worked in collaboration with Dr Reddy’s Laboratories (DRL), Hyderabad.

"In April 2020, during the first wave of the pandemic, INMAS-DRDO scientists conducted laboratory experiments with the help of Centre for Cellular and Molecular Biology (CCMB), Hyderabad and found that this molecule works effectively against SARS-CoV-2 virus and inhibits the viral growth," the government said.

Based on the results of INMAS-DRDO scientists' laboratory experiments, the regulatory authorities had granted permission for phase-II clinical trials in May 2020.

In Phase-II trials conducted from May to October 2020 on 110 patients, the "drug was found to be safe in COVID-19 patients" and showed significant improvement in their recovery, the government said.

"In efficacy trends, the patients treated with 2-DG showed faster symptomatic cure than Standard of Care (SoC) on various endpoints. A significantly favourable trend (2.5 days difference) was seen in terms of the median time to achieving normalisation of specific vital signs parameters when compared to SoC," the statement added.

Based on successful results, the DCGI further permitted the Phase-III clinical trials in November 2020, which was conducted on 220 patients.

"In 2-DG arm, significantly higher proportion of patients improved symptomatically and became free from supplemental oxygen dependence (42 percent vs 31 percent) by Day-3 in comparison to SoC, indicating an early relief from Oxygen therapy/dependence," the Ministry of Defence said.

This trend of recovery was also observed in patients aged more than 65 years who were administered with the drug, it added.
Moneycontrol News
Tags: #2-DG Drug #coronavirus #Covid-19 #DRDO #Medical Oxygen #Ministry of Defence
first published: May 8, 2021 05:53 pm