Upcoming Event:\Option Writing Masterclass by Shubham Agarwal: a session power packed with lots of intelligence and tactics required to sell write options, on 13th July at 5pm. Register Now
you are here: HomeNewsTrends

From caste on Tinder to Love Jihad, the complex facets of love in India

Scholar and university professor Dr Debotri Dhar’s new book of essays looks at love from a point of view of gender, culture and politics.

How many love marriages do we know of between Brahmins and Dalits? Why are independent single women only presented as unhappy spinsters in popular culture? These and other questions are raised by author, editor and columnist Dr Debotri Dhar in her latest book of essays, Love is Not a Word: The Culture and Politics of Desire (Speaking Tiger, 2020).

In this interview, she talks about her book and the many facets of love – personal, social, cultural and political.

How did you think of putting together a book about the different facets of love and its evolution over the years?

Love, as a word, is so ubiquitous in our lives, our languages – we use it all the time, piling our “much love,” “love you,” “love one another,” “love the earth,” bhalobasha, prem, ishq, amore, one on top of the other. Yet, what is gained in height is sometimes lost in depth. How often do we consider the many nuances of love in literature, culture, history, metaphysics, politics, and their interstices, or the continuities and changes over the decades?

Love can be, at once, art, insight, event, encounter, aporia, utopia, ethic. That is what I was thinking when I decided to put together this serious yet lively book of essays on love. While a lot of its focus is on India, it is also in conversation with “Western” and transnational ideas.

Tell us about the process you went about to collect the 12 essays for the book.

The contributors are scholars, journalists, essayists, and art and literary critics who have been doing compelling work in their respective areas. While I’ve published several essays of my own, this is the first book-length collection of essays I have edited.

In the past, I have edited original collections of academic papers (such as Education and Gender) and of literary fiction. Of all my books, single-authored as well as edited volumes, this one took the longest! (We’re talking years.) Some essay ideas were not a good fit for the book, the publisher also had a role, and some essays were commissioned later. I think we have a lovely book, and I can’t wait for it to make its way to America so that I can hold my baby in my hands!

The book explores themes ranging from caste and Tinder, the lives of single women, lesbian relationships, to the Hindutva ‘love jihad’ crusade. Tell us how you decided on these.

These are the lesser discussed aspects of love. Take the lives of single women, for instance. My essay questions why marriage and motherhood must always be seen as essential for heterosexual women who, in world literatures (fairytales and fables, fiction, drama) and across cultures, are often depicted to be in a perpetual state of waiting for men.

Independent women have always existed in life; why can we not exist in literature, except only as unhappy spinsters? In fact, creating independent female characters was one reason I wrote my postcolonial novel The Courtesans of Karim Street, a story set in India and the US straddling the past and the present – and so my own essay in Love is Not a Word also talks about readers’ responses to that novel.

When I was writing my dissertation, I was dismayed to find that formal university education does not always stop people from seeking partners of the same caste through matrimonial columns. Many Indians believe that caste no longer plays a role in our lives as long as we do not engage in caste-based arranged marriages.

My parents, grandparents, sibling and close friends have all had love marriages; most are inter-caste. But it took personal reflection as well as political conversations with Dalit friends for me to realise that even these inter-caste marriages are mostly among savarnas. 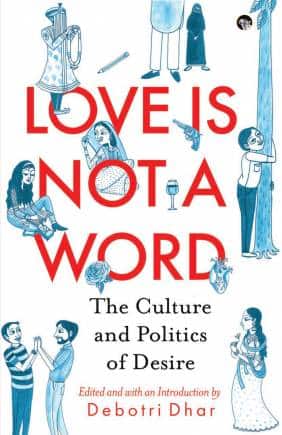 How many love marriages do we know of between Brahmins and Dalits? Thus, the important essay on caste and Tinder in the volume, exploring how modern technologies and dating apps can often coexist alongside casteism and pointing out how, in a cis-heterosexual context, poor as well as Dalit women may be sexually exploited by rich or upper-caste men. In that sense, caste in an Indian context and race in an American one have several similarities, as I explain in my introduction to the book.

Same-sex love was also an important theme for this book, especially given the Supreme Court’s ruling on Section 377 of the Indian Penal Code, the colonial “anti-gay” law. Discussions on same-sex relationships in India typically focus on gay men, so I am glad we have an essay on lesbian relationships that combines the personal and the political with honesty and depth.

The ‘love jihad’ campaign was also important from a political perspective because of the problematic nature of the “our women, their women” logic undergirding such movements that forbid women from marrying outside their religious or ethnic communities.

Ultimately, love has to be the answer, love based not on exploitation, fetishising or an erasure of differences but a mutual, affirming celebration of each other’s uniqueness, similarities and equality.

From Meghduta onwards, India has a rich tradition of desire-based poetry. Which are some of your favourite verses?

It’s interesting that you mention Kalidasa’s Meghduta (The Cloud Messenger)! My introduction to the book also mentions this Sanskrit lyric poem, which narrates how, in the wet, quivering season of asadha, a yaksa exiled in Ramagiri entreats a passing raincloud to carry his message of love to his beloved left behind in the ancient city of Alaka. Yes, India indeed has a rich tradition of desire-based poetry, in many different languages, and detailing all my favourite verses would take up an entire book of its own! So, let me mention just two.

The first is Tagore’s Gahana kusumakunja maajhe, mridula madhura bangshi baje, bisari traasa lokalaaj, sajani, aao aao lo about the unconventional, passionate, beautiful love between Radha and Krishna, whom we worship. (There is an essay in the book on the theological impetus behind the emergence of Radha in Vaishnava literature, which until then suffered from a “Goddess-lack,” and how this narrative might pose a challenge to the Gandhian model of sexual austerity). Tell our readers how the book seeks to break stereotypes that are commonly associated with women, for instance Dalit or Muslim women.

These stereotypes are unfortunate, and I hope the book breaks them not only in words but in deed, in that we have literary contributions by a single woman, a Dalit woman and a Muslim woman, among others. At the same time, I hope we don’t reduce writers, their craft and their immense talent only to their caste, religion, and so forth. It is a fine balance.

According to you, do different women view desires differently? Are there any common influences that shape the desires of an urban woman as opposed to a conservatively bought up woman or a lesbian woman?

Of course, not all women view love and desire the same way. In women’s studies, we talk about intersectionality: how different registers of identity such as gender, social class, race, caste, sexuality, age and disability intersect to create different interlocking structures of power and privilege.

That said, seeing our experiences as belonging to entirely discrete, airtight categories is problematic – urban, rural, lesbian, transgender and cis-heterosexual women can all face street harassment in similar as well as different ways.

I also think that when it comes to love and desire, the perceived textbook binary between social structure and individual choice is a false one, as they both play a role. Otherwise, any two individuals with the same identity and within the same social context would have exactly the same beliefs, lived practices and life outcomes, and we know that is not true either.

Is there a lack of scholarship in India when it comes studies about rural Indian women of different castes and regions?

That is an excellent question. I wonder if there is a lack of scholarship on rural Indian women as such, or if the bigger and more complex issues pertain to representation and authenticity, with western, urban and/or upper-caste scholars often representing the interests and needs of rural or tribal communities they themselves are not a part of.

To be an ally is one thing; but I do think we should try and make space for those who are most directly impacted by issues to tell their own stories. I am an idealist, I believe there is space for all our stories.

Which are some of your favourite films on the diversity of romantic traditions in India?

Oh, so many! I have liked films like Mani Ratnam’s Bombay, on inter-religious love. I watched Margarita with a Straw, on issues of disability and sexual identity, and Aligarh, based on the true story of a gay professor who was expelled from his university because of his sexuality.

I love feminist cinematic re-engagements with mythology: one of my favorites is Panchvati starring Deepti Naval, based on the novel Ek Aur Panchvati. The hugely talented queer director Rituparno Ghosh’s Bengali movies, like Dahan, Abohoman, Arekti Premer Golpo and Chitrangada, were also on gender identities, and the limits and possibilities of love.

I also love films like Queen where self-love is celebrated, because they encourage women to not be subservient and to live life on their own terms.

Which are some of your favourite paintings portraying love and desire of women?

I want to speak of art more broadly, because we have such a rich artistic tradition of love and desire right from the Khajuraho temples and the Ajanta and Ellora caves. Then there are pioneers like Amrita Sher-Gil with their hybrid styles, and contemporary artists like Anjolie Ela Menon.

I find Gogi Saroj Pal’s nudes very poignant; the solitude of her women, the broad brush strokes, speak to our shared anguish. While all art is an act of imagination, I do think that when women present their own desires – in contrast to being represented and imagined by the male artist/spectator/gaze – the artistic outcome can be markedly different. (John Berger has some excellent work on this, which I use in my women’s studies syllabi.)

Your work in the past has covered novels, short stories, scholarly books and essays. What are the challenges of each, and which do you enjoy the most?

For me, the biggest challenge is one of time rather than of genre, as I lecture full time at the university. My creative writing is an extension of my scholarly work and is shaped by my academic areas of specialisation. I enjoy them all; writing brings me respite and a tremendous sense of satisfaction that my work, transnationally, reaches beyond just academia.