Contest Alert:Last day to win Amazon vouchers worth Rs 5000. Take the MCPRO Quiz today to grab yours!
you are here: HomeNewsTrends

Vienna, in Austria, missed the top point by only 0.1 percentage points

Australia's Melbourne city has been ranked as the most “liveable” city in the world for the seventh consecutive year by the Economist Intelligence Unit.

The Australian city, that scored a rating of 97.5 out of 100 points on the Liveability Index this year, had first claimed the throne in the benchmark report back in 2010.

As per the “Global Liveability Report”, 140 cities have been ranked in order of their best living conditions.

The ‘liveability’ of a city is ranked as per what locations around the world provide the best or worst living conditions.

Every city is assigned a rating of relative comfort for over 30 qualitative and quantitative factors across five broad categories: stability, healthcare, culture and environment, education and infrastructure. Each factor in a city is rated as acceptable, tolerable, uncomfortable, undesirable or intolerable. 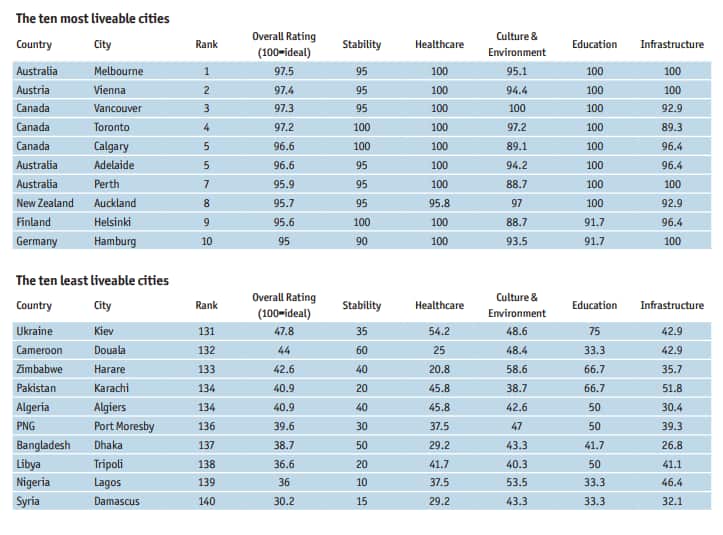 The extreme ends: The ten most liveable and least liveable cities in the world (Source: EIU Global Liveability Report 2017 Overview)

Melbourne scored a perfect 100 in healthcare, education and infrastructure and 95.1 for culture and environment and 95 for stability.

Vienna in Austria stood second and Canadian cities of Vancouver, Toronto and Calgary took the next three positions. Another Australian city - Adelaide - tied with Calgary for the fifth place.

The two other Australian cities that featured in top 15 were Perth, which stood seventh and Sydney which was ranked eleventh. Sydney experienced a rank drop possibly due to global terror concerns.

Melbourne’s 97.5 score was zeroed down after its perfect assessments of healthcare, education, infrastructure, stability, culture and environment.

Vienna, in Austria, missed the top point by only 0.1 percentage points.

Reasons for cities faring worst that include Karachi in Pakistan and Dhaka in Bangladesh were mostly attributed to civil unrest, war and political strife.

Damascus in Syria, that held the lowest position, scored only 30.2 points overall as it continues to undergo a brutal infighting between the Assad government and Islamist rebels.

The report stated that although the top five cities have remained unchanged, “ the past few years have seen increasing instability around the world, causing volatility in the scores of many cities.”