Writers' Building in Kolkata stands at the intersection of architectural heritage, history, politics

Writers' Building is in need of renovation and restoration. Over the years, restoration experts and architecture teams have weighed in. But the task is far from simple.

For decades, the imposing architecture of the 241-year-old Writers’ Building was a matter of pride for India. But now, Writers’ Building, Kolkata’s first three-storied structure, needs a serious facelift.

The neo-classical, red colonial edifice with its majestic Corinthian columns, built around 1780, stands at the cacophonous BBD Bagh intersection. It has been a silent witness to India's and Bengal's history, and was once considered the permanent seat of the West Bengal government.

But the building has lost some of its glory since the Trinamool Congress (TMC) defeated the three-decades-old Marxist government.

Almost instantly, Writers’ Building fell from the eyes and imagination of the Bengali commoners, and also the city’s bhadralok, as aptly described by Bengal’s octogenarian Marxist leader Biman Bose. The chairman of the West Bengal Left Front Committee feels the building still has relevance.

“The Writers’ is holding on its own. It will rise if and when we (the Left Front) assume power. I have nothing more to say,” Bose said. However, the chances of a Left Front victory in Bengal, claim the state’s political cognoscenti, are far from good. The Left Front didn't win even a single seat out of the 292 assembly seats in this year’s elections in West Bengal.

Left leaders in Kolkata are unanimous in their opinion that the TMC would not talk much about the building; there is a joke in the city that Chief Minister Mamata Banerjee does not like the red colour in any form: in buildings, cars, flags, slogans or festoons.

Writing on the wall

Marxists leaders in Kolkata say that insinuating that a significant chunk of Kolkata’s historical buildings is at risk sends an unintended, and painful message that the problem is too vast, too impossible to solve.

“Is anyone talking about the Writers’ Building, I have not heard anything. Such has been the neglect that people have stopped thinking about this historical building,” former Kolkata mayor and Left Front leader Bikash Ranjan Bhattacharya said.

Bhattacharya says he has heard rumours that astrologers have advised the chief minister to avoid Writers’ Building, citing vastu issues.

A section of the TMC leadership associates, however, share a different memory of the very same Writers’ Building: it was here that the cops - egged on by then Bengal CM Jyoti Basu - had manhandled Banerjee on July 21, 1993. Thirteen Congress workers had died after cops opened fire to contain a mammoth rally led by Banerjee. The Bharatiya Janata Party (BJP) had also said it would operate from the iconic building if the party comes to power in the state. It did not go down well with the TMC top brass. However, the BJP's dream of sweeping Bengal polls did not pan out, as the party failed to cross 80 seats in the recent assembly elections. So, the general impression in the TMC ranks is that Banerjee would not keep the restoration of Writers’ Building on top of her mind.

The answer for Bengal's Marxists is clear. The Left leaders know some renovation will definitely happen. The ruling TMC has not totally neglected the Writers’ Building; some ministries of the West Bengal government still operate from the Victorian-era rooms. But what will be the eventual future of Writers’ Building, there are no definite answers.

“The Writers’ Building restoration or renovation is not the priority,” says Bhattacharya. He should know. The state government’s headquarters is the iconic Nabanna building that is also the home of the state CM, top bureaucrats and the state secretariat that houses a large number of departments and thousands of employees.

The state government shifted to Nabanna - the building has three arms of the second Hooghly bridge surrounding it - in 2013. One can view from Nabanna’s rooftop the magnificent Hooghly river, portions of the dockyard at Garden Reach, the expansive race course and the Maidan greency that is home to Victoria Memorial and a host of football clubs. Made by the Hooghly River Bridge Commissioners or HRBC, Kolkata, Nabanna is a 16-storey building at Shibpur, Howrah. (Photo: Biswarup Ganguly via Wikimedia Commons 3.0)

But for many in Kolkata, the Writers’ Building cannot be easily passed over; the building was home to significant political memories, stretching from the country’s Independence struggle to Bengal’s political powerplay.

The building was designed by Thomas Lyon and constructed on behalf of Richard Barwell, a council member during Warren Hastings' tenure as governor general. It was privately owned, but the East India Company bought the building for its junior employees three years before the 1857 War of Independence. Around 1906, the building acquired its characteristic Greco-Roman look. The workers added a portico in the central bay, coloured the exposed brick with red paint. 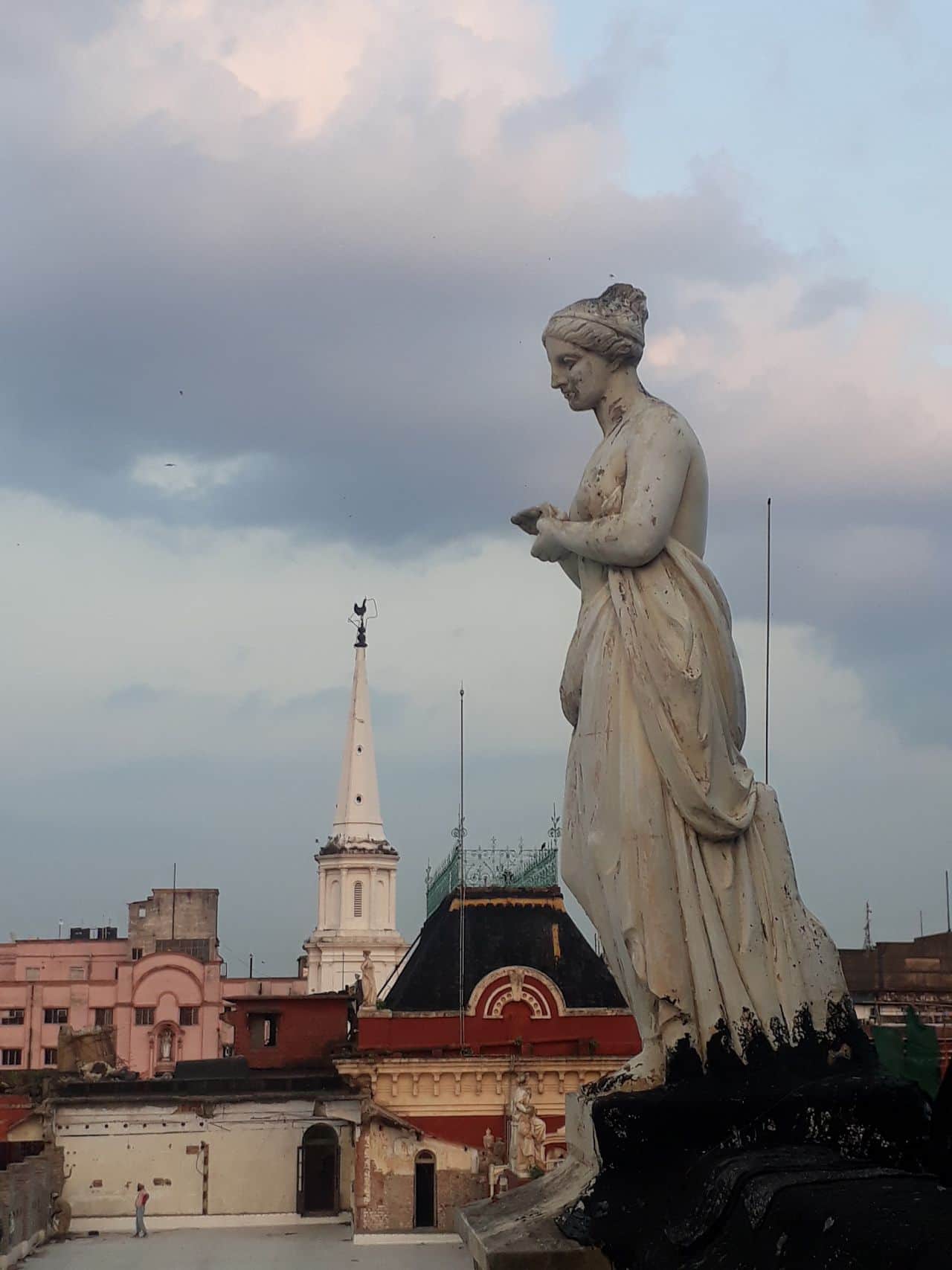 Statues on the rooftop of Writers' Building in Kolkata. (Photo: Pinakpani via Wikimedia Commons 4.0)

Some years ago, the state government consulted an Australian heritage expert for a landmark renovation of the Writers’ Building.

Roger Beeston, deputy chair, AusHeritage (Australia's international network for cultural heritage), was quoted as saying: “What struck me on seeing it the first time was the red paint. There are four key phases in the building's evolution. The most recent phase, the Victorian phase (1837 to 1901) was meant to be red brick.” That was in 2014.

"Another suggestion would be putting slate back on the Mansard roofs, the four-sided sloping French roofs. All slate has been lost and we have quite ugly asphalt and bituminous layers," Beeston had said.

Beeston had also recommended that the colourful and patterned Minton floor tiles of the Victorian period should be preserved, and all modern conveniences added to make the entire area energy-efficient and sustainable. The idea, Beeston had suggested, should be to engage the public through the building’s architectural splendour.

This is not an ordinary building that can be turned into a museum. Or turned into anything else. Some serious introspection is needed.
- Politician Rabin Deb

The task is huge. The restoration team would have a real challenge in restoring the building’s natural brick of the Victorian era. Why? Over the years, layers and layers of paint and cement have been rendered over these red bricks.

When the restoration plans were conceived by CM Mamata Banerjee, the idea was named "London Dreams", sprucing up Kolkata on the lines of the British capital. Among those shaping the restoration were members from Indian National Trust for Art and Cultural Heritage (INTACH) and Jadavpur University's Department of Architecture. The idea was to make the building look interesting to the masses.

The Jadavpur University's Department of Architecture had recommended demolishing post-Independence structures obstructing ventilation. INTACH said the restorers must ensure a landmark restoration that will turn the building into an organic, living space suited to modern times.

When the restoration idea was conceived in 2014, the plan was to make passive architectural interventions to ensure ample light and air. the rectangular Writers’ Building has a main linear block that includes the rotunda - once a popular space for media interaction for Left CMs like Jyoti Basu and Buddhadeb Bhattacharya - and five other heritage primary blocks. Then, an additional eight blocks were constructed - four before 1945 and four post-Independence.

But the proposed renovation did not happen. The restoration team had submitted a detailed report to the government in 2015 but actual restoration did not start. Madhumita Roy, who once headed Jadavpur University’s department of architecture and was leading the project, had no comments to offer. 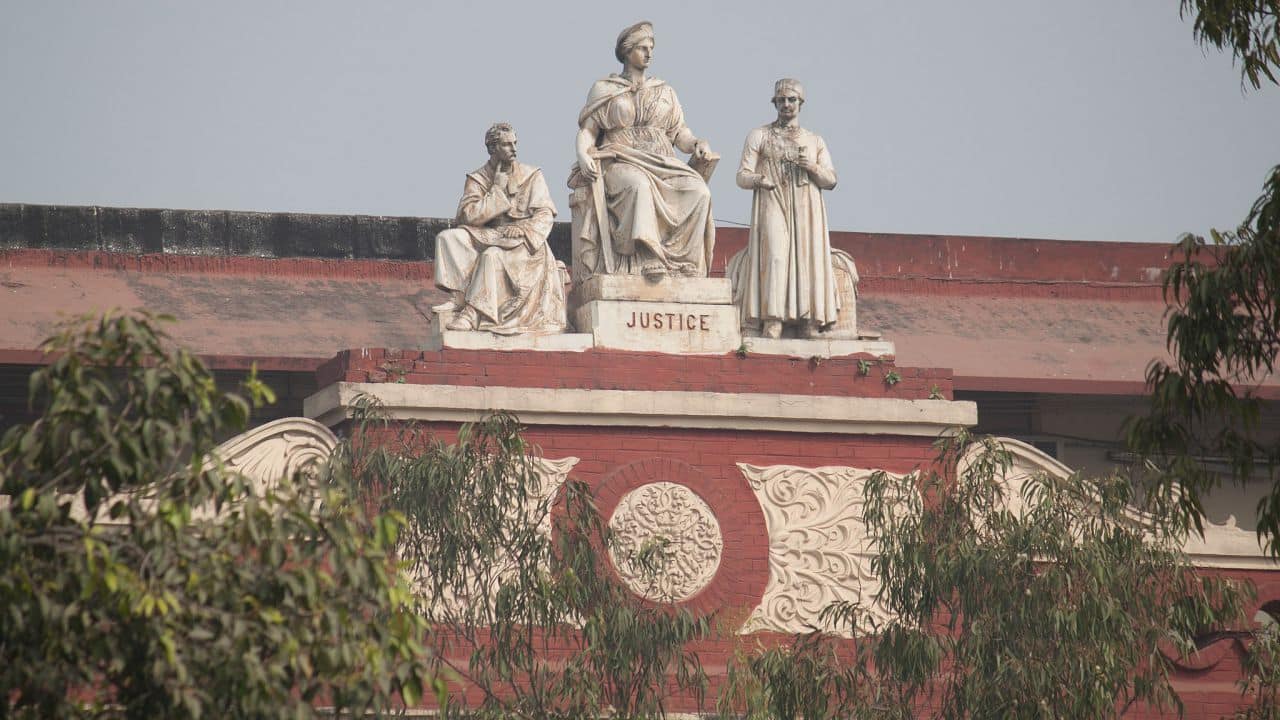 The building, says Kolkata-based filmmaker and thinker Ashesh Sengupta, has seeped in history, and has a deep connection with the East India Company, the British rulers and then the Marxist rulers. “You just can't wish away a building where history was written, written and rewritten.”

“But then, every time you talk about the Writers’ Building, a reference to the Marxist regime comes to your mind. In the current political context of Bengal, Nabanna starts and ends with Mamata Banerjee. So the Writers’ Building would certainly not be a priority for TMC.”

Another veteran writer, who spoke on conditions of anonymity, said the TMC decision to move away from Writers’ Building is purely personal, maybe a bit political. “Every political party wants to showcase some signature products like the centre of power. Change is good, it reflects the arrival of something new. The TMC victory over the Left Front was a landmark event, so it is obvious that the TMC would do things differently and create something (Nabanna) which would also acquire a space in the minds of people in Bengal.”

Old timers say the building was an integral part of the country’s Independence movement; and a British official was assassinated under its roof in 1930. Interestingly, the building retains its name, though the area around it has changed names thrice - from Tank Square to Dalhousie Square to BBD Bagh after the three revolutionaries - Benoy, Badal and Dinesh - who killed N.S. Simpson, the then IG of prisons - in the balconies of Writers’ Building.

“This is not an ordinary building that can be turned into a museum. Or turned into anything else. Some serious introspection is needed. The Writers’ building is a mirror to Kolkata. It is a place seeped into history. When you walk through the corridors of Writers’ building you can feel the change that has happened in the city,” says veteran Left leader Rabin Deb.

“It is a giant monumental barometer to society. It reflects a grand and powerful image and it stands its ground,” Deb said.

Everyone agrees. The real challenge to restore the Writers’ Building lies with the restoration team. Work must start; the TMC government is in its third term in West Bengal and a refurbished Writers’ Building - say Kolkata’s political pundits - will definitely give Didi’s image a tremendous boost.