UPCOMING EVENT:Special webinar on Highlights of global investing in 2021 and what lies ahead' at 2 pm on 21st January, 2022. Register Now!
you are here: HomeNewsTrendsFeatures

"The tyranny of the majority is not about demographics alone": Kaushik Roy

Visual thinkers would have no difficulty following the conceit in Alphabetica: A Satire on Majoritarianism - the first work of fiction by Kaushik Roy, president - brand strategy and marketing communication, Reliance Industries Ltd. For everyone else, Roy - who has four decades of experience in advertising and design - has illustrated the book.

At the risk of oversimplifying the story, Alphabetica is set on Planet Typewriter where each resident letter has their own quirks and characteristics. The conflict arises when a discontented letter, Y (Ypsi), questions the importance accorded to vowels - which are in the minority on this planet. Things come to a head, and threaten the precarious peace on this planet, till the ampersand plays peacemaker.

Alphabetica launched in Kolkata's Oxford Book Store on Friday, November 26. Ahead of the launch, Storyboard18's Shibani Gharat spoke with Roy about 'Alphabetica', its message of inclusivity, the illustrations and why Roy chose the pen name Roy Phoenix. Excerpts:

Tell us about 'Alphabetica' and the illustrations that humanise each letter; what is the relevance?

It’s a metaphor. It tells you that not a single letter can be dropped (from the alphabet). An effort can be made to say that ‘k’ can do the job of ‘q’, and that (argument) is there in the book, but q is q and you can’t say q is not required any more... remember that qwerty starts with a q. So therefore q has its place.

I thought this is such an important message that in 26 of these letter, they have their majority - consonants make a majority of 21 - and there are only five vowels. In this world where we are so obsessed with the might of the majority, what if the letters chose not to allow the vowels?

You cannot forget the fact that the letters we work with are from the Latin script which is from the Phoenician alphabet system which had only 22 consonants. So 22 consonants started the whole game and today there are five vowels. Historically, it was just the consonants. It’s an idea that tells you that 21 is not enough - you need the five to complete the alphabet. Then only you have words, otherwise there is silence.

Each letter has a personality in your book. Are these inspired by real people?

For example, there is somebody who is supposed to be a standup comedian. Now, for some reason, people don’t like standup comedians. From my time, the newspaper masthead image was either the breaking news or a cartoon. You don’t find cartoons any more. It’s not by some kind of design - it is the reality of the day: we don’t like humour. We don’t have the ability to take humour. In my story, there is one character who is meant to be the comedian and the comedian is not liked.

Then there is the scholar who knows everything that’s going wrong, but does not speak up. They have a lot of knowledge but don’t have the courage. 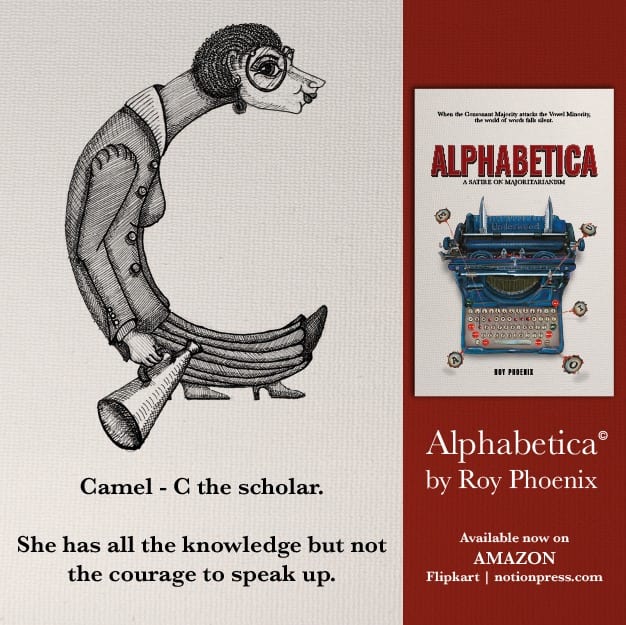 Then there are these people who are supposed to be learning things in a classroom, but there are some who fall asleep, so they are easily fooled and led astray.

I think these are very real people in terms of the types and stereotypes that you come across in society. And it’s all over the world, not just my country.

As a young kid I used to go to my father’s advertising agency, and I was fascinated by one thing: I knew ABCD were letters, but they (the creatives) would say this character is not working... Somewhere this character got into me; I started to believe that S and T, they sit together and they have a tremendous love affair going. Whenever I would come across a word that had S and T together, I would say oh, their chemistry is happening. I started to see the letters as having relationships and letters that don’t get along, and so on. Of course that was then. Now I’ve done it for a different purpose.

Tell us more about this purpose.

The tyranny of the majority is not about demographics alone. Of course, it is about the larger population telling the smaller population what it should be, but I think if you look at even your organization where you work, which is my take, you will find a group which is stronger, which is trying to control the smaller group, there is a politics of size.

My younger son is differently abled... the tyranny of the majority tells you what those people must do and not do, what they should think and not think. So the whole idea of the normal is defined by the majority, never by the minority. I, therefore, felt that the story is about the majorities always wanting things to happen their way.

Tell us about your nom de plume, Roy Phoenix.

There are two reasons (why I took this name). First, you might know about my advertising experience but for the larger universe, I needed to be an entity who is not confused with my advertising past… I think all (my) fictions will be under Roy Phoenix and all non-fictions will be (under the name) Kaushik Roy.

The second is, my father started an advertising agency in 1948 called Phoenix Advertising. I am the second generation, and my son is the third generation (promoter of the agency) - we have always been in advertising. As a child I was fascinated by the logo of this bird flying with a flame underneath it. So I asked: what does it mean? I was told that this is a mythical bird that lives for a thousand years and rises from its ashes. I thought it was fascinating.

So my father gave me the name Roy, and Phoenix is the name that I have to carry forward.

Are you working on a non-fiction book currently?

Yes, I have started working on it. I have to gather a lot of information, going back to 1980 - I want to start with Nazia Hassan’s Disco Deewane, which was the first major thing I worked on. That will be (by) Kaushik Roy. I am going to be talking about the brands which I think changed the whole category. I am fortunate to have worked on three mobile brands: starting from Maxx Touch (Hutchison) which has now changed names so many times and has now changed completely to something you can’t even recognise. Then came Reliance Mobile and then Jio.

There are quite a few illustrations in book; tell us about the reason and inspiration behind these.

When I started thinking about these characters, A-Z, I felt they have a certain look. So I started drawing these characters as I was writing, and then at some point I thought it (the illustrations) wasn’t going to work because there was this reaction that oh, it’s a children’s book. Because there is something about ABC and the alphabet, that the first thing you think is that it’s got to be for children. And I felt that if I add the illustrations, it may take it more towards a children’s book.

After completing everything, I felt there was another problem - which is a bigger challenge - which is that it is very easy for me to look at the inanimate (in the context of the book) and see that there is life in it. I could possible see them (letter characters) talking. But for the reader it’s not easy.

Who is the ideal reader of this book?

That is a million dollar question; I am actually looking for those people who turn around and say this book is for me. I believe that it is a pretty serious book. It has a problem of coming across as very lighthearted, and ABCD gives you a feeling that it could be for children, but it is not.

I think it is for the people who are a) concerned about the tyranny of the majority... in every sphere, not just politically; and b) for people who enjoy this kind of writing or the whole power of imagination, to take something which is very symbolic.
Shibani Gharat
Moneycontrol News
Tags: #Alphabetica #Author interview #books #English-language #Inclusivity #interview #Kaushik Roy #Majoritarianism #Roy Phoenix
first published: Nov 28, 2021 09:26 pm