Republic Day 2022 | The Indian Constitution is a work of art, its pages illustrated by the best artists of the time

The original Constitution of India is also the home to some iconic linear illustrations done by master artist Nandalal Bose, who was one of the pioneers of modern Indian art.

(from left) Nature is seen as mountains (Himalayan range), desert and ocean; a detailed portrait of Netaji Subhas Chandra Bose, done by Rammanohar Sinha, can be seen at the beginning of Part 19 (Miscellaneous) of the Indian Constitution.

In New Delhi’s Parliament Library there is a helium-filled case inside which two original copies of the Indian Constitution are hermetically sealed. Befitting an article of such historical significance, the 230-page book is handwritten in exquisite penmanship by Prem Behari Narain Raizad and illustrated mainly by Nandalal Bose, an iconic artist.

The depiction of India’s journey was curated by Bose, the chief artist of the project, who conceptualized and executed the landmark illustrations.

“Illustrations? I didn’t know there were any,” said a young harried lawyer during a recent conversation. In the frenzy of reading cases and writing briefs, illustrations were far from her mind. Keeping such young lawyers in mind, here’s a quick look at the illustrations in the Constitution.

The Constitution of India has a preamble and 470 articles which are grouped into 25 parts. The preamble has an ornamental border done by Beohar Rammanohar Sinha who signed his name simply as ‘Ram’ in Devanagari script on the bottom right of the page.

Sinha was the senior-most and favourite student of Bose and was part of the team that illustrated the Constitution. In order to do the illustrations for the preamble, Sinha visited Ajanta, Ellora, Bagh, Badami, Sanchi, Sarnath and Mahabalipuram for research.

It is said that he had to be cajoled to sign his name and in spite of having done other illustrations in the Constitution, Sinha would only sign on the preamble.

Then come the illustrations on the first page of each section. They are mostly rendered in gold and the borders are reminiscent of the traditional Indian manuscripts with early Persian designs also included. Rajasthani artist Kripal Singh Shekawat, aka the father of blue pottery, did several border illustrations.

A border of Mohenjo-Daro seals and a Harappan bull at the header adorns Part 1 (States and Union Territories). A detailed ascetic gurukula is the header of Part 2 (Citizenship). Part 3 (Fundamental Rights) has a scene from the Ramayana. Krishna and Arjuna from the Bhagwad Gita are on the header of Part 4 (Directive Principles of State Policies). Scenes from the lives of Buddha and Mahaveer, the moment when Emperor Ashoka renunciates and becomes a Buddhist, scenes from the time of Gupta period and King Vikramaditya and visuals of life at the famed Nalanda University are all represented. As an ode to the artistry of Indian artisans, there are also depictions of sculptures from Odisha and Mamallapuram.

Being a master artist, Bose made several portraits, including those of Akbar, Shivaji, Guru Govind Singh, Tipu Sultan, and Rani Laxmi Bai. Mahatma Gandhi features in two sections with depictions of his Dandi march as well as his visit to the riot affected Naokhali where both Hindus and Muslims have assembled to see him. Sinha did a rather detailed portrait of Netaji Subhas Chandra Bose as seen in Part 19 (Miscellaneous). Nature is seen as mountains (Himalayan range), desert and ocean. Part 3 of the Indian Constitution (Fundamental Rights) has a scene from the Ramayana.

The artist or master moshai

Looking at the fact that in 1938, Mahatma Gandhi had commissioned Bose to decorate the pandal for the Haripura Congress session, it seems quite plausible that the artist would be chosen again for this prestigious project.

“Nandalal Bose was the principal of Kala Bhavana in Shantiniketan which was visited by leaders like Gandhi, Nehru and Subhash Chandra Bose,” said Jyotirmoy Bhattacharya, an art curator based in Kolkata. “He was a very important artist of the period and a popular teacher. Most of the artists then were taught the Western style of art at art schools but Nandalal and Abanindranath Tagore were shaping the Bengal School of Art which was rooted in Indianness. So that could be the reason why he was chosen.”

But the illustrations are illuminative of Bose’s idea of India. “The thought process of the master artist is clearly visible as the illustrations are the best examples of Indian historical periods,” Bhattacharya said. The narrative which comes from the content, however, is open to interpretations. For instance, the scene from Ramayana may be about a virtuous rule, the scene of Emperor Ashoka could be a victory of ahimsa over violence and so on.

Modern viewers may have issues with the imagery chosen, the personality-driven perspective of history as a way to drum up nationalistic pride and of course, the absence of women leaders excepting Rani Laxmibai. Many have used the illustrations to support their arguments in interpreting the Constitution. But in 1993, while giving a judgment on a case, the then Allahabad High Court judge, H.N. Tilhari, proclaimed that the illustrations "are the national and nationally recognized phrases and features of our national life, our heritage, our culture and the source of spiration, for adopting the concept of secularism". And that may just be the way Nandalal Bose wanted the illustrations to be viewed. 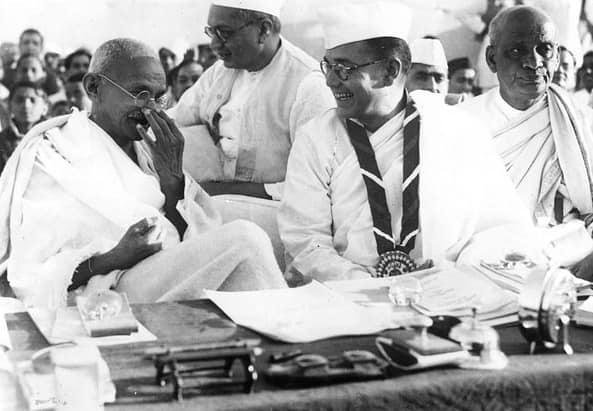