Mesmerising and touching tales from inside India’s isolated tribal communities

A new book on India’s six isolated tribes by Nidhi Dugar Kundalia gives us a fascinating glimpse into the lives of often ignored and unjustly treated communities of India.

When Sukri, one of the singing Halakkis of the Ankola tribe in Karnataka, finds out that her father has chosen a boy for her, she is concerned about her future. All she wants is to go to school and use paper, pen and inkpot to write long verses. But she gets married, and after that, all that life offers her is a void and a relentless struggle to find happiness. Her dreams silently dissipate too. She sings her grief away but at no point does she display loss of strength. 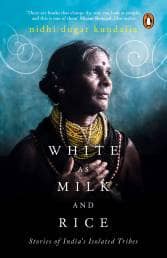 Other such anecdotes and stories dot Nidhi Dugar Kundalia's new book White as Milk and Rice, a compelling chronicle of six tribal communities of India – the Halakkis of Ankola, the Kanjars of Chambal, the Kurumbas of the Nilgiris, the Marias of Bastar, the Khasis of Shillong and the Konyaks of Nagaland – with each chapter dedicated to one tribe.

At the outset, the author shares her resolve to know more about these isolated tribes and how their lives have unfolded post-Independence. Each chapter paints several thought-provoking human portraits and tunes the reader to the vulnerabilities of its characters.

Written in a journalistic format with detailed and expansive narration sprinkled with an overlay of poetic language, the book is both enjoyable and educative. Expressions have been carefully chosen and woven into sentences. You read, and they fill you up, occasionally welling up your eyes too. In the background, the author draws a powerful landscape that places you right in the middle of their lives like an eyewitness.

Take, for instance, these lines from the chapters on the Marias of Bastar: “It is at night that the tree blossoms and at daybreak, each short-lived flower falls to the ground. It is not yet dawn, but the shadows have already lengthened by the time Birsu is in the forest.”

Or these ones from the chapter on the Kurumbas of the Nilgiris: “Each spring, as the wind dies down, and clusters of jacaranda flowers bloom on the trees, Kurumbas sense the spring in the air and start following the bees in the forest as they collect sap from the flower.”

While it can be safely assumed that the concept of a tribe, or a traditional community, may have evolved over generations, Nidhi's writing with its poignant insights, satisfying subplots, and well-researched anthropological perspectives does not take the reader away from a universal fact: These isolated tribes have spent their whole lives fighting for basics. Identity has been a matter of survival for them. These tribal folks have raised humans, the ones who were warriors for their culture and heritage. The ones who believed that their existence is because of their tribe and so it needs to be well protected from any erosion.

One of the strengths in Nidhi’s writing is the way she has woven the most fascinating facts into the narrative. For instance, did you know that the British first came into contact with the Nagas in 1832 and marched across the hills with their 700 soldiers and 800 coolies? When the Nagas attacked the British, it flared into a war that continued till 1880 but they remained undefeated and finally the British had to give up.

Tribes like the Khasis of Shillong, despite being dispersed and isolated, were propounders of matriarchy. In an old-fashioned Khasi family, male babies were welcomed but the birth of a girl called for a feast. The Khasis followed the matrilineal principle of descent, residence and inheritance.

Indeed, all through the book, India’s tribal women have been crowned as caretakers, nurturers of the family but in the same breath, they have been shown to have terrific resilience and courage as well.

Mesmerising from page one, this non-traditional and fascinating account of India’s six isolated tribes manages to do a thoughtful examination of their lives, how they have largely remained in a bubble of wilderness, some out of choice, and some out of fear.

It also looks at they lost their life to the indifference and ridicule at the hands of the government and fellow citizens, and how those who remained still carry hope in their hearts and aspire to fight for better prospects while leading a marginalized life. Nothing is known of their language, yet they have a rich history, a civilization that deserves to reach every human who has dominated over their land in the name of development.

Lead image: The Marias of Bastar photographed by Tania Chatterjee, founder and CEO of Fotorbit