With officegoers working from home during the pandemic, Bengaluru's delivery workers have been powering Yulu app's electric bikes business.

Yulu estimates that 17,000 gig workers have used their electric cycles in 2021. The company even designed an electric vehicle with a goods carrier that can carry about 10 kg load.

If he weren’t working for Swiggy in Bengaluru, Shantanu would have been with his family in Kharagpur, West Bengal. He works about 12 hours a day, crisscrossing East Bengaluru to deliver food to its residents mostly living in large apartment blocks. He gets exhausted but is grateful for the new job that’s only six months old. Shantanu told me his story when I met him in Whitefield. He was standing in front of a darshini at 7 am, waiting for his order that had to be delivered to an apartment a kilometre away.

“I came here three years back to work as a security guard,” Shantanu said, “but the salary (Rs 6,000) was not enough to support my family.” Struggling to make ends meet, he asked friends who were working as delivery boys for food delivery aggregators. They were making more money but all of them had their own two-wheelers. He, however, couldn’t afford to buy even a second-hand scooter. In August, last year, one of Shantanu’s roommates suggested that he try out the Yulu app. Through the app, he rented out an electric bike for a day after he had registered on Swiggy. “It was convenient. Since then, the cycle is my lifeline,” he said.

Yulu co-founders, including its CEO Amit Gupta, had visualized their MMVs to “decongest the infamous Bengaluru traffic and improve its air quality” when they started the company in 2018; their intention was to change the mindset of the white-collar commuters who wouldn’t leave their cars for cycles. The first stand of rental bikes appeared in Bellandur, a neighbourhood with several special economic zones housing MNCs. The electric cycles were aimed at the professionals living in the vicinity. 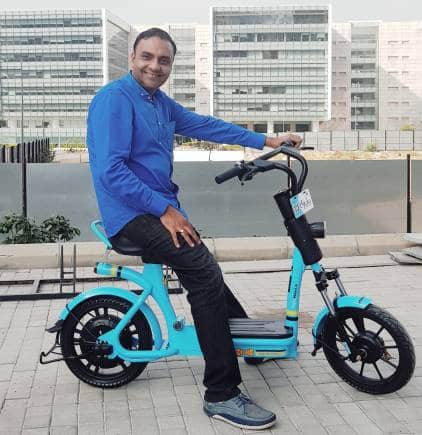 Then the pandemic hit and things changed. The work from home model meant white-collar professionals didn’t have to commute to work. “When the pandemic hit, we were asked to shut down,” Gupta recalled.  But there came a silver lining. The demand for hyperlocal deliveries rose and unemployed gig workers found jobs as delivery workers. For them, especially migrant workers from other states, these jobs posed two challenges – owning a two-wheeler and having a driver’s licence. Yulu’s electric cycles removed both the obstacles.

Sanjay Kumar, a gig worker from Bihar, said that he didn’t have a driver’s licence because his old job as a security guard in a factory didn’t require it. Access to a rental electric cycle opened up a world of opportunities for him. His story is practically the same as Shantanu’s. Indeed, Sanjay has worked for a logistics company, a food aggregator and a local medical store – all within two years. “I change my job whenever I get better options, all thanks to the electric cycle,” he said.

Yulu estimates that 17,000 gig workers have used their electric cycles in 2021. The company even designed an electric vehicle with a goods carrier that can carry about 10 kg load. And ever since the pandemic, Gupta told me the company’s journey has widened from ‘moving people’ to ‘moving goods’ for the last mile. “Using Yulu is expected to reduce the operating costs of delivery executives by almost 35-40%, increasing their earning potential.”

Steadily, several neighbourhoods in the city are seeing more delivery workers zipping around on electric cycles. Gupta reminisced about his father who had a crockery business. “Whenever we used to go out to a restaurant, my father would inspect the crockery closely to see if they were using his products.” Today, whenever a delivery worker comes to his house, he checks their ride. He laughs at the thought. “Friends and neighbours keep telling me whenever they see a gig worker on a Yulu cycle.”

If nothing, the cycles have armed the gig workers with dreams to earn more money. For instance, Sanjay earns about Rs 20,000 – 22,000 per month. He spends Rs 6,000 for cycle rental; he feels he might have spent the same (or more) if he had had a scooter but he would have had to shell out some amount for its maintenance.

But there are hitches along the way, like batteries that die sooner than later and having to look for charging stations – which Gupta said have been addressed. Sanjay talks of one night when he nearly got mugged. “At 11.30 pm I was on my way to deliver food when four men stopped me and tried to take my mobile phone and food. Luckily, there was a policeman nearby and he helped me out.” According to him, since the electric cycle is slower - 25 km/hr – than a scooter or a motorbike, it was easy for the muggers to stop him. “I am thinking of saving some money to buy a two-wheeler eventually,” he said. “But that is still a long-term plan.”

As of now, he, Shantanu and several gig workers like him, have been able to earn more thanks to the electric cycles. Looking at the blue cycles, all of them at a height which, Gupta told me, was designed keeping in mind the average height of an Indian woman (5’), it seems like the mindset for commuting is slowly changing. One gig worker at a time.