Amazon India recently hosted Smbhav – the first of a kind mega-summit for micro, small and medium enterprises (MSMEs) and traders. The event brought together thousands of MSMEs from across India as well as stalwarts from the Indian business fraternity and senior leaders from Amazon. The focus of the summit was to discuss and bring forward topics related to the future of Indian SMBs and their journey towards the Digital economy. The highlight of the event was a fireside chat featuring Jeff Bezos, Founder and CEO of Amazon and Amit Agarwal, Senior Vice President and Country Head of Amazon India. Bezos was effusive in his praise for India’s entrepreneurs, calling them hardworking and resourceful. On the previous day, Bezos had gone and paid tribute to Mahatma Gandhi at Raj Ghat and even participated in Makar Sankranti festivities. “I flew kites yesterday with a bunch of kids!” he exclaimed.

Bezos spoke about Amazon’s initial days, saying, “It's hard to remember, but 25 years ago, Amazon was a tiny little company. And you know, not only was I driving the packages to the post office myself, but I was wrapping them and, and preparing them and, you know, doing all the things that small entrepreneurs do.”

Answering Amit’s question on why Amazon is the best place to experiment and fail at, Bezos said, “See if you know in advance that something is going to work, then it is not an experiment. So, you want to be doing many experiments per unit time, as many experiments per day, per week, per month, per year as you can because that's how you get innovation. Innovation is all about maximizing the rate of experimentation. And so you have to organize to be able to experiment and you have to have a culture that supports failure. Amit and I together, we've been working together for two decades and I have failed together so many times and that is that is, it's another way of learning.”

Bezos then made a series of announcements. He said, “We’re committed to being a long-term partner of India. And actions speak louder than words. Over the next five years, Amazon will invest an incremental US$ 1 billion to digitize 10 million MSMEs across India, helping them reach more customers than ever before. This initiative will use Amazon’s global footprint to create US$10 billion in India exports by 2025 and will help create 1 million new jobs in the next five years. We will also establish 100 Digital Haats in cities and villages throughout India.”

Bezos also spoke at length about his passion for space travel and his work with Blue Origin. He explained, “We have to take care of this planet, and if we want to continue to grow as a civilization, we need a dynamic, entrepreneurial civilization with space entrepreneurs that will use the resources in our solar system. Blue origin wants to reduce the cost of access to space by a large magnitude. And we need reusable rockets to do that.” 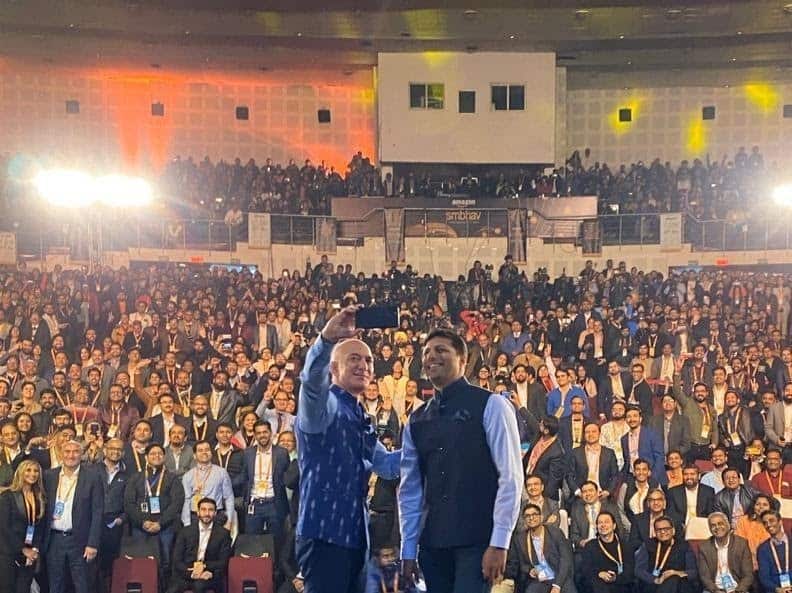 In his fireside chat, Mr. Biyani said, “The most memorable days for us were when we started. It became a journey of learning after doing something.” Recalling how Big Bazar was born, he said “We created multiple brands, then we thought we should have a family store. So we thought of a concept called Big Bazar.” Explaining how his company established a quick pan-Indian presence, Biyani said, “We decentralized on day one. We thought of the country in terms of four zones. We created multiple offices within each zone. That allowed us to grow.”

Mr, Narayana Murthy delivered a stirring keynote address where he talked about the Talking about the India’s vision of becoming a $5 trillion economy he said, “The responsibility of achieving this vision lies with the Indian SMBs.” He added that 85% of the country's business output came from the unorganized sector, 10% from SMBs, and 5% from large businesses, which made SMBs a very important part of India’s economy. He shared five points that he believed would help SMBs achieve success: “a differentiated business value proposition; attracting the best quality of people; a good balance of skills, expertise and experience; a durable value system that sustains growth; and ensuring that communities, and the country at large, become better.” 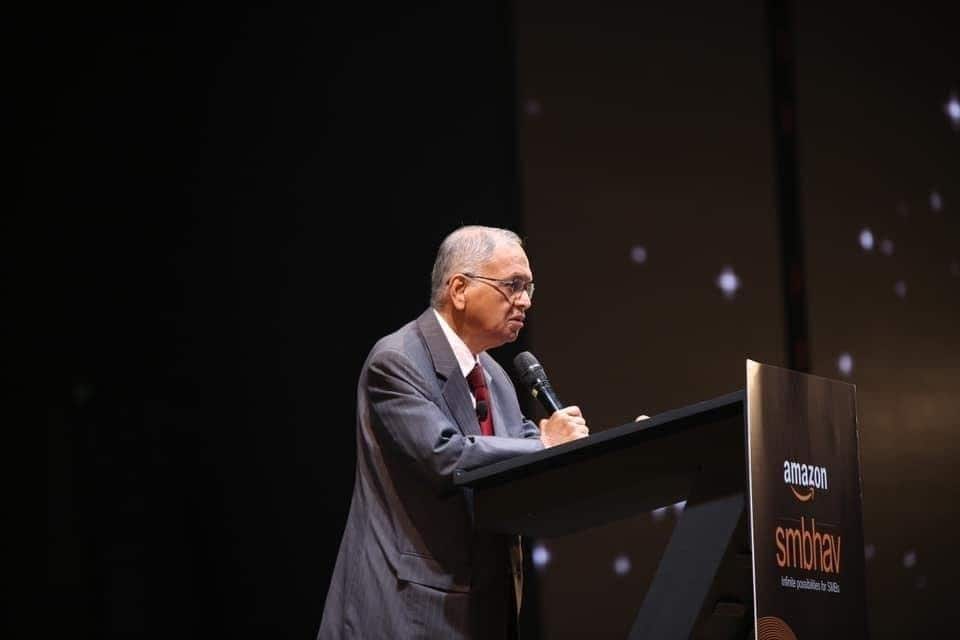 The keynote by Sonal Dabral, COO South Asia & Vice-Chairman (India) of Ogilvy explained how some of the big Indian brands today started off as humble SMBs. These companies have achieved billion-dollar net worth, he said, due to belief, commitment, identity, and effective communication.

Sudhir Sitapati, Executive Director of Foods & Refreshment with Hindustan Unilever and Vice President of Unilever, delivered the keynote on day two. He said, “It is easier to grow a category than to grow market share because it is easier to solve an unsolved problem than to solve a problem that someone has solved better.”

Ronaldo Mouchawar, Amazon’s VP for Consumer Retail Business in the Middle East, said, “Many of the sellers here are now able to list their products on Amazon in the Middle East. I met many young entrepreneurs here and was fascinated by how courageous they are.”

The two-day event also saw entertaining, and even enlightening, panel discussions on the various challenges that Indian SMBs face. The panels, which included the founders of many prominent MSMEs, discussed subjects like Physical Retail and eCommerce: Growing in Harmony, Growing Your Business With Bharat – Potential & Challenges, Is Cashless economy for SMBs a distant dream?, Blurring Geographical Boundaries for SMBs etc.

The masterclass series at Smbhav, named eDucate, also proved quite popular. eDucate had renowned industry experts sharing their insights into how India’s SMBs can tackle problems that crop up in areas like eCommerce logistics and empowering SMBs via technology to communication behind the scenes, accounting, and GST compliance.

What the SMBs said

Smbhav was attended by over 3000 SMBs, and if the excitement at the event was anything to go by, it could pave the way for a more unified SMB ecosystem in India.

Anuj Saxena of Knowledge Ridge, an SMB from Pune that collaborated on research for the event, said, “We would like SMBs in India to leverage technology and scale up their business.”

Utheja Rao of Bedeck Woods Pvt Ltd, who sells on Amazon India under the brand Deckup, said, “These two days have been very engaging, and listening to Jeff live was the icing on the cake. Riding on Amazon’s international presence and becoming a global company is a great strategy for sellers.”

Amazon also felicitated the 10 most impressive and innovative SMBs in India. Vahdam Teas was awarded Global SMB of The Year while hygiene product startup Pee Safe was named Best SMB Brand of The Year. Tanvi Johri of Carmesi was recognized as the Women Entrepreneur of The Year and Loom Solar was named the Fastest Growing SMB of The Year.

Smbhav hopes to kickstart a movement that could help define how India’s entrepreneurs expand and do business with the world. And this commitment to Indian SMBs comes from the very top. Jeff Bezos reiterated this when he said, “I predict that the 21st century is going to be the Indian century.”