Unmistakably Kashmiri, the pheran originated sometime in the 15th century. While still part of traditions like Verdan (bridal gifts) in Kashmir, the garment has also evolved with the times.

Tilla-embroidered pherans are a traditional gift that parents give to their daughters on their weddings. They constitute a part of the Verdan (parental wedding gifts). The embroidered pheran may be made of velvet (makhmal), wool, pashmina, terricot or rafal. (Photo by Irfan Amin Malik) 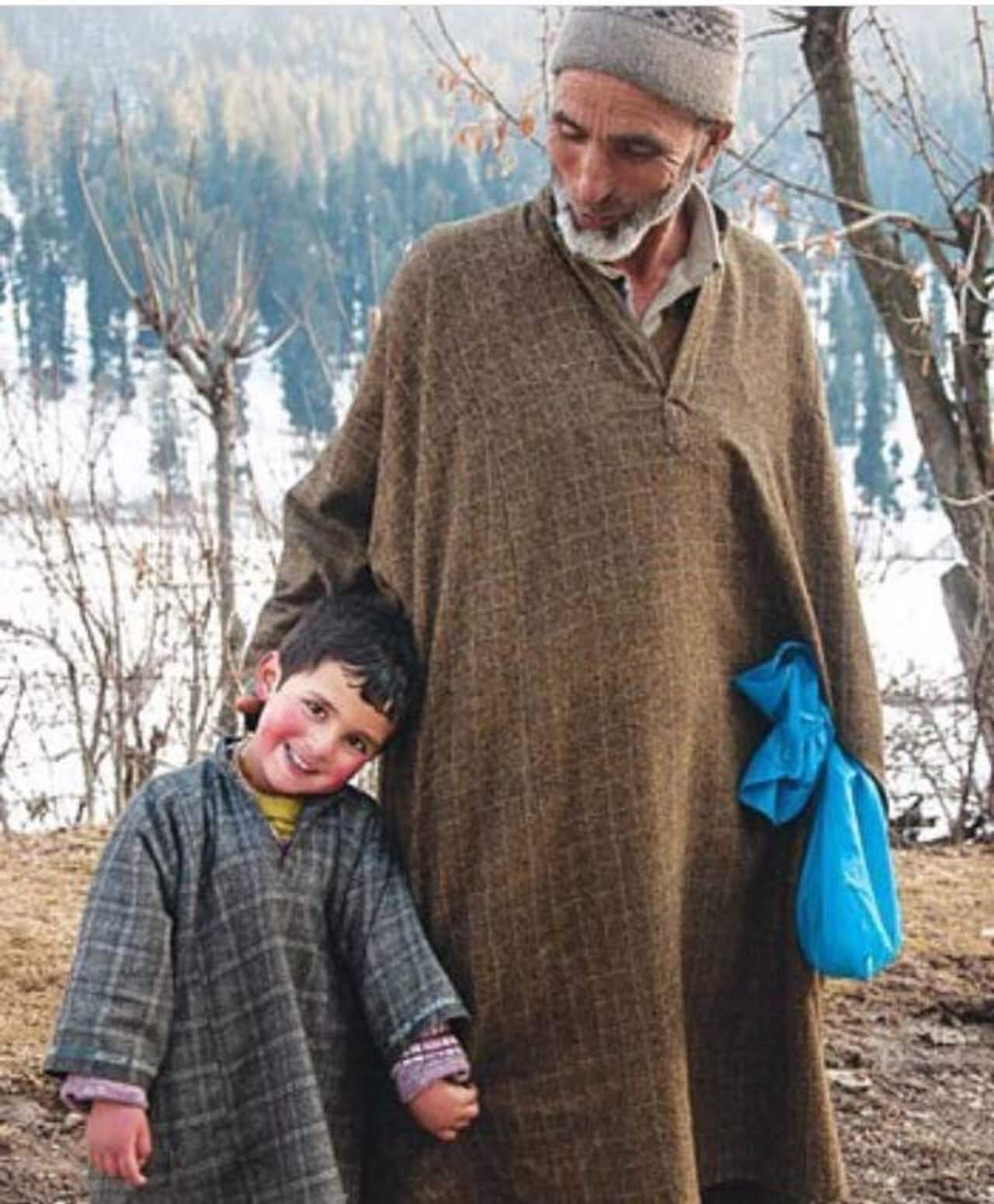 The pheran - a loose tunic that extends below the knees and is worn in the winter (locally known as Wande) - is unmistakably Kashmiri. Yet, it has become fashionable in other parts of India too. The appeal is obvious - the garment is warm without being cumbersome to wear, handle or clean. Typically embroidered using the tilla or arikaam technique, it is often also eye-catching. The long robe of the pheran is also spacious enough to cradle a toddler, with his or her head sticking out from the opening (Naal). (Photo: Dardic warrior via Wikimedia Commons 4.0) 1890 photo of Pahari women in Kashmir. The pheran dates back to around 15th century. Along side Koshur (the Kashmiri language), wazwan (famous Kashmiri cuisine), houseboats, Noon Chai (pink tea), and kangir or kangri (earthen pot; above left), the pheran too is considered an integral part of Kashmiri cultural identity. Despite tremendous change in culture and lifestyle, the Kashmiri pheran hasn't lost its resonance with or relevance to the people here. Dr Arshid Ahmad, an assistant professor of Kashmiri in Srinagar, said that it is believed that the pheran was brought to Kashmir during the reign of Mughal Emperor Akbar. However, he quickly added that there isn't enough historical evidence to say this conclusively. (Photo: Oriental and India Office Collection, British Library via Wikimedia Commons) 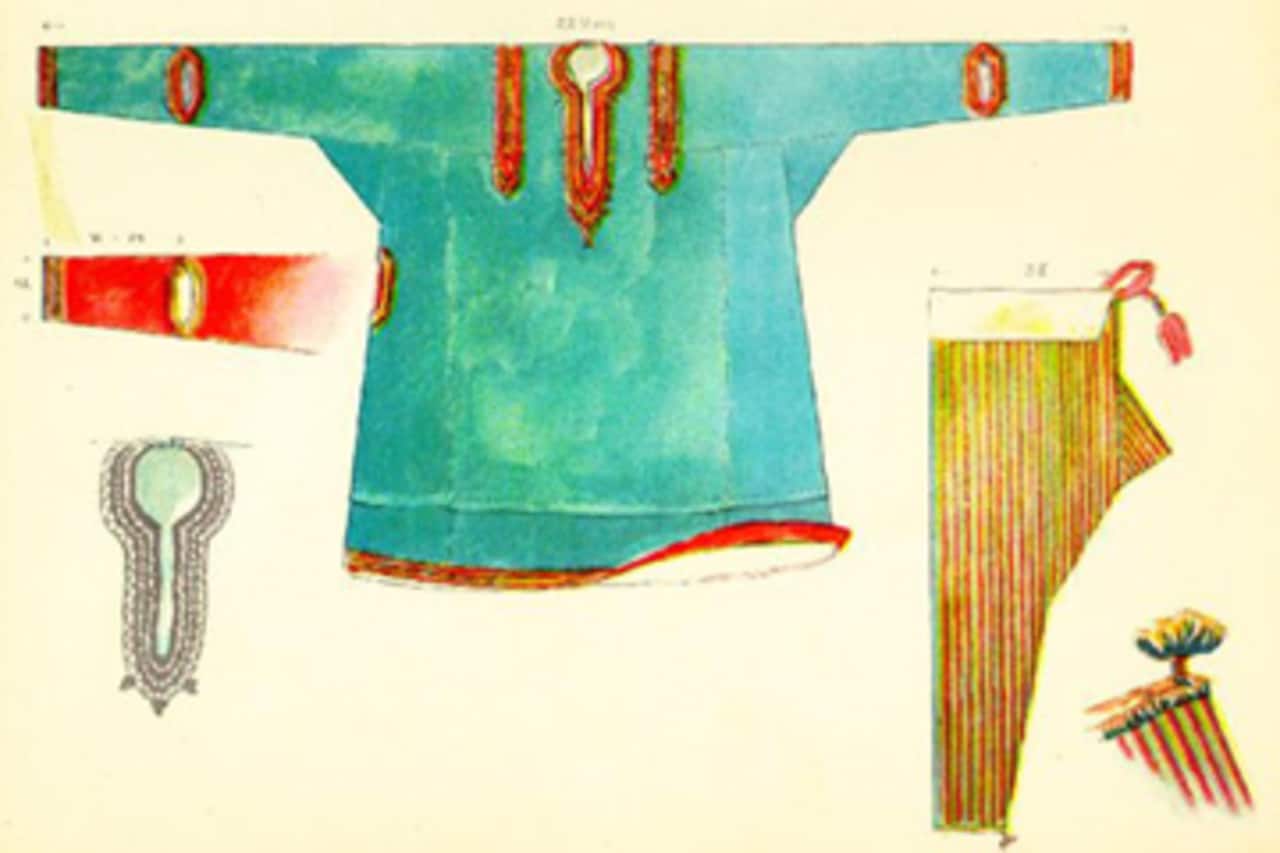 Though the etymology is a little ambiguous, some believe the name pheran comes from the Greek ‘apron’. Many argue that the tunic owes its origin to the Persian word for shirt,'Perahan’ or even the Tajik word ‘Peraband’. While some believe Mughal emperor Akbar introduced the pheran to Kashmir; others claim it was designed by Persian visitors to shield themselves from the biting cold. In his book 'The Valley of Kashmir', Walter R. Lawrence, the British settlement commissioner in Kashmir, wrote: “Some patriots go so far as to assert that the introduction of the kangir and its auxiliary, the gown, was an act of statecraft on the part of the emperor Akbar, who wished to tame the brave Kashmiri of the period.” (Photo: Tilke, Max Karl. “Oriental Costumes Their Designs and Colors.” via Wikimedia Commons) 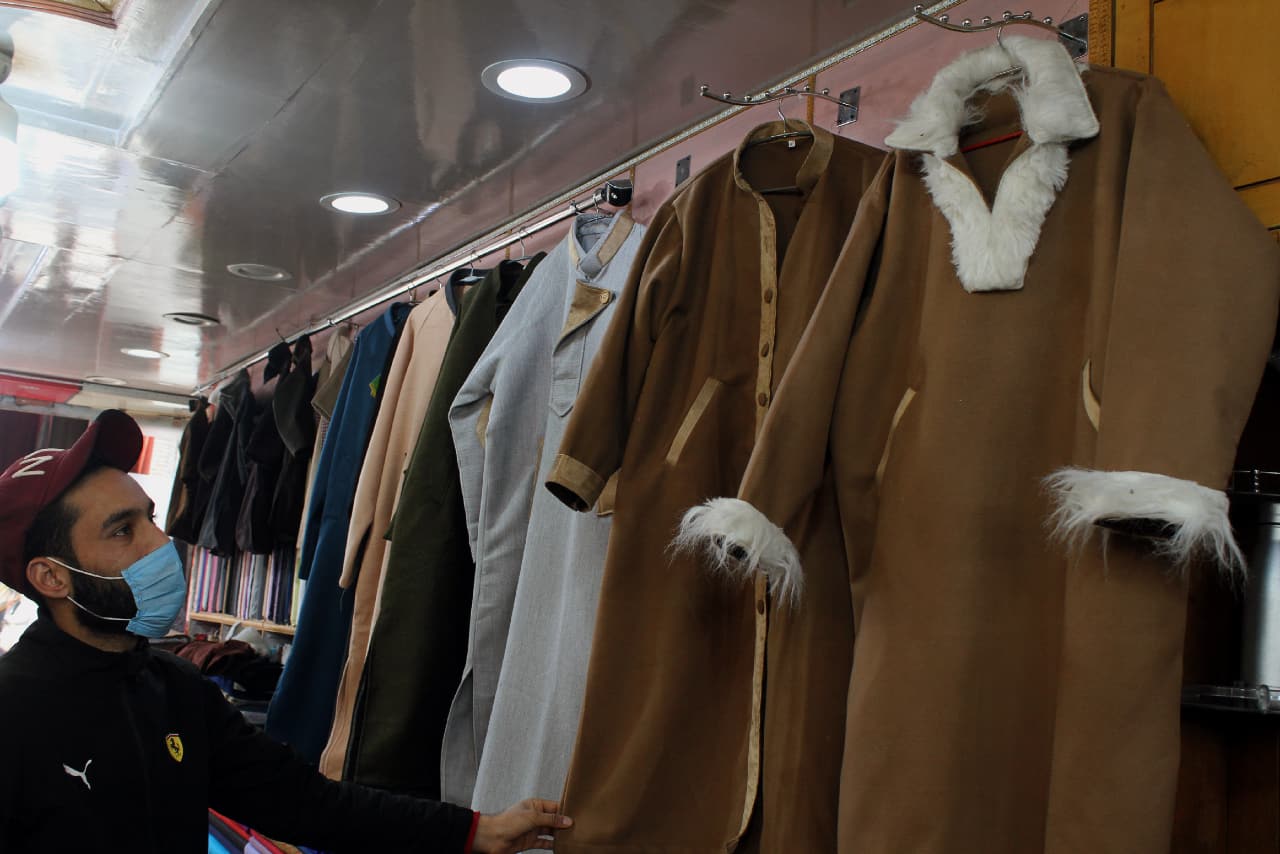 Every year around November, the demand for pherans rises. Pherans and kangris keep people warm, even when power cuts render heating appliances useless. Kangris are earthen pots heated with glowing charcoal and encased in handmade wicker baskets - people keep them in their laps, under their pherans, for warmth. Men typically wear plain long robes while women wear pherans with embroidered borders and neck. Over the years, tailors in the Valley have added style elements to pherans for men as well, by blending the traditional design with the English coat designs. (Photo: Irfan Amin Malik) Embroidery is done with Tilla, which is a silver or golden coated thread. The popular Quraab Pherans (pherans with slits at the elbow, to pin up the lower half of the sleeve to the shoulder) has a stamp of Kashmir on the bosom – a Chinar leaf embroidered in Tilla. With the passage of time, pheran embroidery also evolved. It used to be tilla work and arikaam with simpler designs at first. Gradually, Bihari tilla, glass work, thread work and mukhta work were added. Now pherans sport a range of Kashmiri embroidery styles, from sozni to aari and tilla, either hand or machine made. (Photo by Irfan Amin Malik) Ironically, not a single metre of wool and cotton for pherans is made in Kashmir. Everything down to the thread used for stitching is imported from Punjab, Delhi, Maharashtra and other states. A pheran requires at least two to three metres of thick wool fabric and the average cost is Rs 600 per metre. Most people usually have one pheran for winter, and this can last for years. To increase its longevity, a lining of soft thin cloth - either cotton or linen, called Poech - is typically worn inside the pheran. (Photo by Irfan Amin Malik) (Representational Image.) In recent decades, the pheran has come up in discussions around security as well. For example, security forces often frisk men in pherans, suspicious of what the loose garment may hide. In 2014, the Army had asked Kashmiri journalists to “avoid from wearing the pheran at events held by the Srinagar-based Army 1 Corps". Following an outcry by the local media, the Army subsequently revoked the order, terming the guidelines “inadvertent”. Even the Directorate of School Education, Kashmir, once banned the pheran at zonal offices in the Valley. In the Civil Secretariat Kashmir, the police had once put Pherans in the ‘banned items’ category.
In 2018 J&K government headed by Governor Satya Pal Malik, for a while banned the pheran at some of its offices. The order was heavily criticised, and eventually withdrawn. (Photo by Irfan Amin Malik) 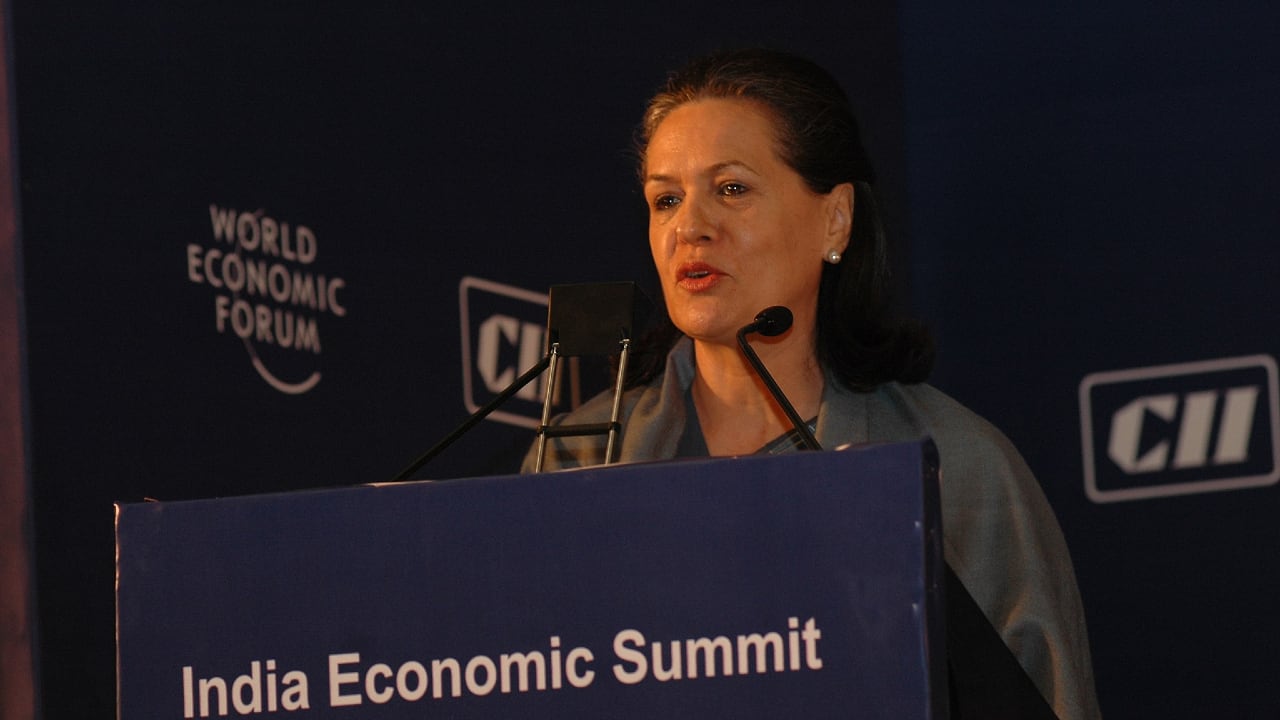 From time to time, politicians have worn the pherans to address people and hold official meetings. Indian prime ministers from Indira Gandhi and Rajiv Gandhi to Atal Bihari Vajpayee and Narendra Modi have worn the garment while addressing people of Kashmir. Sonia Gandhi as per reports was once gifted a pheran in New Delhi, she responded with a smile, “I have a wardrobe full of them.” In 2019, Pakistani Prime Minister Imran Khan also used the garment to send out a message on Kashmir. Former US First Lady Hillary Clinton, too, wore a pheran in India, when she was gifted one by a Kashmiri businessman in New Delhi. (Sonia Gandhi at the 'Meeting India's New Expectations' session of the World Economic Forum's India Economic Summit 2006 in New Delhi, 27 November 2006. Photo by Prabhas Roy via Wikimedia Commons) Modern renditions of the pheran combine new materials, cuts, and styling with older techniques and embroidery. Case in point: this handwoven cotton pheran kurta has khatamband cutwork at the back, and side mehraab pockets with folded sleeves. (Photo: Samiya Khan via Wikimedia Commons 4.0) 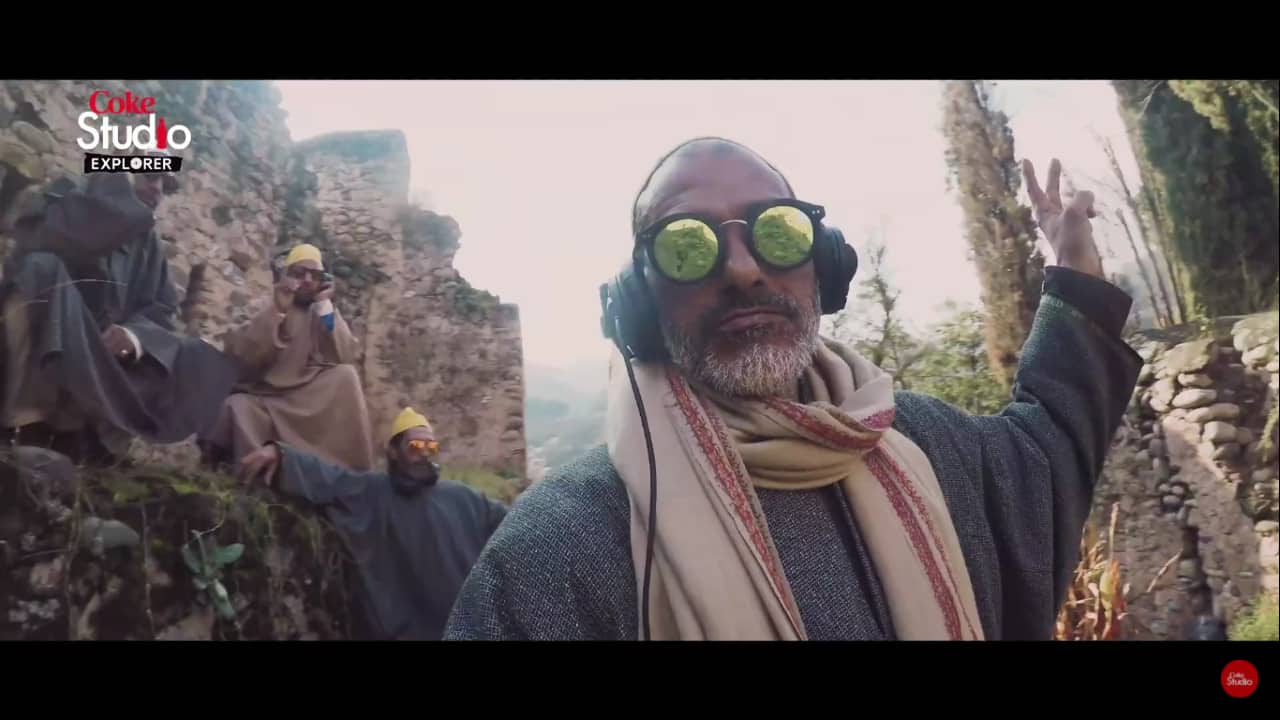 Altaf Mir in the Ha Gulo video for Coke Studio Explorer. Not only politicians but even Bollywood actors—Shammi Kapoor, Salman Khan, Ranbir Kapoor, Shahid Kapoor, Preity Zinta have worn the Kashmiri Pheran in different movies. Also, one of the highlights during the 2018 edition of Coke Studio Pakistan was the inclusion of a Kashmiri song Ha Gulo, sung by Muzaffarabad based artist Altaf Mir. In the video, viewed over 3 million times, Mir is wearing a typical Kashmiri Pheran and cap. (Image: screen grab)