The long-term sustainable practices of a women’s self-help group in the hills of Kumaon served to protect the area from the wrath of this year’s forest fires.

When the worst forest fires in two decades hit the north Indian state of Uttarakhand in April 2021, it was the loyalty and dedication of the women of Darmar, a small hill village in Almora district, that saved their trees from turning to ash.

The village women had cared for the land with complete devotion ever since the Pan Himalayan Grassroots Development Foundation had launched an eco-restoration plan in the hills of Kumaon, a part of Uttarakhand, more than a decade ago.

The project had initiated the planting of over 200,000 saplings, creation of check dams, and furthering education in traditional farming and water irrigation systems, including in Darmar.

For over 12 years, they had tended to its forest cover – maintaining irrigation, taming wild grass, and practising sustainable farming. From 2016 onwards, the women received a small subsidy of 5 kg of grain per month from the local authorities under the Pradhan Mantri Garib Kalyan Yojana, which motivated them to continue protecting the forests, besides their deeply entrenched affinity towards the earth.

But in the year of a rain-less pandemic, the lands were left barren and vulnerable to forest fires.

Even so, while the rest of the state battled 989 fire incidents between October 2020 and April 2021, destroying around 1,300 hectares of rich, biodiverse forests, the trees in Darmar village faced only minimal damage when the fires reached them in April.

The reason: The grass was cut earlier that month in preparation, leaving minimal fodder to burn up to uncontrollable heights.

But as much as honest efforts of the community checked the fire disaster, lack of government support meant that the villagers were left extinguishing flames with their bare hands. Health hazards mounted as dry soil was thrown in with no sizable extinguishers in sight.

The collateral loss of fodder, land fertility, and manpower went uncompensated at the later stage as social media covered helicopters making conspicuous efforts to control more visible incidents of fire around the state.

On being asked why no one came to their aid, Geeta, the gram pradhan (local body head) of Darmar laughs and exclaims, “Hum hi mahila toh karti hain sab. Aur kaun! (It’s just us women who do everything. Who else?)” Though the women had cut the grass and taken measures to check forest fires, they weren't able to prevent them altogether.

The women in the hills of Kumaon, Uttarakhand, are not only resilient and determined by nature, they have also developed strong community systems to challenge the odds they face. Remote mountainous areas lack employment opportunities, but are covered in farmlands galore.

While men often have to set out to bigger towns and cities in search of a stable income, women stay home in charge of nurturing produce, tending to the household, and bringing in the extra penny. Both genders here handle responsibilities with equal grit.

Further, the rise of women’s self-help groups (SHGs) has brought in a sense of equity. One of the umbrella groups is Mahila Umang Producers Company, formed in 2001 to enable the hill women of the Kumaon in building sustainable livelihoods for themselves through SHGs and production businesses.

Today, with approximately 200 SHGs in place and several women earning through daily-wage labour and retainer systems, the community of hill women has become a force to reckon with. Over the years, this collective has provided women with various channels to earn an income and promote saving. Above all, it has given them a sense of independence they now carry in their eyes.

“Jo karo usme ek sense of ownership honi chahiye (Whatever you do, you should have a sense of ownership in it).” One phone in hand, another on the ear, Sunita Kashyap talks about how working with Umang has been different than most standard nonprofit organisations, and how it has brought in a sense of equity.

The beauty about this system lies in stakeholdership. Each woman’s financial independence is her own responsibility. Work is handed out in accordance with the ratio of time a woman can devote to it. While knitting, jam-making, and other skills provide steady income channels, these local SHGs also keep the spirit of saving and prudence alive. 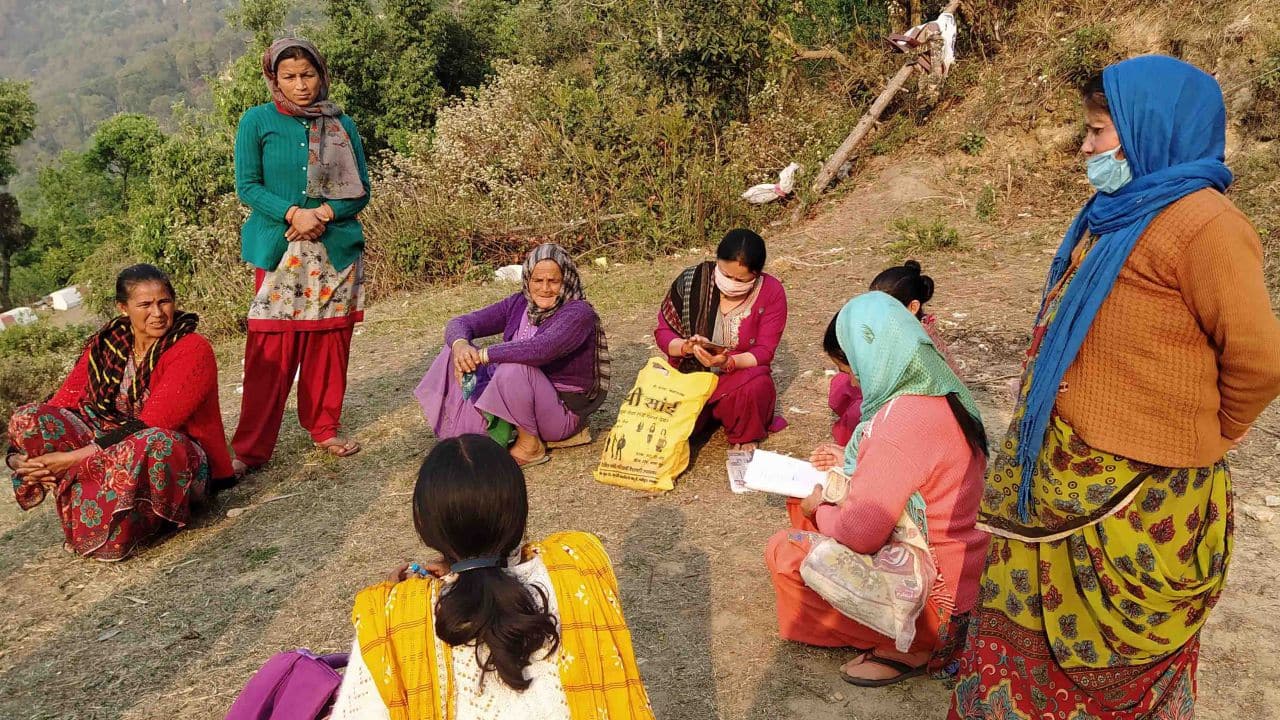 In Kumaon, the women formed self-help groups to build sustainable livelihoods for themselves. Their 'samuh' meets every month to collect savings and sanction loans to members who need them.

Every month, each SHG or samuh meets within itself and collects the monthly saving amount from each woman. Acting as a tether in an unpredictable life, this saving becomes a mandatory practice for the women no matter what else they cut back on during sluggish times.

This is important because, in times of need, it’s the samuh that comes to their aid. When there’s a wedding in the family or a new business requires seed capital, the samuh loans back the money a woman has saved all year round.

In addition, she is also allowed to lift the share of each woman who takes her payback guarantee. Suddenly, huge amounts don’t seem so huge.

The minimal rate of interest as compared to local banks is a major bonus. Generally, when families are unable to pay back bank loans, it instigates a debt cycle. But in the SHG system, there is a community of women standing behind you to support you through tough times.

This is not to say that operations aren’t riddled with complexities. As closely as the community is knit, the manifestation of stereotypical beliefs among group members often forces the need for an arbitrational figure to impose pragmatic functioning.

The pandemic-induced lockdown, for instance, saw bookkeepers lose touch with daily accounting due to lack of personal administrative checks and women members being penalised for their family’s shortcomings.

During the course of annual audit meetings, Sunita, who is a board member at Umang, would remain unfazed as a flurry of complaints and miscalculations would fly around among confused and frustrated women. 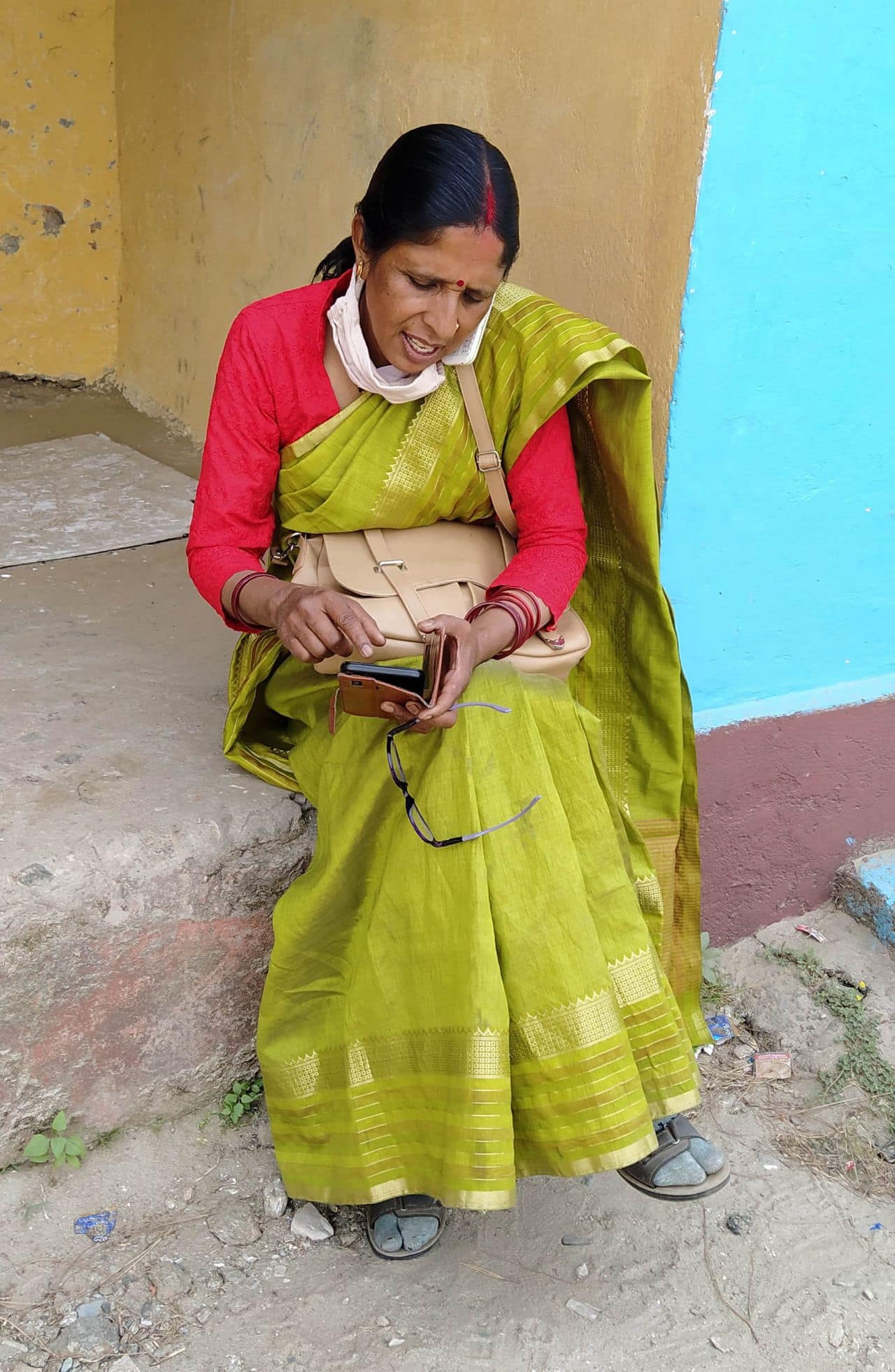 Sunita Kashyap is also a board member at Umang.

With the confidence she has found in the framework of the organisation, she would allay concerns, resolve issues, revisit guidelines and bookkeeping methods, and find a middle ground between operations and needs of those that the system affects.

In the village of Naini, also in the Almora district, Babita, the young daughter-in-law of a local leader, joined her local SHG this year though she was familiar with it for a long time. Still unsure of what the name of her group is, Babita says she’s here simply because, “chaar achhi baatein seekhne ko mil jaati hain (you get to learn a few good things)”.

She works as a teacher in a nearby school and has no time to gain income through the mediums offered at Umang. But she is eager to save up and learn a wiser way of living life.

For Janki, though, the role of the SHG is very different. In 2014 Janki became one of over 30 victims of an insurance scam that hit the homes of Naini. She, like the others, put her trust in a door-to-door caller assuring full-coverage family insurance at a fixed premium rate. Five years later, the man was nowhere to be found and Janki realised she had been cheated.

It is no wonder that the women of Kumaon found it hard to trust in novel income-generation or saving schemes. But the transparency at Umang convinced them. All savings accounts were opened in each group's own name; the bookkeepers were elected by the women, of the women, for the women; instantaneous loaning was undertaken in direct proportion to each woman's saving. Each transaction, even today, is meticulously recorded and annual audit sessions are undertaken by visiting each group and its members.

All data are now going digital with the changing times, yet auditors can be found personally tracking every detail in their own registers for double-checking any discrepancies.

Geeta Mehta, who is the leader of the SHG Jijabai and runs a tailoring centre set up by Umang, also tends to personal tracts of lands and grows fresh herbs and other crops with medicinal value. Finding buyers is tough in an area of low income, but Geeta generously shares remedies and herbal concoctions to those who come in need. Decades after the passing of her husband, Geeta has managed to put her son through engineering college and leads a training centre for women in and around her village.

Among low-income populations such as these, self-governed microfinance systems like that of Umang lend a supportive framework to these women. They help build a sense of solidarity and buy time and hope to look into new avenues of income generation.

What makes for a sound sleep at night – forest fires notwithstanding – is the potential to tether one’s life to a united community of likeminded women and a stable, improving quality of life. It is made possible only by looking beyond the economics and diving deep into the social frameworks and aspirations. 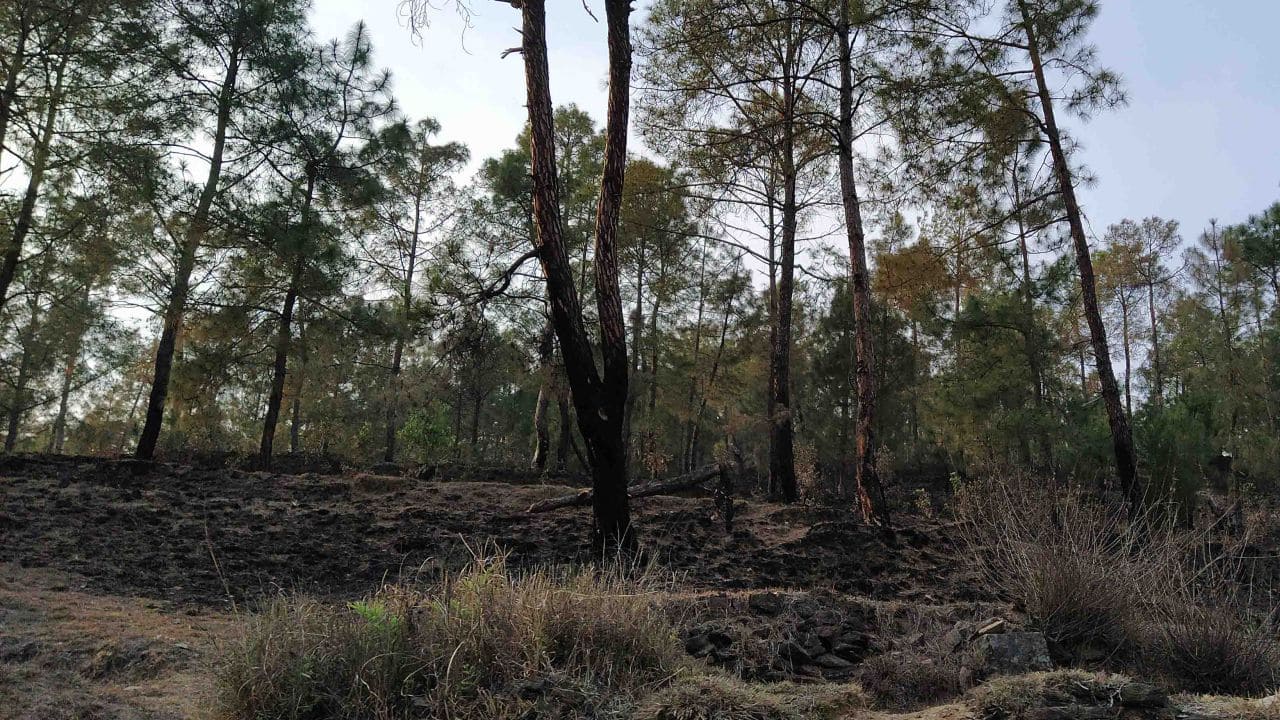