Finding Raza: The science of building an art collection

After Ajay Piramal had experimented with collecting a few works by multiple popular artists, he dove deep into S.H. Raza's work.

The Piramal Museum of Art recently kicked off an exhibition of 30 works by master artist S.H. Raza at Piramal Aranya in Byculla. The exhibit, which will be open to the public until February 28, features important works by the late Raza that range from the time he spent in Paris to the 'Bindu Series' and other unusual works by the master. The event in part was conducted to celebrate what would have been the late artist's 100th birthday.

Piramal Group Chairman Ajay Piramal, who founded the museum, talked about how he got started on collecting Raza, what he sees in the late artist, and why the art world has boomed in recent years. Edited excerpts:

Given that you have been into art for a while, how did you get started on collecting Raza's works specifically ?

My interest in Indian art is actually not that old, and some folks think it has been going for very long - maybe 17 years or so. I think I could always relate to modern art more than that which is too traditional. Of course, it is my belief that the art I collect has to be pleasing to my eye.

So we did collect a fair volume of works by all the masters and the progressives. At one stage Harvard University's Business School Dean Nitin Nohria was an adviser to me on art, but at a certain point, he also became a friend and like family. He did push me towards modern art because he had a collection and knew it well. In due course, I started to get bored because I had a very wide range of works by everyone, and in our discussions, he suggested I pursue a collection. One that was deep and not just wide, and not numbers but driven by quality and with each piece that had a story behind it as well as historical context.

Raza who had a diverse range of work, struck me as a good master to collect, and that's how my journey began. Then, around a decade ago, I decided to focus really deeply on Raza and decided that his story was most exciting to me and that I wanted to go try and collect all his important pieces wherever they may be.

What about Raza's work do you like in particular?

His work has a certain richness of colour as well as vibrancy of texture. The Bindu series are of course famous for their colours but even if you see a Bindu piece that is in black, it has so much vibrancy that I find it very compelling.

Some of his earlier work really comes out from his heart and soul. And if you see his explanations for the works, it really all adds up. If you look at the Surya Namaskar, it is actually a collection of many paintings that Raza had actually done - it has red Bindus and black Bindus and blue Bindus and triangles and it's almost as if he has taken 40 different paintings and compressed them into one piece. The point is, you can look at that one painting and sort of engage with it again and again and again. In some ways it's almost like a temple in that you will go and see something different in it each time. 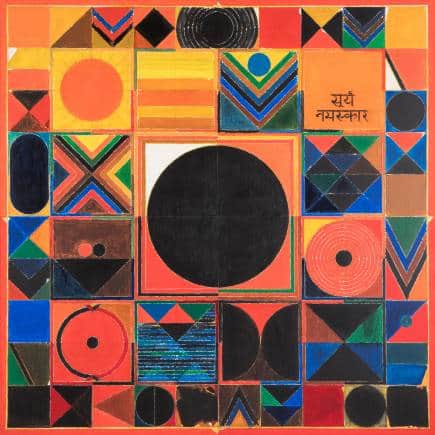 How large is your collection of works by Raza?

I can't remember exactly, but it's pretty extensive. The Pompidou Center in Paris wanted to do an exhibition, and we sent our list to the curator there and they wanted the whole set almost but went with around 30 works of the show which were a very substantial part of that exhibit.

The first work (in the series) Bindu ... is displayed here in Aranya. Then his first work which was influenced by works by Pablo Picasso and was done in 1949 and called Still Life with Guitar is also part of the collection. There's also the largest one Raza ever did called the Naad Bindu, which is approximately six feet by twenty feet and is absolutely black and radiates shades of grey but if you stare at it long enough, it radiates every colour.

Do you have a favourite work by him?

It keeps changing, really speaking. And honestly, if you look at his pieces from time to time, you see something different and I think he used to deploy hidden meanings in his art.

One of his 1960s' pieces, for example, called La Terre, the viewer can see figures emerge that sometimes could look like people, sometimes like an image of Lord Ganesha. That's the mastery of Raza, which is that while his works are actually abstract, they are created in such a way that the viewer can see very real and actual forms in the art. 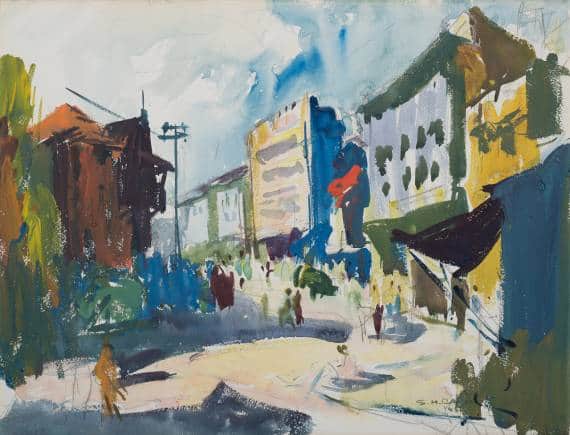 In his early career, Raza painted several scenes on the streets of Mumbai.

Raza passed away in 2016. But if he were alive, what would you have liked to ask him?

I would have really asked him for more of the stories behind each of his pieces. If an artist is commercial, he can paint works and go on and on. But his understanding of Indian culture was so deep, and even though he was not Hindu, his work was full of Sanskrit influences and deep Indian themes, so he was really broad-minded. When Partition happened, Raza's entire family left India but he stayed back yet he never disowned his own identity and embraced all paths and all views. The way he depicts sound in his art, for example, is very deep. That's what I would have liked to learn more about from him.

The last two years have been astronomical for art prices - what's driving that?

I don't understand, to be honest, but there is this fact which is that the wealthy have become wealthier especially those in technology with trillion-dollar valuations and what not. The stock markets have been on a high, bitcoin...etc., etc... and there's no logic to it sometimes but perhaps it's that this excess wealth finds its way to art. Of course, the other thing is that it's a way to make a statement of having arrived in life. Either way, the prices are crazy though.

We still see quite a delta between the prices of Indian art – even the big works by the big masters – compared to the prices of those in the West like say Picasso, which can run into the hundreds of millions of dollars. Why is that?

It's also how a subject and area of focus has been built up from the word go in the West. The collectors in India are also younger in terms of the trend catching on after the Maharajas passed on, and have been only seriously collecting for maybe the last three or four decades.

The other is that we learnt about Mona Lisa in school here in India but we didn't learn as much about Indian art, and unfortunately, as a country, we have not been taught as much about the Indian masters and I feel sad about that and I hope it will change in the future because we much have to celebrate and be proud of in terms of our own art, and its history. That's also one of the key focuses of the Piramal Museum of Art: to be educating audiences.