'Leaders, Politicians and Citizens' is a collection of short biographical sketches of 50 politicians and people in public life who have influenced the politics of post-Independence India.

Sandip Ghose
May 13, 2022 / 10:02 AM IST
Among the less known and forgotten stories in the book is one about the Sunday brunches that Rajiv and Sonia Gandhi used to host. Pictured here: Rajiv and Sonia Gandhi with Beatrix and Prince Claus in the Netherlands in 1985. (Image: Rob Croes/Anefo via Wikimedia Commons)

India has a tradition of oral history, but does not have a culture of recording it. Over the years, one has met people who are virtual repositories of anecdotes but few take the trouble of or have the talent for putting pen to paper. As a result, many lesser-known facts about individuals and events that shape the destiny of a nation are lost in the debris of time.

Rasheed Kidwai is as much a raconteur as he is a journalist. His latest work – Leaders, Politicians and Citizens – is a valuable addition to this missing genre in contemporary Indian political history. It is a collection of short biographical sketches of 50 politicians and people in public life who have influenced the politics of post-Independence India. 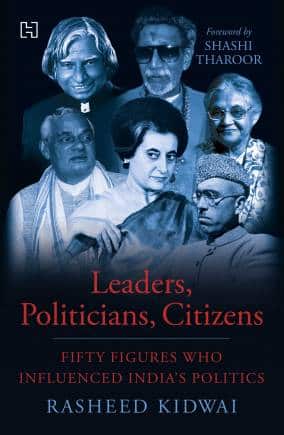 In writing, Kidwai has supplemented his own vast bank of knowledge –  accumulated over his long years as a political journalist – with research from published works of well-known historians, journalists and politicians turned authors. Through sharp brushstrokes, the pieces bring to life not just some forgotten personalities but also some untold backstories.

Arranged in alphabetical order of names, it starts with a touching piece on Sheikh Abdullah, recounting how his bromance (to use a modern phraseology) with Nehru soured and he died a disillusioned and bitter man discredited before his own people. Related to that is Nehru’s vacillation on the Kashmir plebiscite, Sardar Patel’s willingness to consider swapping Hyderabad for Kashmir (rejected by Pakistani negotiators as an unequal exchange of a province larger than Punjab for some “mountain rocks”).

Many of today’s generation would not know and even others would have forgotten Dev Anand’s brief tryst with politics. After the failure of the Janata Party experiment, he launched the National Party of India with luminaries like Vijaya Lakshmi Pandit and Nani Palkhivala, both of whom developed cold feet when it came to contesting elections. He wished to replicate the MGR magic in the rest of India. In the end, it turned out to be “a well-intentioned flop”. Similarly, Dilip Kumar and Vinod Khanna also find place in the memoirs.

As expected, Kidwai covers the life and times of noted actors of the great Indian political theatre that has been running for over 70 years and still playing to packed houses. In the case of the big stars - Indira Gandhi, Rajiv Gandhi, Atal Bihari Vajpayee – he reveals some entertaining vignettes that give readers a better understanding of their personalities. But the hidden gems are in the stories of some lost personalities. For examples, how many would still recall Namdeo Dhasal – the controversial, complex and contrarian founder of the Dalit Panther movement, or Abdul Jabbar – the lonely crusader for the victims of Bhopal Gas Tragedy, who died penniless in 2019.

Unlike other journalists on the capital beat, Kidwai does not leave out the regional stars. So he has chapters on Jyoti Basu, Jayalalitha, Tarun Gogoi, N.T. Rama Rao, Laldenga and Balasaheb Thackeray with interesting snippets and insights that makes them more accessible to a pan-Indian audience.

Then there are interesting cameo actors like Chandraswami, Phoolan Devi and Amar Singh who not only added colour to the scenes but also altered the scripts at times. Just as Indira Gandhi had her inner circle of confidantes (with the likes of Teji Bachchan - whom she lost trust in in her later years), Sonia and Rajiv Gandhi had their Sunday Brunch Club comprising Suman and Manjulika Dubey, Romi Chopra, Arun and Nina Singh, Satish and Sterre Sharma, Ottavio Quattrocchi and a few more. They were the movers and shakers of Lutyens Delhi in the 1980s. No compendium of such kind can be complete without the inclusion of the ‘power brokers’ through the ages. So, R.K. Dhawan, M.L. Fotedar, Ahmed Patel, Motilal Vohra, Sitaram Kesri have chapters devoted to them.

A common theme running through the characters is how they did not achieve their potential and died somewhat disillusioned. And whether it is coincidence or destiny that the careers of many were truncated after falling from grace of the members of the dynasty that ruled India for nearly six decades.

In some ways, the work is a tribute – a curtain call as it were – for the entire cast and crew who work behind the scenes.
Sandip Ghose
Tags: #Book Review #books #Indian political leaders #Indian Politics #Leaders Politicians and Citizens #Rasheed Kidwai
first published: May 13, 2022 09:54 am