Wear the sari, just be yourself: Advice that helped Indra Nooyi's crack a job interview

From her childhood in India in the 1960s to her meteoric rise in the corporate world in America, Indra Nooyi's new memoir covers a lot of ground.

Shortly after our winter break, the race was on to land a summer job. I needed a paycheck, and I was a good stu­dent. My professors were ready to give me great references. They viewed me as hardworking and easy to work with. They felt I had a unique global perspective on issues that was sorely needed in corporate America. Companies were com­ing to Yale, and I had to impress them. 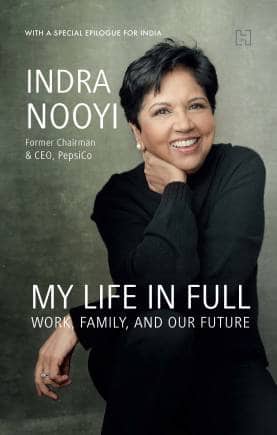 My only worry was that I had no business suit. I headed back to Kresge’s with fifty dollars, my entire savings at the time, and picked out a dark-blue polyester outfit—a two-button jacket and matching slacks. I added a turquoise poly­ester blouse with light-blue and dark-blue vertical stripes. I went to try these on but had never been in a fitting room before and was uncomfortable about undressing behind a drape lest someone peek in.

So I held the pieces up in front of the mirror. The slacks were OK; the jacket seemed a little oversized. But I remem­bered my mother’s advice to buy clothes a couple of sizes too big because I’d “grow into it.” I was twenty-four years old but, just then, forgot I was fully grown. I bought it all, proud of handling this big purchase, and I used all of my money. This was the single biggest expenditure in my life thus far.

Leaving Kresge’s, I noticed the shoe department, but I had nothing to spend on shoes. Never mind, I thought. My orange suede loafers with the chunky plastic base, which I’d been wearing all winter, would do fine. I could tuck my feet under the table. No one would notice.

On interview day, I put on the suit. The blouse fit nicely, but the slacks were a lot shorter than I had realized. The jacket hung awkwardly on me. But that’s what I had, and I was stuck. It was too late to exchange the clothes for differ­ent sizes. I headed to the SOM administration building where everyone was gathering in the career office to meet prospec­tive employers. There were my schoolmates, pristine in their well-fitted Brooks Brothers suits, the women with silk shirts and elegant wool skirts and blazers.

I heard a collective gasp. Everyone was looking at me. I pretended not to care.

I met that day with Insilco, a Connecticut-based con­glomerate that managed brands in prefabricated housing and office supplies, among other businesses. The interview went fine, but I left the room completely embarrassed and defeated.

I ran down the hall to the director of career development, Jane Morrison. I sat down on her sofa and burst into tears. “Look at me,” I said. “I went to the interview like this. Every­one is laughing at me.”

I told Jane about my financial predicament and how I bought a suit to fit my budget. “I wanted to fit in,” I ex­plained.

Then she asked me what I’d wear to an interview in In­dia. A sari, I told her. I had many of them back in my room. Her advice: “Next time, wear the sari. And if they won’t hire you for who you are, it’s their loss. Just be yourself.”

Insilco made two offers that evening. One was to me. It dawned on me that I was in a new environment—and that this might be a living example of the American promise of meritocracy. It was clear that Insilco picked me because of what I said and what I could contribute and looked past the horrendous outfit I wore. I had three weeks to accept the offer.

My next interview was scheduled with Booz Allen Ham­ilton, the consulting firm. Consulting was considered aspi­rational. The hours and travel were brutal, but the job paid well, and the conventional wisdom was that the experience offered a three‑to‑five-year head start versus a regular corpo­rate career. This meeting was too good to pass up, even with an offer in my pocket. I decided to carry on with it.

I wore my favorite turquoise silk sari with cream flowers and a turquoise blouse, and I met with a Booz Allen partner from Texas who put me at ease right away. He conducted a rigorous interview using a business case, and I felt he was judging my ability, not worrying one bit about what I wore or looked like.

Booz Allen hired me for a summer job in Chicago, with interns from Harvard, Stanford, Northwestern, and the University of Chicago. I joined a team developing strategy for an Indiana-based company that made food in­gredients, a wonderful group of men who included me in all discussions and deliberations, coached me, and fully supported me.

I wore a sari to work every day but never visited the cli­ent. Taking me to a client meeting in Indianapolis in a sari would have been too jarring in those days. At the time, I fully understood and accepted my colleagues’ leaving me behind. It seemed a small price to pay.

I was thrilled to be on my way as a working woman in America.