For the past many years, Indian-born Australian actor, model, and social-media influencer Saloni Chopra has been using her voice and visibility to create awareness about intersectional feminism and body positivity in often provocative ways. With over a million followers on social media platforms, the 29-year-old, who works in Hindi films and television, has just authored a book of short essays, titled Rescued by a Feminist.

In the 350-page book of essays, she voices her thoughts, opinions and experiences on gender equality, violence against women, the importance of inclusive language in creating socially just societies, and taking care of one’s mental health in the time of social media.

eShe spoke to Saloni about her views and the experience of writing her first book.

Did writing this book change you in any way?

It’s been quite a journey. So many anxiety and panic attacks later, I’d say it was one of the hardest, yet most important things I’ve done. I want enough young womxn to know that they are not alone, they are not at fault, and they are enough. It’s everything I wish I was told in my early 20s.

Since you’re already popular and vocal about your thoughts and opinions on Instagram, why did you decide to write a book on this subject?

I wanted to remind as many Indian womxn as I could to take up more space. Remind them that their dreams, their desires, their orgasms matter. They matter.

It’s a book of anecdotes and essays, little reminders to womxn to stand up for themselves, reassure them that we’ve all been here, we’ve all felt like we deserve more – this book, to me, is a love letter, a journal, a reminder, that you are enough.

You’ve mentioned you changed the word woman to womxn because you wanted to be more inclusive. Why do you think language and such nuances are so important when it comes to gender equality?

What we say, to whom we say, and how we identify with ourselves is a huge part of who we are and how we learn, evolve, collect, connect and exist. Language is often an identity and a place of comfort. It is highly influenced by the community of people using it. Language evolves with time, and hence it is such an important part of our growth.

To me, the word womxn helps me identify with myself. As a community, we don’t all have to pick just one, it’s not like there’s limited freedom to be distributed between us all. Instead, we can pick whatever works for us, and let others pick for themselves. Be a woman, be a womxn, be anything under the sun that makes you feel closer to home. And let others do the same.

Language needs to be inclusive, intersectional, and open for all.

You’ve shared very personal anecdotes from your life such as about abusive boyfriends or facing discrimination at the passport office. How did you reach the point to be able to look back at painful incidents with this kind of objectivity?

That’s where all the panic attacks happened. My partner Rahul really helped me through most of those days when I couldn’t breathe. He’d make me take walks and smell lavenders and breathe. I can’t really put into words how difficult it was to not only recall those memories and write them down, but then also rewrite, edit, and go through it over and over again for months. Some days just felt so suffocating. It wasn’t objective at all.

You cannot imagine how many womxn actually need to read it, to be reminded to love themselves and not be sucked into thinking that they need to save the men that limit them and hit them. I wanted to create a safe space for young girls.

You’ve talked about how you’ve had to face the brunt of toxic masculinity despite your modern upbringing. Why do you think womxn take this kind of abuse even if they are educated and privileged? Because we’re a product of our upbringing, our conditioning, and our history. We see our mothers do it, our grandmothers do it, our neighbors, our heroines, or role models, our relatives, our friends – everyone I know in some way or the other gives in to patriarchy on a daily basis. Education and privilege don’t change the fact that the kind of rights we are demanding are not more than a generation or two old if even that.

Feminism is still an active fight for our rights on a daily basis. And so even the best of us end up being patriarchal when we least expect it because patriarchy is what we know best, it’s what we’re raised to know. I believed for years that taking up more space was my fault. Unlearning patriarchy is extremely difficult.

In order for there to be an entirely feminist society with equality and equity, we would have to raise one. And in order to raise one, we must start creating little trails with our words and our actions, for more and more womxn. We need to become a bigger part of our history and we need to break the pattern of tolerating abuse. We need to stop glorifying the sacrifices of womxn and start actively talking about why womxn do not need to sacrifice their own lives in order to be appreciated.

You’ve opened up about mental health. What are your observations about the mental health issues of the youth today?

I wish mental health was more prominent, more accessible. We need to make this discussion mandatory in schools, societies, and households. I’d like to see it happen more often in families, in couples, in marriages, in individual lives. There is no stigma for going to a doctor for a broken leg or having a trainer for your body, but the moment you have a therapist, suddenly it’s a problem.

The funny thing is, in order to function and use your body, you first need a working mind. And yet it is this mind that we do not nurture nor look after.

With time, we are becoming more open about mental health, but still more needs to be done. The only way to create a safer space is to talk about therapy more often and encourage our friends and loved ones to seek help – not only when something is wrong but regularly. Self-care should become a routine, not a cry for help.

As I mentioned in my book, half of the therapy most of us are getting is due to the fact that others around us refuse to get therapy.

You have a chapter called ‘Tit’ and you have said that feminism has a lot to do with “vaginas and tits”. Do you feel claiming these words and body parts helps empower womxn?

More than just claiming the words, I think it’s also claiming the body parts. Men have absolute control and right over their bodies; they are rarely ever scared of being ‘raped’. And yet most womxn I know have thought about it regularly during day-to-day activities.

Evidently, there is a problem. Womxn do not have control over their bodies… we are always afraid that we’re going to be raped or molested or assaulted, and very often we are. To take back control over our bodies is such an important part of our confidence and our independence.

To me, owning my sexuality and my body is extremely empowering. It’s not even about nudity or exposing, it’s about having the choice to choose for yourself. 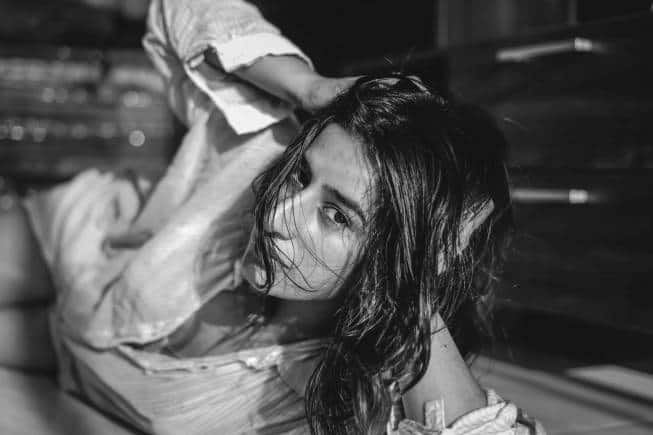 To me, the word womxn helps me identify with myself, says Saloni Chopra

I start the chapter ‘Tit’ with the quote, “We minimise a woman’s worth to her body parts, but demand that she play no part in owning them”. I think having ownership of our own bodies, where we spend our absolute entire lives, can definitely be empowering.

You’re extremely visible and active on Instagram. How does that impact your personal mental health and how do you see your relationship with technology?

I have my phases with the internet. When it comes to mental health, I’m usually okay because I am very careful about who I follow, what I allow on my feed. I honestly believe we must all filter our feeds. On most days, the internet motivates me and makes me learn, educate, ask questions. I follow podcasts and people I genuinely admire. I have a safe space outside of the internet with my friends and family that I know will always be true to me, and that I think is really important.

It just really breaks my heart when I see fashion and lifestyle influencers more popular than activists, politicians, young womxn talking about body positivity and the environment. You’re suddenly forced to accept the ugly truth: that most people, including you and me on many days, only want to be entertained in the most basic of ways. We want an escape from our lives, whether that’s through beauty or unattainable desires or travel or gadgets. It’s a trap, and we are all absolutely in it, all of us. That’s when I go through a phase… ha.

How can the internet and social-media platforms be a tool for feminism?

In so many ways, it already is. We know more about diversity and womxn’s rights and intersectional feminism and consent and our bodies – all thanks to the access of information we have on the internet. What a crazy yet amazing time to be alive! We should be grateful for it, but also be well aware of the responsibilities placed upon us and the place we hold in this world. We all have an impact on someone else’s lives in ways we aren’t even aware of.

It’s important to now be aware of what we follow, what we share, what we click on, and the information we forward. It all depends on how conscious we are of not being part of any herd mentality. I am grateful that I have a platform where I can hear so many different stories of so many womxn, and I would like to keep that space as safe and as versatile as possible. We could actually all do our part, by following more womxn that we believe in.