The Tippling Point | After all, a drink born out of pure love can't go bad, can it?

The story of Padre Azul - a premium tequila made with 100% Blue agave - starts with an intercontinental love story.

An agave plantation in Mexico.

Listen to the story of the famous Padre Azul, a silky-smooth premium blend designed to showcase the Mexican drink tequila in its purest form. With 100% blue agave, this tequila has got each of its details painstakingly perfected and handcrafted by experts - it is a bona fide work of art.

Its story began in Austria when Hans-Peter Eder, the son of a schnapps producer, fell in love with Adriana Alvarez Maxemin, a beautiful woman who hailed from Jalisco, Mexico. They met at the university in Heidelberg, Germany, where Adriana had come to study the German language. Would the couple marry despite their cultural differences?

For that, the boy had to get to Mexico to procure the official seal of approval from the girl's father.

Adriana's father had no serious objection to the proposal. But... he smiled. He had one condition he said, while laying a bottle of tequila on the table. The future-son-in-law had to toast every single member of the family gathered on the occasion. Eder went around smiling, clinking glasses, toasting every one of them, while slowly absorbing how deep tequila was embedded in Mexican culture and family.

The drink that came to Europe in the name of tequila was bleached clean of all such associations, he remembered. Could the Mexican way of life be captured in a bottle of tequila!

In Mexico, tequila is part of its daily rituals. Without it, there is no celebration, no death rituals, no solemn or funny moments. Its cohesive quality in keeping families and friends together is renowned. Before he came down to Adriana's home, all Eder knew about tequila revolved around the recurring themes of lemon wedges and headaches.

But now all of a sudden, the magic of pure tequila hit our hero like a hurricane. Could the camaraderie that he saw in the Mexican family (that would soon be his family too), be brought inside a bottle of tequila he could make! As the son of a premium schnapps producer, Eder already knew the basics of distillation.

He began collecting whatever information he could gather about the making of traditional tequila. The initial experiments pleasantly stunned his friends. Had they tasted anything like this? NO! They said unanimously. They never had anything like this back home in Europe. In the euphoria, Eder and his friends decided to introduce this amazing drink to the Continent.

With the help of his Mexican father-in-law, Eder initiated the attempt to bring the dream product to market. The bar was set high,

for the team didn't want yet another ordinary tequila in the European market, but only the best one that couldn't be topped by anything else, a tequila that keeps the 'wow' factor from the first sip to the last. 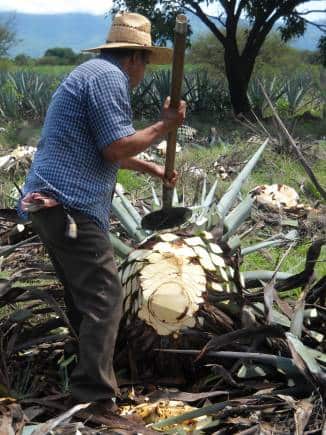 Representative image of agave being processed.

In 2014, Padre Azul Tequila was launched in European market. The liquid gold was born in a small distiller in Amatitan in Jalisco, the Mexican town of tequila. With 100% blue agave, they handcrafted a wonder drink that would take Mexican culture a long way ahead.

Ever since the super-premium tequila has been winning accolades and awards from competitions conducted around the world.

Padre Azul uses only the finest ingredient in their signature products. The makers see to it that the drink goes through a highly refined series of processes -the sure-shot recipe of success in the world of spirits.

So be prepared to fall in love once the lockdown lifts and you get to Mexico in that newfound freedom after the Covid era.
Manu Remakant is a freelance writer who also runs a video blog — A Cup of Kavitha — introducing world poetry to Malayalis. The views expressed here are personal.
TAGS: #Amatitan in Jalisco #Blue agave #Manu Remakant #Mexican culture #Mexico #Padre Azul #Story of Padre Azul #tequila #Tequila recommendation #The Tippling Point #weekend reads
first published: May 15, 2021 11:47 am