Record number of Indians sign up for the 125th Boston Marathon

Unlike previous years, there's no qualifying time and participants can run the virtual marathon in their own local area to earn the Unicorn finisher medal.

Ask any marathoner – amateur or professional – about his or her wish list and chances are that the Boston Marathon would be at the top. The world’s oldest annual marathon that traces its origin all the way back to 1897 is undoubtedly the gold standard among all the marathons held globally.

Qualifying for the prestigious 42.2-kilometre run held every year in Massachusetts is in itself considered an honour – a bragging point too - as participants eye the famous BQ - Boston Qualifying - timing to be a part of the elite group of runners at the start line.

While many professional and serious runners are able to qualify for the Boston Marathon each year, the larger community of amateur runners across the world is left sitting at home and watching the live stream of the event.

To commemorate the 125th anniversary of the run, the Boston Athletic Association (BAA), which organises the event, has opened registrations for a virtual marathon that participants can run anywhere in the world.

Simply put, anyone can register for the virtual marathon and then run 42.2 km in their local area in one go between October 8 and 10. The run record has to be submitted to the organisers post which the unicorn medals would be couriered.

More importantly, registration for the virtual run does not include any tough qualifying criteria except that one has to be at least 18 years old.

Over 400 Indians in the fray

Interestingly, India is among the top nations in terms of number of registrations in the virtual run, which has seen citizens from more than 100 countries register till date. In an emailed response on Tuesday, BAA Communications Manager Chris Lotsbom said there were 283 citizens of India and 129 residents of the country already registered in October’s virtual race.

Incidentally, 33 runners from India completed the virtual version of the run in 2020 – the first-ever virtual edition, occasioned by the COVID-19 pandemic. Last year, however, only those who had qualified and registered for the in-person run were allowed to switch to the virtual version.

33 runners from India completed the marathon in 2020, the first time the run was conducted virtually due to the COVID 19 pandemic.

The current year would see the first independent virtual version of the Boston Marathon that would allow amateur runners also to participate. Meanwhile, the BAA is also organising a virtual 5 km run between April 16 and April 18. The 5K run has seen entrants from 67 countries, including 21 from India.

“Considering we will have a smaller in-person field size this year (20,000 entrants), a Virtual Boston Marathon provided a great opportunity for runners of all ages and abilities to experience the thrill of earning a Boston Marathon finisher medal within their neighbourhoods, no matter where they are in the world,” said Lotsbom.

“Runners do not need a qualifying time to enter the Virtual 125th Boston Marathon, and many have been viewing this year’s race as a once-in-a-lifetime challenge which they can complete from the comforts of home,” he added.

Qualifying for the Boston Marathon is not an easy task, especially for amateur runners. Depending on the age category, the marathon has different cut-off times for men and women to be eligible to register for the in-person event. 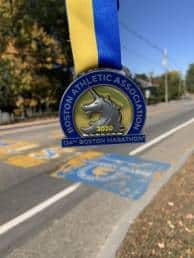 For instance, men between the ages of 18 to 34 years need to have completed a 42.2 km marathon in three hours to qualify for the Boston Marathon. For women in the same age category, the cut-off time has been fixed at 3:30 hours.

Finishing a marathon in three hours means a runner needs to cover every kilometre in 4 minutes and 16 seconds while maintaining this pace for the entire distance of 42.2 km.

The cut-off timing increases by a few minutes as the age bracket increases. So, for men aged 40-44, the cut-off time is 3:10 hours while for women it is 3:40 hours.