The Sydney-based telecom executive turned entrepreneur Eswaran is widely believed to own the world’s largest collection of Omega Speedmaster watches.

The word ‘iconic’ is much misused and overused, especially by purveyors of watches. But nobody will deny the Omega Speedmaster its exalted status in the world of horology. The chronograph, launched in 1957, has been part of every manned US space flight and accompanied American astronauts on the Moon since 1969.

Originally designed for car racing, it has thousands of fans across the world, and Bhaskar Eswaran is possibly the Speedmaster’s biggest fan. The Sydney-based telecom executive turned entrepreneur is widely believed to own the world’s largest collection of Speedmasters. 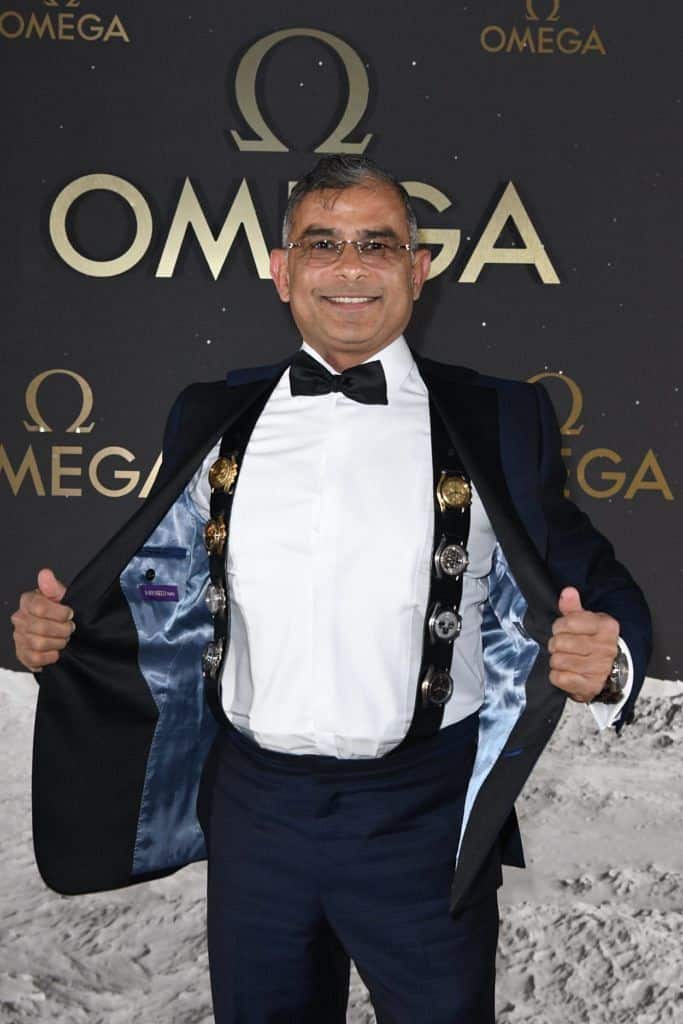 Eswaran with his custom-designed ‘Speedy Suspenders’

In 2019, he held an exhibition of his prodigious collection at an Omega  boutique in Sydney, and wears custom-designed  ‘Speedy Suspenders’ to Omega events he is invited to. He was among those who attended the 50th anniversary celebrations of the Apollo 11 moon landing in May 2019, in Orlando, and is also associated with the brand’s recently launched authentication program that provides an official certificate of authenticity for its vintage timepieces.

Over a phone call from Sydney, Eswaran tells me that he recently purchased a couple of bank vaults to house his watches. Eswaran, who grew up in Kolkata and emigrated to Australia in the late 1990s, is cagey about the exact number of Speedmasters he owns, but he lets on that he could wear a different one every day for well over a year. The surprising thing is he purchased his first Speedmaster just 12 years ago.

“I’ve always been fond of watches and have owned several timepieces from several major brands — Rolex, IWC — over the years,” he says over a phone call from Sydney. “But I bought those as rewards for myself for doing well in my career.” Eswaran picked up his first Speedmaster — the 50th anniversary Moonwatch — in 2008, but the inextricable connection between space exploration and Omega took time to register, he says. All that changed while he was researching the Speedmaster online after making his first purchase. “It was kind of a throwback to my childhood when most of my school projects involved space exploration and rockets, and of the thrill I experienced while following the Apollo 11 moon landing. Owning the watch is a way of realising one’s childhood dreams, or at least tapping into childhood fantasies of real world heroes,” says the 57-year-old. That sudden epiphany — and the happy memories it triggered — set him off on a geeky journey that is far from over. Eswaran has acquired Speedmasters from across the world, including India. While he has several vintage models, he is partial to Speedmasters launched after the 1970s. “I probably have nearly every Speedmaster model launched from the 1980s on, simply because they are generally easier to source and typically in better condition. But the model I wear most often is the 1969 Apollo 11 limited edition. ”

Today, his collection includes apart from — and obviously — the Speedmaster reference worn by Neil Armstrong and Buzz Aldrin —  the ‘Ed White’, named after the US astronaut who was the first man to conduct a spacewalk, in 1962; the stainless steel edition of the Apollo Soyuz model; “a NASA-issued X33 used in space” and “an X33 Skywalker owned and worn by Russian cosmonaut Gennady Padalka who holds the record for the most days spent in space”.

Among his most recent acquisitions is a Speedy Tuesday Ultraman edition. Eswaran also possesses two ‘Mission Cases’, each of which contains 23 Speedmasters. First introduced in 1997, only 50 such cases have ever been released. A gold edition of the Speedmaster, released in 1969

As we near the end of our conversation, I have an obvious question for the biggest and most passionate space and Speedmaster nerd I’m likely to ever encounter: What are the missing links in his collection?

“I’d love to pick up one of the Japanese limited editions, with the ‘panda’ dial, and one of the Speedmaster Professionals which stayed in space for 365 days aboard the MIR space station.”

And what advice would he give to young people who share his interests? “There is no one watch that has been as much a part of multiple significant moments in history as the Speedmaster,” says Eswaran. “It was designed as a professional tool, and in a world of ridiculously overpriced luxury goods, the standard production Speedmaster remains, in relative terms, an affordable watch.”