In a break from set norms, Isle of Islay based Bruichladdich sells “unpeated” no-age-statement whiskies, and shifts focus to the barley crop used and the process of making the whiskey.

The Bruichladdich Distillery in Isle of Islay. (Photo: Ian Rutherford)

Very few single malt brands are transparent about what goes into your glass of the golden liquid. Or even pay much attention to that big subject the world of luxury has been toying with – sustainability in production.

Unless you are talking about Bruichladdich, that Islay single malt which is an outlier in every sense of the word: unafraid of challenging preconceived notions about whisky and open about communicating their secrets to the consumers.

A few months ago, Bruichladdich Distillery launched ‘No Hidden Measures: Know What’s in Your Whisky’, to share information. “There are no shortcuts and no secrets. We’re an open book on who we are and how we make our whisky,” says Adam Hannett, the head distiller. “We believe that you have the right to know what’s in your glass and to understand where that flavour comes from.”

Bruichladdich has joined the movement seeking greater clarity on what is in the whisky you buy, and every bottle of their Classic Laddie carries a code that, when entered into a web page, will list every cask that contributed to it and in what proportion.

The initiative has helped consumers understand what goes into the making of three of Bruichladdich’s classic whiskies: The Classic Laddie, Port Charlotte and Octomore.

In India, Caitlin Hill, brand ambassador, Rémy Cointreau, is tasked with recounting how the whiskies are made—from origin to bottling, from ingredients to the distillation process. “From cask type to how the barley that is used is grown, there is a lot that goes into the making of a Bruichladdich whisky,” says Hill.

Have you ever considered what type of barley has gone into your whisky? The Bruichladdich distillery would like you to as part of a commitment to sustainability and transparency that transcends mere buzzwords.

Bruichladdich firmly puts the focus on ingredients including how and where the barley was grown. While most whiskies focus on just age and casks, Bruichladdich believes that the painstaking process of growing a barley crop or the way the casks are maintained contribute equally to how good the whisky is.

In an online tasting session, Hill introduced us to the various regions from which Bruichladdich gets its barley: while the Scottish Mainland Barley is grown in the Inverness-shire region of Scotland, the Scottish Mainland Organic is single-farm produce that varies according to year. “It is often creamy, sometimes grassy in flavour.”

Interestingly, while the stunning Isle of Islay on the 'whisky coast' of west Scotland is best known for its peaty, smoky whiskies, Bruichladdich’s The Classic Laddie is an unpeated single malt. Remember that bit about being an outlier?

Age not always a factor

So you believe the older the whisky, the better it is? “This isn’t necessarily true,” says Hill. “Age is not the only signifier of quality in single malt whisky.” For instance, younger whiskies retain more of the cereal and malt notes from the barley. While older whiskies, which have been matured longer than three years in oak casks, will take on the flavour of the casks.

What matters is also the age of the cask: a whisky matured in “tired wood” for a long time won’t take much flavour from the cask. “When vatting The Classic Laddie, the head distiller must take all these considerations into account, to balance the flavours of all the ingredients they are using,” says Hill.

To comply with Scotch Whisky regulations and EU law regarding age statements, distillers are legally only allowed to divulge the age of the youngest spirit contained in the bottle. “At Bruichladdich, the flagship bottlings are made up of multiple different spirits of different ages. We believe an age statement over-simplifies the complexity of our recipes. We rather speak about the complex process that involves maturation time, cask type and the influence of our raw ingredients,” adds Hill.

The Bruichladdich batches are made up of several components: 76 different casks, comprising four vintages of spirit, three different barley types and seven different cask types. “There is so much in the single malt: distiller’s vision, the provenance from which the ingredients and the whisky comes, the quality and their skills of our distillers.”

The people behind Bruichladdich were desirous of creating a whisky that represents the provenance it came from. “Their attitude was quite unlike anything in the whisky world at that time,” Hannett has said. “Where companies had become conglomerates as a means to survive, flavour diversity and nuance had been stripped out to produce a consistent, standardised product. Distilleries were adding caramel colouring and chill-filtering it – stripping out the natural fats – to create homogeneity that was easily recognisable and marketed globally.”

The foundation for The Classic Laddie is not a recipe set in stone. Unlike other single malts, the brand, year by year, focuses on the variety and provenance of how the barley shapes the spirit.

“Each batch of The Classic Laddie is, by nature, unique and subtly different, but it is ultimately our head distiller who curates this assemblage of our finest spirits, to showcase the classic, floral and elegant house style,” Hannett has said.

Ultimately, the mapping of the production and distillation process reveals the story of the bright turquoise bottle of the complex single malt that you hold in your hand. It may not state the age, but its lush heritage and the whisky distillation and making process put it right on top of a connoisseur’s list. 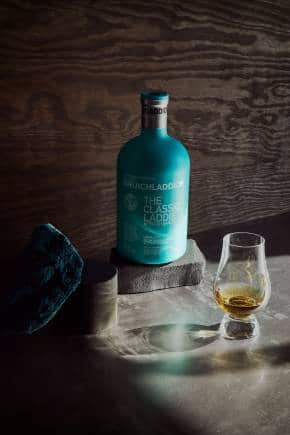 Bruichladdich is the first to achieve B Corporation status, an international certification that assesses a company’s environmental impact. Across the board, the brand has reduced plastic usage and is ambitious about making production carbon neutral by 2025.

The offices, bottling hall and visitor centre already are heated by energy generated from wastewater, and the electricity is from 100% renewable sources. The distillery is also planning to do build its maltings by 2023, which means the barley, right now malted for them in Inverness, will be done in-house.

Ultimately, what will matter most are the flavours and nuances that make Bruichladdich what it is.

The nose and palate

The Classic Laddie, a no-age-statement single malt, though it has been aged for a minimum of three years as is the norm for single malt. The notes are honeyed on the nose with distinct aromas of orange. On the palate, it is smooth and tastes of red apples and white grapes, with touches of cinnamon and brown sugar. The finish is malty, with notes of toffee.

The next time you pick up a Bruichladdich, don’t forget to check the finer details of your single malt on its website.