In this lockdown, we’re writing our collective futures by understanding our past

The current state of play in most countries is disbelief in leaders. If only they would come out and say that we don’t understand this virus, so everyone needs to pitch in and help.

Look at what the wearing of masks is telling us, ‘See more, talk less’. And we are collectively watching the actions of people who are meant to lead us out of this deadly pandemic. More and more people are realising how leaders around the world are hoping that the people will wear that mask over their eyes as a blindfold and agree with whatever is being told to them.

The current state of play in most countries is disbelief in leaders. If only they would come out and say that we don’t understand this virus, so everyone needs to pitch in and help. If only there were leaders like Ernest Shackleton who advertised: 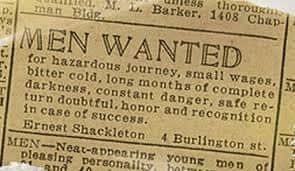 The Smithsonian Magazine says that this could be a myth, but it points us to a time when ‘ships were made of wood and men were made of steel’. Where have the leaders gone?

Kenneth Branagh’s Shackleton: Trapped in the South Pole is on Amazon Prime Video. He is and will remain one of my favourite heroes of all time.

On the American Independence Day, July 4, Disney Plus (DisneyPlusHotstar in India) made history of sorts by releasing the film version of ‘impossible to get tickets’ Broadway show called Hamilton. As an ambitious college student, I wanted to write under a pen name ‘Publius’ and my mentor pointed me to The Federalist Papers (85 essays written by Hamilton, James Madison and John Jay under the pseudonym ‘Publius’). The essays are not an easy read, but the lofty ideals echoing in the words have made me a fan of the man who wrote like his life depended on it: Alexander Hamilton.

The entire year’s subscription to the streaming service is worth that one show. For a fan of history and hip hop, this was a mind-blowing treat. Lin Manuel Miranda who has written songs your kids are singing today (Disney’s Moana) has made history easy to understand and the Disney Plus Hotstar made it accessible to all.

Tickets to the best seats for Hamilton were going for as much as $849 (is there any other way to watch a Broadway hit?), so you are in for a treat. They shot the film version over two live performances and one extra in an empty theater for the awesome closeups. I wish I were a student again and history was being taught like this:

Since we are in the United States virtually, let us do what all explorers of that new continent did: let us go West… Robert Redford has a way of looking at history that is unique. Plus he tells the story of the outlaws and the soldiers, the cowboys and the ‘Injuns’, and how the West was won so brilliantly, you will remember growing up with all the Westerns you read as a teen (Louis L’Amour, Zane Grey, Oliver Strange). It’s all there for you to binge-watch

There is a price men and women have paid for wars and for land. Today when the Black Lives Matter protests are fanning the flames to destroy systematic racism not just in America but across the world, I hope that someday we, in India will feel the heat too. A beautiful film that talks about the great divide in America is Mudbound. ‘You’re in Mississippi now,’ is such a powerful reminder that the rules have been different forever.

There are revolutions everywhere. And filmmakers the world over have found ways to subvert and spread the message in subtle ways. The Chinese filmmakers hide behind myths, others, like this:

Every revolution will throw up a hero or two, and legends that are spoken about in hushed words. Everyday heroes who save lives literally and metaphorically have David Bowie singing an anthem to them. Everyday heroes stand up and are counted, and even though Hamilton is said to have aimed at the sky during his duel with his long time political rival Aaron Burr (the honourable thing to do in duels), all his life he did not let a single chance of writing history. So when you travel to New York next, visit the American Museum of Finance. And find inspiration from the duelling statues of Alexander Hamilton and Aaron Burr, and remember the words to this song:

‘Hey yo, I’m just like my country,
I’m young, scrappy and hungry,

And I’m not throwing away my shot.’

(July 12, tomorrow, is the day when Alexander Hamilton died after his duel with Aaron Burr in the Greenwich Village, New York in 1804)