How Mumbai Gallery Weekend is getting its mojo back

After a period of reflection and renovation, gallerists hope to revive the in-person aspect of art-viewing. Some 22 art venues in the city will stay open late to welcome visitors to this year’s Mumbai Gallery Weekend.

Many art lovers spent the last year learning to pinch and zoom the details on modern masterworks in virtual exhibitions, or press and hold Instagram Stories to appreciate the finer points of contemporary paintings. They rarely had the opportunity in that period to be in the same room as the pieces, overhear the assessments of strangers, and hover over platters of wine and hors d’oeuvres. Some of the old-normal magic is expected to return as galleries, which gradually reopened towards the end of 2020, will coordinate to take in visitors for longer hours until January 17 as part of the Mumbai Gallery Weekend. “Everything has become so ‘online’. It will be nice to see the tactility of art again,” says Viraj Mithani, an artist who leads art walks in the city for Carpe Arte. The gallery weekend concept, which extends across venues in southern and central Mumbai, has marked the city’s culture calendar ever since its beginnings in 2012. That was when a few art spaces in the Colaba area first decided to host free previews and talks — sans invitations or RSVPs — so that more people would feel comfortable walking into spaces that can otherwise seem intimidating. Carpe Arte and a few other groups conduct interactive tours of the spaces for non-specialist audiences.

The art world largely coasted through the pandemic. Galleries and auction houses had already been embracing digital sales before the outbreak, so their attention turned to sprucing up those means to reach out to collectors. Christie’s India, AstaGuru, and Saffronart among others reported steady sales in the region. Meanwhile, artists themselves found a muse in the loneliness and absurdity of the moment. Many of them pledged their art to help those affected by the lockdown, including struggling members of their own industry. 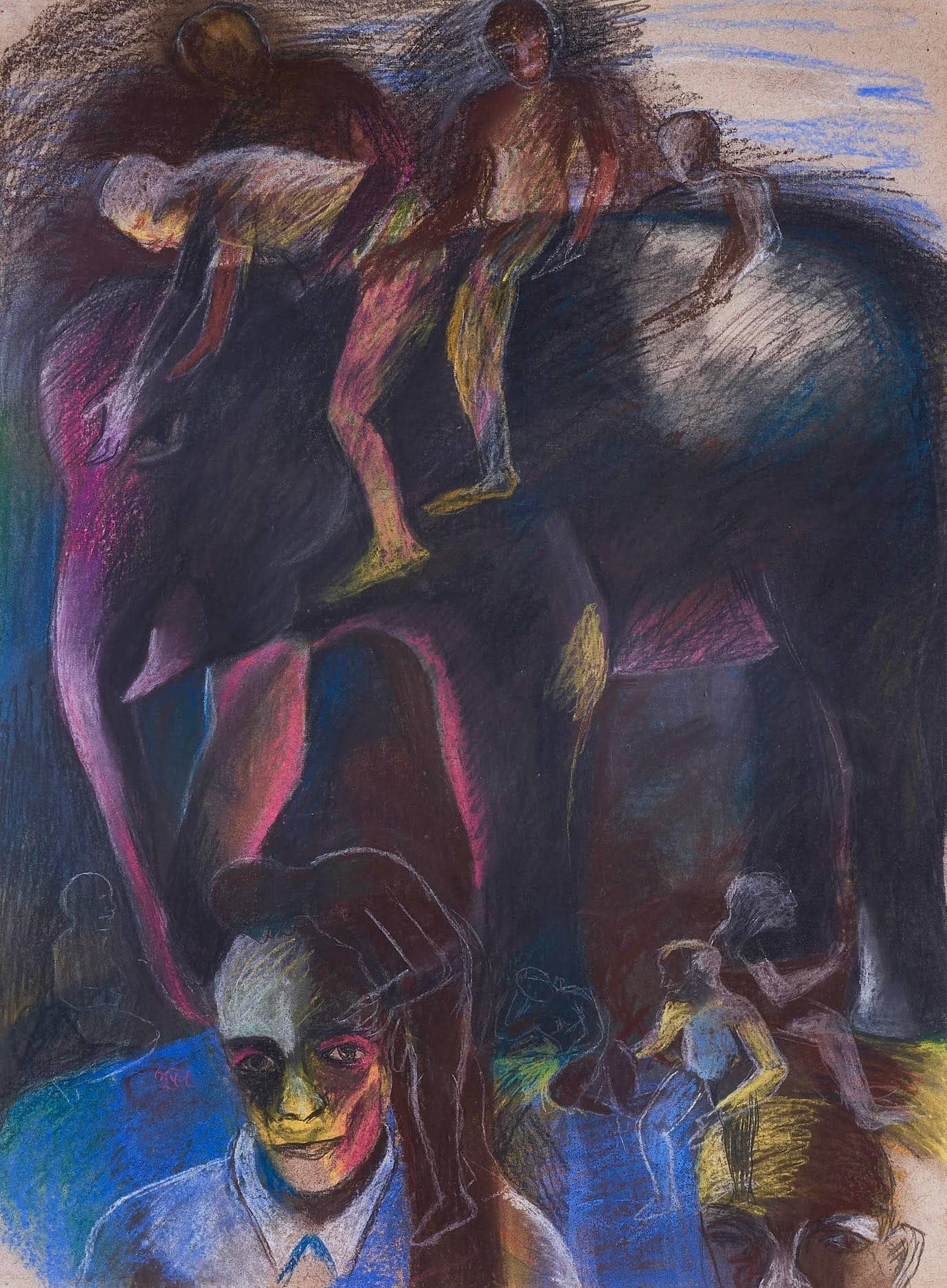 Men on Elephant, Bhupen Khakhar, oil and pastel on paper.

Although a few venues reopened as early as last June, the trickle of visitors is still small. The prayer behind this edition of the event is to bring people back. “We hope more people will start venturing back to galleries in greater numbers,” observes Tara Lal of Colaba’s Chatterjee & Lal, which is among the 22 participating venues. “The normal gallery experience, even in non-COVID times, is one of being left alone to enjoy the art with few if any other visitors around you. As such, it makes for one of the safer public activities.” The organisers will be following the basic checks — masks, social distancing and temperature scanning — and taking people inside in batches in case of more visitors.

Given its aspirations to democratise gallery-going, the Mumbai Gallery Weekend does not rely on a single connecting thread. Instead, all the venues involved simply aim to time their most important openings to coincide with the weekend. Colaba-based Akara Art will show rare oil paintings by Santiniketan’s Jogen Chowdhury, who is mostly known for his crosshatch works, and a mix of paintings, watercolours, and ceramics by the Baroda Group’s Bhupen Khakhar. The two-person exhibition will be titled ‘Proximate Paths’ because both artists went on to have similar trajectories. “Both artists began defining the identity of their subjects through the prism of class and region,” says gallerist Puneet Shah. Another prominent post-Independence painter KG Subramanyan’s works — from his early tentative strokes in the 1950s to the 2000s when he was strongly influenced by the folk arts — will be mounted in the Prabhadevi premises of Saffronart which is to auction them later this month.

The galleries will not be hosting any art-themed talks or workshops, however, like in past years. The novelty in this edition comes from the inclusion of designers Atelier Ashiesh Shah and Rooshad Shroff, as well as an antiquities store — Natesan’s, which will show historical works in stone, bronze, wood and paper, the rarest of which are non-exportable. “Increasingly, the worlds of design and the fine arts have converged over the last couple of years. Equally, there has been a noticeable trend of contemporary art being shown together with historical material,” Lal says, explaining the event’s new direction. Shah will display, among other works, a ‘Lingam Lamp’ which he designed and made in cast aluminium during the lockdown, while Shroff will throw open his Horniman Circle studio to exhibit handmade objects such as embroidered chairs.

Contemporary artists will show pieces they crafted at various times in their practice, which have become especially meaningful in present circumstances. Chemould Prescott Road in Fort will reopen after 10 months with Aditi Singh’s ‘some things are always burning’. The ink paintings were born of the artist’s contemplations on walks in Nepal, the Sierra Nevada Mountains, the Lake District. “We answer a need to come into a relationship with wild places when we push our minds and bodies to places that are impossible to find indoors,” notes the gallery. In Colaba-based TARQ, Rithika Merchant’s watercolours and collages will attempt to understand environmental degradation. “In light of the pandemic, I think her themes of looking for a new world, for a utopia where we can go once the anthropocene is over, are even more important,” says gallerist Hena Kapadia of Merchant’s ‘Birth of a New World’.

The Mumbai Gallery Weekend will be on from 12 noon to 8 pm until January 17. A schedule is available on www.mumbaigalleryweekend.com
Ranjita Ganesan is a journalist and researcher based in Mumbai.
TAGS: #Art and culture #Mumbai Gallery Weekend #weekend reads
first published: Jan 17, 2021 07:29 am