Gone to Goa: Five settlers explain why they moved to the state

Goa offers a perfect balance between rural and urban lifestyle. Here, five settlers who call it their home share their experience and speak about what keeps them there.

There’s something about moving to a new city. Walking through busy streets and discovering unexplored corners; eating in shacks that sell traditional delicacies to the tony restaurants that lay lavish spreads on the table; gaping at ancient monuments that have withstood the vagaries of time to stepping into modern edifices that speak another architectural language. Many have moved to Goa and now call it their home. Different people came here for different reasons. Different people are staying here for different reasons.

Here, five Goa settlers talk of why they moved to Goa and what keeps them here. Srishati Singhal with her son Mayan Ellis in her old-style Portuguese home in Assagaon.

I was 7-months pregnant when the heart yelled a ‘Now or Never’ move to Goa. It was not the first time Goa had crossed my mind. In Delhi, the air is polluted, the pace fast, and for a few years I had been speculating about moving to Goa. Two years ago, my partner and I flew in, stayed for a week, found not only a home in Nachinola but also a midwife for the preferred home birth for the baby. That’s it. That’s how we moved in a jiffy. Lock, stock and the baby in wait.

In the past two years, we have moved from Nachinola to an old Portuguese home in Assagaon and not for a moment do I miss my Delhi life. I chose the hermit life and Goa is the ideal spot for it. Goa is more receptive, more adaptive; people are open minded, and what keeps me here is the Slow pace, Susegado (derived from the Portuguese word sossegado ‘quiet’), the beaches and the ‘chill’ attitude. I have trained as a Tantra teacher in Greece and Finland and been to several cities around the world for Tantra and spiritual practice but I find that the audience here is more international. I also organised Goa’s first Tantric speed-dating.

As my partner is from England, we will straddle two continents. But in India, Goa will always be home. Uma Shahi in her villa in Monsoon Meadows, Majorda.

Many years ago, I moved from my childhood home in Patna. But the green landscape, the quiet and the charm of small-town life were never forgotten. I was looking for another home far from the maddening crowd of Gurugram and as luck would have it, the lady from whom we bought the house in Gurugram had a villa in Majorda, Goa. She recommended it. I had no family in Goa, a few friends but what drew me to Goa was a nostalgic similarity to my childhood world. Goa is different from all the other cities that I have been to. It is like a small town loaded with fun things to do and a deeper sense of community.

In 2019, when I decided to buy a home in Goa, South Goa became the preferred choice because it suited my budget as well as it was not caught in the cliched touristy trappings. For me, the beaches are a huge attraction. The gourmand in me is lured by the countless eating-out options - from the humble shack to the tony restaurants, choices galore. Add to it, healthy air and lots of greenery and fresh produce. What more does one want in life, anyway. 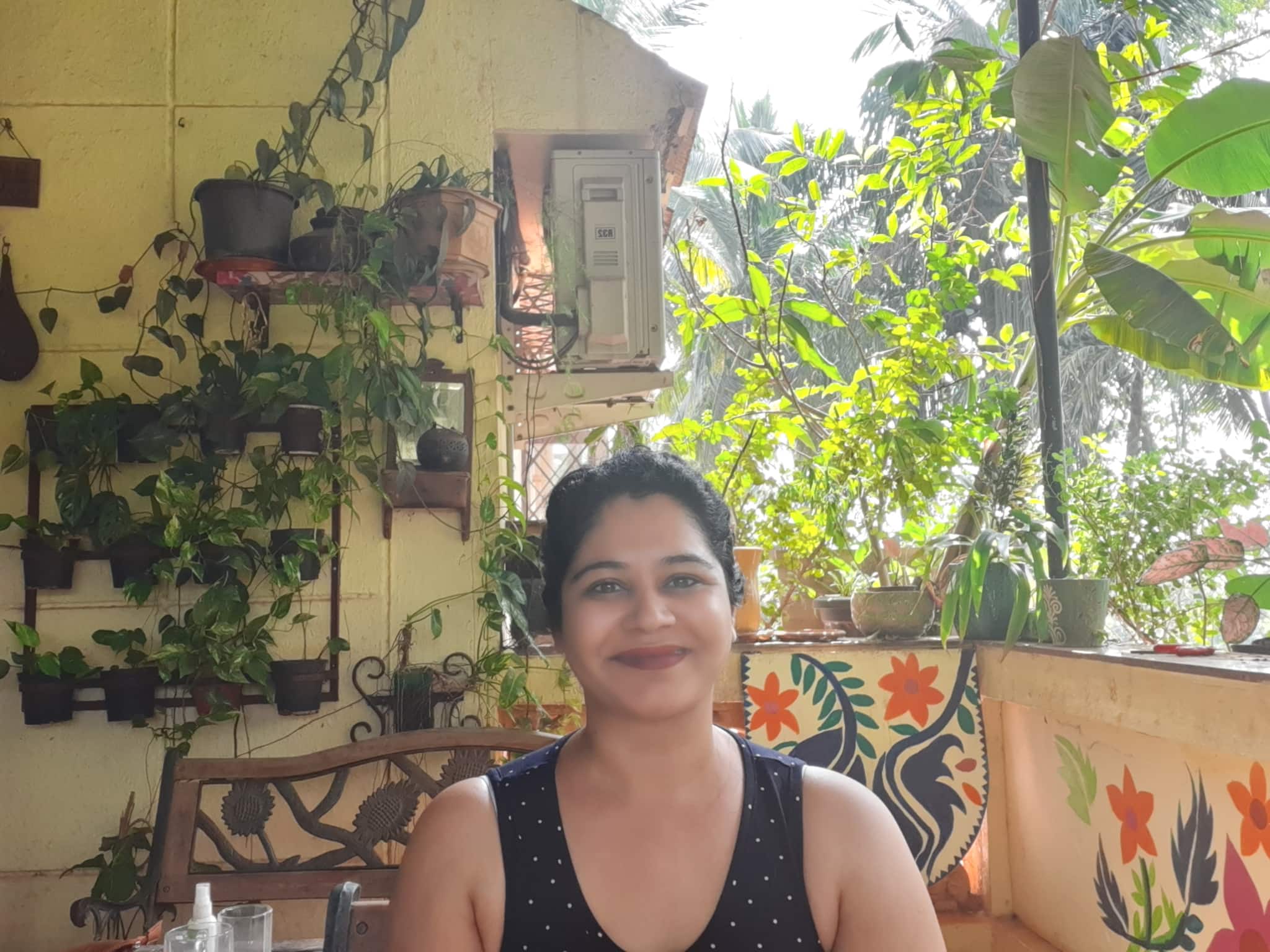 Gauri Gharpure amidst her plants in her apartment in Alto Betim.

After a degree in journalism from Columbia University, I wanted to return home. Mumbai was an obvious choice but then a work opportunity arose in Goa and I moved. Initially, the reason to call Goa my home was a stint with a magazine. I worked, did a bit of craft, paper jewellery and gradually my romance with Goa blossomed. When the magazine downed its shutters, my love for Goa did not fade. I wanted to write and chose not to move out. First, I lived in a rented apartment and then bought an apartment in Alto Betim in 2015. The neighbours are a bit nosy but I still will not live any place else because Goa allows you to be yourself. There’s a certain coziness in town that is not tangible elsewhere. I have lived here for almost 8 years and sometimes I do get disheartened with the insider-outsider debate but life here has been worth every moment. Here, I wrote my first collection of poems Everything in Between which was recently published by Writers Workshop, Kolkata (74 poems, 92 pages, Price: Rs 300). For now, Goa feels like home. It could turn out to be my forever home. 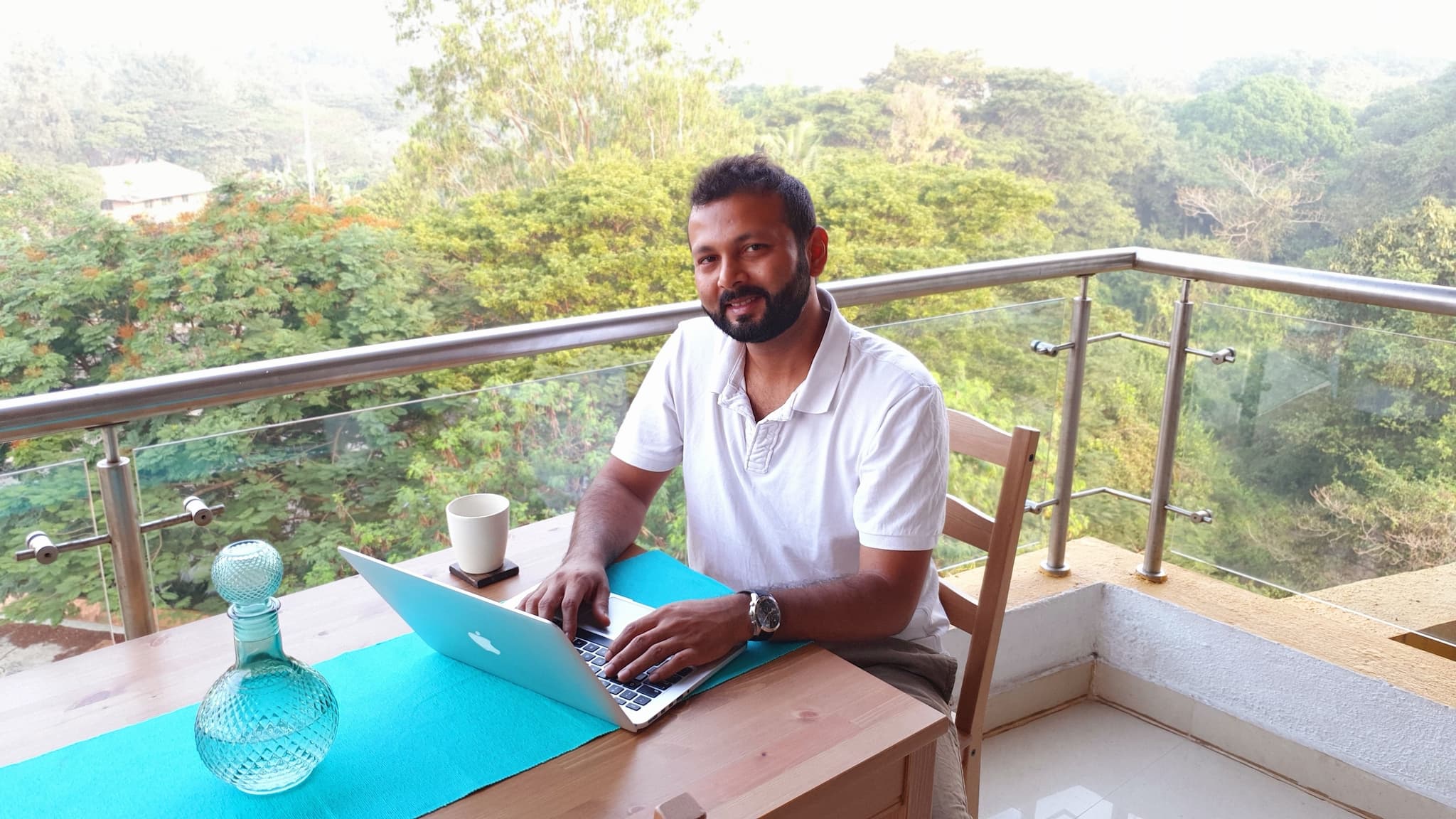 Mayank Prakash in the balcony of his home in Miramar.

Work From Home is not a new concept for me. Having co-founded Cognit Technologies three years ago, we have always worked from home. Then, when a virus shut the world, I thought it was time to move to a calmer, greener place where my inherent love for the outdoors and my vegan lifestyle could be sustained. From a 1BHK in Mumbai, my wife and I moved to a 3BHK in Miramar for the same rent. As a chronic WFH person, I always yearned for a dedicated workspace which was unaffordable in Mumbai.

Goa offers a perfect balance between rural and urban lifestyle. With over 70 percent forest cover, we have mothballed the air purifiers; the bicycle that was gathering rust in Mumbai is now put to good use every weekend. Morning run on the beach, driving through those beautiful narrow roads, going on hikes, swimming in the sea and occasional eating out at beautiful cafes are some of our big joys here. Add to it the fact that with everything from housing, electricity, fuel and fresh vegetables being much cheaper than Mumbai, maintaining a good standard of living here is not drilling a hole in our wallet. Plus, here we can finally accomplish our '52 weeks-52 new places’ dream.

At first moving to Goa seemed like an impulsive and irrational decision. Today, after spending two and a half months here, I am happy I made that choice. I do not see myself moving to another city. Not for the next two years at least.

I was working with HSBC in Bengaluru but when my husband who runs/builds and manages property complexes found a golden opportunity in Goa, I quit my job, packed a few things and 4 dogs in the car and drove from Bengaluru to Goa. That was nine years ago and there has not been a moment of regret. Opportunity for a better life was the primary reason to move but now we are not going anywhere else. This is home.

Goa was different when I first moved here. There was no online food delivery and I was not aware of all the fresh fish and produce that you can source locally. I discovered all this later. What has not changed and gets better is the good quality of life. While other cities are going breathless due to pollution, in Goa, you can breathe fresh air and never worry about your lungs. It is certainly not cheap to live here but the existence here is still very holistic.

There are a few gaping holes but I happily ignore those because I have gone back to being more basic in my existence. I cannot think of living anywhere else in the world.
Preeti Verma Lal is a Goa-based freelance writer/photographer.
TAGS: #Goa tourism #Living in Goa #weekend reads
first published: Jan 23, 2021 07:39 am