From Sigmund Freud and his daughter Anna to Ernst Hemingway and his three boys, here's looking back at some famous fathers, daughters and sons who were devoted to each other.

Father’s Day was founded by Sonora Smart Dodd (1882-1978), daughter of American Civil War veteran William Jackson Smart, and the first Father's Day was celebrated on June 19, 1910, in Spokane, Washington (USA). In 1966, US President Lyndon B. Johnson signed a presidential proclamation declaring the third Sunday of June as Father’s Day. Since then, people in other parts of the world have started observing the day too.

But of course, fathers and children cherished each other even before Father's Day became a thing. This Father’s Day, let’s look back at a few great relationships.

Atticus Finch, the protagonist of Harper Lee’s To Kill a Mocking Bird is the No.1 hero on American Film Institute’s Greatest Heroes & Villains list (Gregory Peck played Finch in the film). The widower Atticus is also one of fiction’s favourite single dads. But he was not entirely a figment of Harper Lee’s imagination - she borrowed the goodness of her father Amasa Coleman Lee to create the literary icon. Like Finch, Amasa was a successful small-town Alabama attorney and state legislator. “My father is one of the few men I’ve known who has genuine humility, and it lends him a natural dignity. He believed that people are basically good, capable of improving, and as eager as the next person for a better future,” Harper had said in an interview. This real father-daughter relationship created one of the most loved dads in literature.

J.R.R. Tolkien and his son Christopher

We have all read The Lord of the Rings but not many talk of the contribution of J.R.R. Tolkien’s son Christopher who was closely associated with the literary journey of his father. First, as a child listening to the stories of  Bilbo Baggins (The Hobbit) that J.R.R. read to him and his brothers, John and Michael, after tea in the evening. Christopher was paid two pence per correction. As a teenager and young adult, Christopher was offering feedback during the 15-year gestation of The Lord of the Rings. He drew the maps of Middle-Earth, and in the 1970s, re-drew the main map to clarify the lettering and rectify errors and omissions. J.R.R. would also send portions of The Lord of the Rings to his youngest son for contribution while he was serving in the Air Force. After J.R.R.’s death, it was Christopher who carried forward his father’s legacy.

Anna Freud, the youngest of Sigmund Freud’s 6 children, was the only one who followed in the footprints of her famous father. Born on December 3, 1895, Anna, founder of analytic child psychology, was the closest to her father. When she was 4, Sigmund wrote about her to a friend, “Anna  has become downright beautiful with naughtiness.” Anna, was devoted to her father and enjoyed an intimate association with developing psychoanalytic theory and practice. She often said that she learnt more from listening to her father and his conversations with their frequent guests than she did at school. 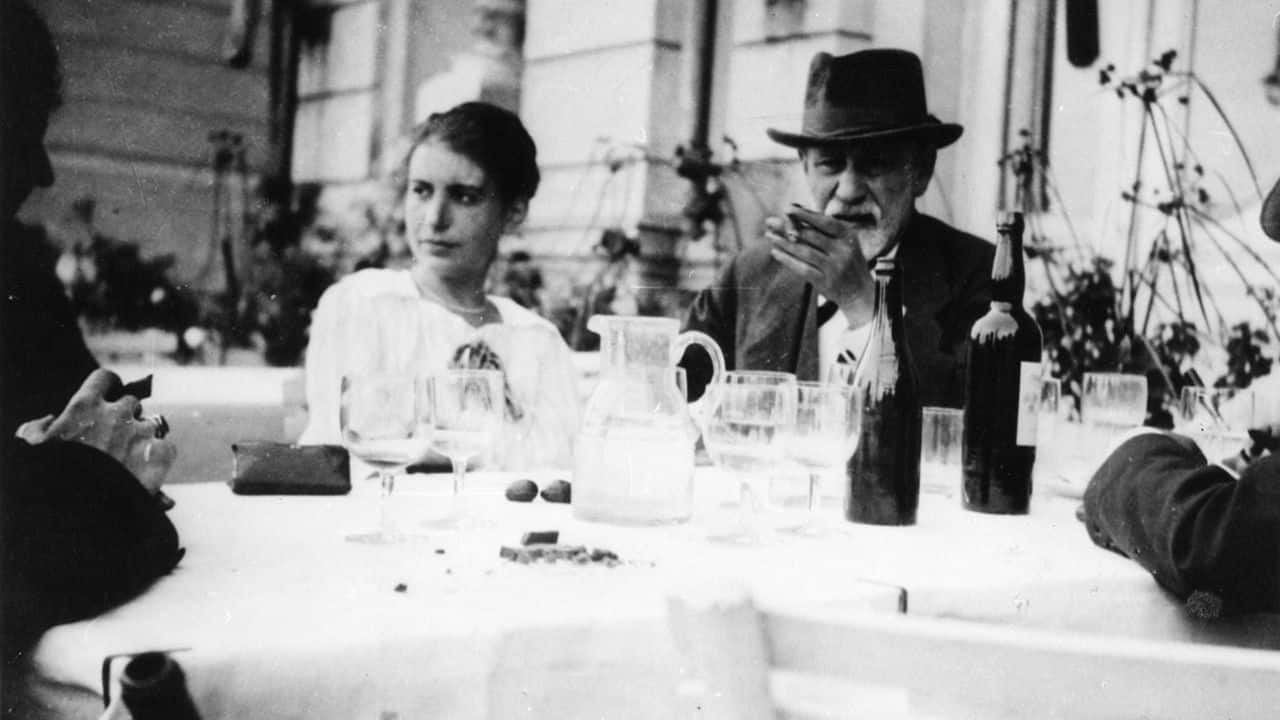 Anna and Sigmund Freud at the VIth International Psychoanalytical Congress, The Hague 1920. (Photo via Wikimedia Commons)

Mark Twain and his daughters

Not many know of Mark Twain’s A Record of Small Foolishnesses. When his daughters were small, Twain kept a journal of their silly sayings.

Examples: Once when Bay (Clara) was 3 or 4 years old, she said, ‘Mamma, I brang you these flowers’ — paused, then corrected herself — ‘No, I brung them’.

Susie (being ordered to bed) — said, thoughtfully — ‘I wish I could sit up all night, as God does’.

Twain doted on his daughters, Susy, Jean, and Clara. When Susy was 13, she wrote a biography of her father, which was published as Papa: An Intimate Biography of Mark Twain. When she died at age 24, Twain wrote a 64-page passionate eulogy (In Memory of Olivia Susan Clemens, which was later called A Family Sketch). Clara was the only one who outlived her father and strictly monitored Twain’s literary legacy. 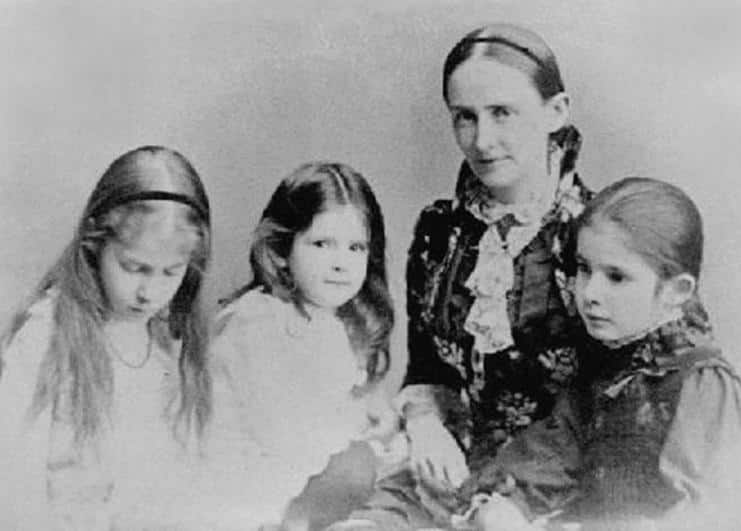 It was a long-distance father-daughter relationship. Pandit Nehru was in Allahabad (now Prayagraj) while Indira Gandhi (nee Priyadarshi) was studying in Mussoorie. But a doting father wanted to ‘teach and instruct’ his 10-year-old about natural and human history. Written in English during the summer of 1928, Nehru's letters to his only child were education pieces.  Titled Letters from a Father to his Daughter, the collection of 30 letters was first published in 1929 by the Allahabad Law Journal Press. It was later translated into Hindi by novelist Munshi Premchand under the name Pita Ke Patra Putri Ke Naam. 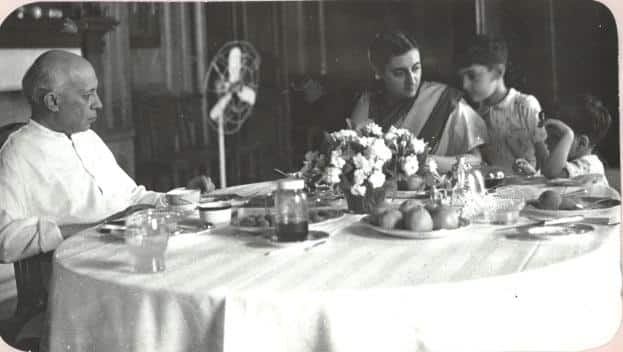 Jawaharlal Nehru with Indira Gandhi and her sons, Rajiv and Sanjay, at Teen Murti House. (via Wikimedia Commons)

Charlemagne and his son Pepin

Known as the Father of Europe, Charlemagne was the first ruler of the Holy Roman Empire. He had several sons but perhaps the most known was his (probably) illegitimate son Pepin, the Hunchback, named so because of a spinal deformity. Charlemagne treated Pepin well but when he chose a younger son as heir to the throne, Pepin hatched a plan to kill Charlemagne, his wife and his legitimate children. When the plan was discovered, instead of executing the rebellious son, Charlemagne commuted Pepin's death sentence, had him tonsured and exiled him to a monastery. The Charlemagne-Pepin father-son relationship has been the subject of several historical fiction.

Sir Thomas More, venerated in the Roman Catholic Church as Saint Thomas More, often called his eldest daughter ‘My Dearest Meg’. Meg was Margaret Roper, English writer and translator. Her relationship with her father is often cited as an example of filial loyalty. When More was imprisoned in the Tower of London, Roper would smuggle in/out More’s letters, which she later collated into a dossier. When Sir More was beheaded in 1535, she bribed the man whose task it was to throw the decapitated head into the river. She preserved her father’s head by pickling it. Margaret also tried to clear her father’s name posthumously of all charges of treason. 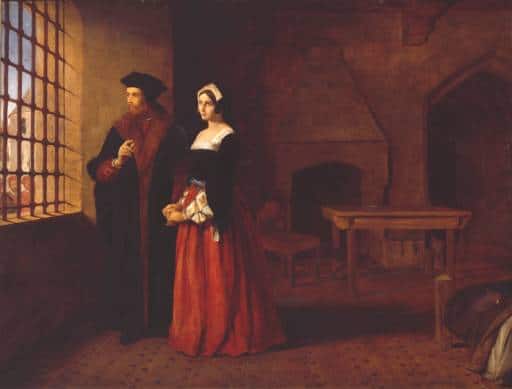 Painting of Sir Thomas More and his daughter (1844), by John Rogers Herbert. (via Wikimedia Commons)

Ernst Hemingway and his sons

Everyone called Nobel Laureate Ernst Hemingway ‘Papa’. The best way to peek into the details of Hemingway as a father is to read his letters written between January 1932 and May 1934 (Hemingway Letters Project). It was during this time that Hemingway explored fatherhood in his fiction. In real life, he had three sons whom he taught to fish and shoot when they were older. In his letters to his sons - Jack, Patrick, and Gregory - Hemingway would sometimes draw dots in his letters, a Hemingway family tradition called ‘toosies’, which represented kisses.
Preeti Verma Lal is a Goa-based freelance writer/photographer.
Tags: #books #family #Fathers Day #history #Relationships #weekend reads
first published: Jun 20, 2021 08:20 am