Changing behaviour—one mime at a time

In the first of a two-part series on behavioural economics, we discuss how influencing behaviour can have a wide-spread impact—from saving lives to conserving water.

A mayor of Bogota was able to halve road deaths by using mimes to improve traffic and citizens’ behaviour.

Have you ever been forced to screech to a halt to save a pedestrian from getting hit by your car? It just happened to me. It wasn't screeching and halting, but yes, it was a sudden, unexpected break. Short and stout, a middle-aged man, wearing a green sweater and a blue mask, was right in front of my car, staring at me in bewilderment.

Jaywalking is considered a safe behaviour by many. Now imagine you had to halt at a star painted on the road? That's what a Colombian mayor did years ago to prevent deaths caused by jaywalking. You may argue we do not even have zebra crossing marked on many roads but that is a debate for another day—we still have people dying in road and rail accidents.

Mayor Antanas Mockus, whose work is now published as a case study by Harvard, used different strategies to change behaviour of the people of the city, including painting stars on spots where pedestrians had died in traffic accidents. A mathematician and philosopher, Mockus was the rector of the National University in Bogotá, Colombia, before serving two terms—1995 to 2004—as the mayor of the Colombian capital city.

In an opinion piece, The art of changing a city, he wrote, “Bogotá’s traffic was chaotic and dangerous when I came to office. We decided the city needed a radical new approach to traffic safety. Among various strategies, we printed and distributed hundreds of thousands of “citizens’ cards”, which had a thumbs-up image on one side to flash at courteous drivers and a thumbs-down on the other to express disapproval. Within a decade, traffic fatalities fell by more than half.” Citizens’ cards with thumbs-up for courteous drivers and thumbs-down for bad behaviour were part of a successful drive to check traffic deaths in Bogota.

Another innovative idea was to use mimes to improve both traffic and citizens’ behaviour. Initially, 20 professional mimes shadowed pedestrians who didn’t follow crossing rules: a pedestrian running across the road would be tracked by a mime, mocking their every move. Mimes also poked fun at reckless drivers.

The programme was so popular that another 400 people were trained as mimes. Traffic fatalities dropped by more than half in the same time, from an average of 1,300 per year to about 600. Mime artistes’ idea was replicated in Peru, Lima, too, to prevent road fatalities.

In this week’s Habits for Thinking, we are circling back to a topic we have discussed earlier too—behavioural economics and nudge. This is a two-part article and will continue next week too. Behaviour economics uses psychology to understand the decision-making behind an economic outcome such as buying a product. The study refers to psychology, neuroscience and economics in understanding how people behave and act.

The behaviour and subsequent decisions to act have an impact on people yet they continue to behave in an unsafe manner, like the man in the green sweater, who crossed the road more as a copycat behaviour seeing others in front of him.

Governments and policymakers recruit behavioural economists to change behaviour in the right direction. It has been done in many countries, including ours.

“By knowing how people think, we can make it easier for them to choose what is best for them, their families and society,” wrote Richard Thaler and Cass Sunstein in their book Nudge, which was published in 2008.

Also read: You can change the game with a 'nudge'

This is what the mathematician mayor of Bogota did. He used insights that influence behaviour and designed solutions that were not easy to miss, that were engaging to bring in change.

2 Social factors: How people think and act is many times influenced by people around them. Jumping a signal while driving because the one in front of you jumped is an example or to litter in a public space like parking, roads, etc is another example of copying behaviour.

3 Environmental or design factors: Nudges and other design elements are chosen to bring a change in behaviour. These are externally designed like mime artistes on the streets or messages through voice on phone.

“The distribution of knowledge is the key contemporary task,” Mockus said. “Knowledge empowers people. If people know the rules and are sensitized by art, humour, and creativity, they are much more likely to accept change.” This is what he did. He used creativity and humour to influence people. 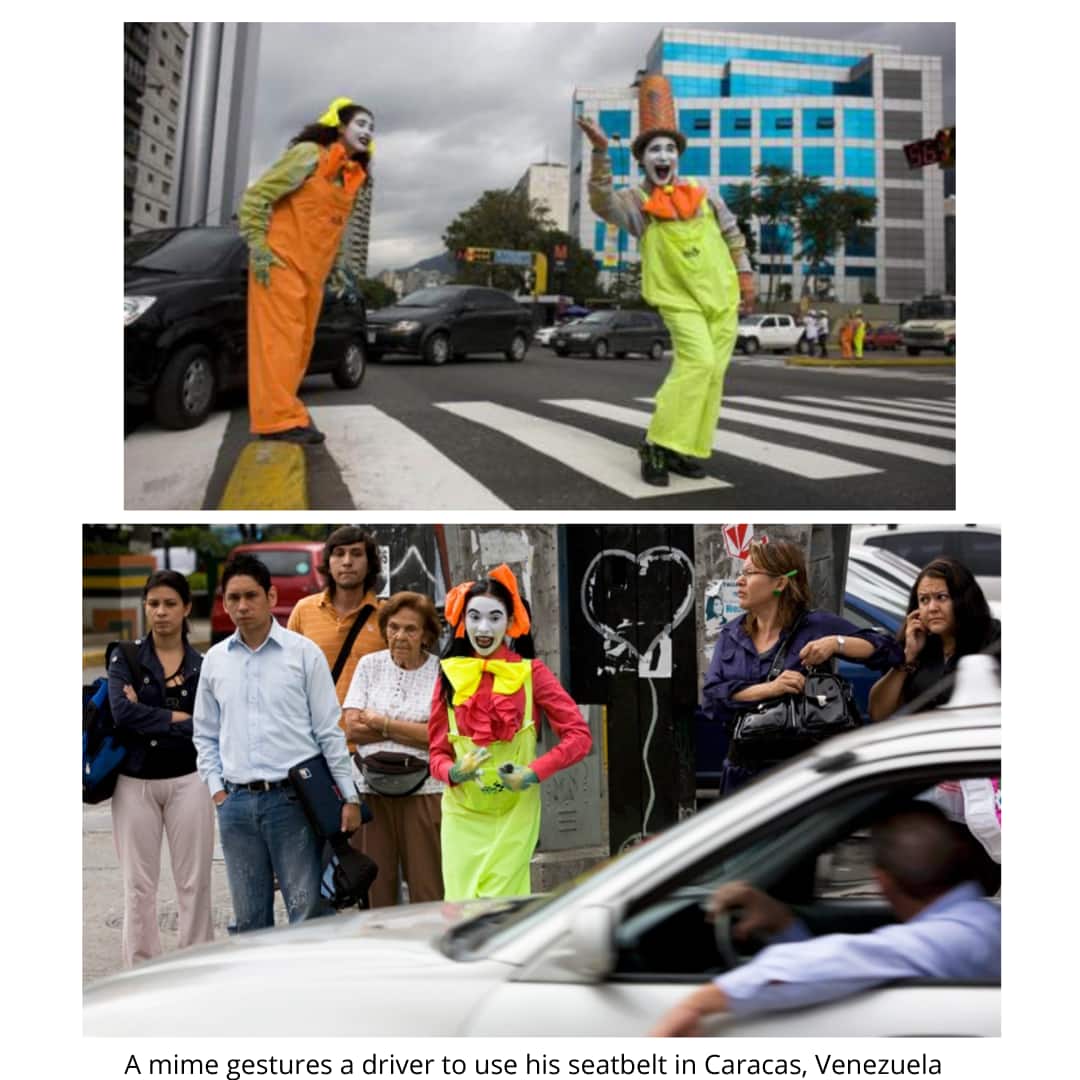 When there was a water shortage, Mockus appeared on TV, taking a shower and turning off the water as he soaped, asking his fellow citizens to do the same.

In just two months people were using 14 percent less water, a saving that increased when people realised how much money they were also saving because of economic incentives approved by Mockus—water use is now 40 percent lower than before the shortage.

Mockus writes in his note, “When the city faced a critical water shortage, I made a public commitment: There would be no traditional rationing to manage the crisis, no cutting of supply. Instead, we set a goal of voluntary conservation of 12 to 20 percent; ultimately we achieved savings of 8 to 16 percent. To inform people of this policy, we replaced the busy signal on people’s telephones with a public message, either in my voice or that of the Colombian pop star Shakira, saying, ‘Thank you for saving water’.”

This sounds familiar. We had Amitabh Bachchan’s voice reminding us to wear a mask and maintain social distancing to fight coronavirus. Now, some messages talk about the safety of vaccines. Governments, both at the Centre and in states, were quick to inform people about the pandemic. Even before the announcement of the lockdown, Mumbai had billboards with a message of safety.

In behavioural economics, you design a nudge to bring a change in the behaviour of people. As a project leader, a marketing head or the cultural captain of your company, you can design nudges that bring the right behavioural change to the organisation or customers.

You can create a form where someone has to opt out instead of opting in to get more signatures. The UK government used this to make people adopt pension funds. They saw an increase in sign up of pension funds when the default setting of the form was opt in. It was an effort for people to opt out.

Marketers of most websites use this as a marketing tool. You may have noticed that when you register on a site, it has a tick mark about receiving promotional material, you are given the option to opt out of it. Similarly, you can design a change in communication and keep it EAST - easy, attractive, social and timely to make it effective.

The thought that I want to leave you with is what do you do when you want to change your behaviour? The article will continue next week with more examples on behavioural economics and ways to bring those ideas into our own lives.