Large organisations create teams to address the problem of entropy. But there are processes that bind all teams into a large one—making a big room full of Lego blocks. That’s why startups are agile. They are the small rooms of fewer Lego blocks.

She barged into the room screaming “entropy, entropy”. What my 8-year-old niece meant was the Lego chaos her toddler brother had created in the other room. The niece, in trying to prove herself smart, as most children do, was showing off what some of us adults had discussed earlier in the day about physics and the second law of thermodynamics. Her takeaway was a new word for chaos and that is entropy.

Children have the gift of simplifying things in just one stroke. Probably because their mind is less cluttered and they have more actionable energy than us adults, who have multiple things on our minds, filling up garbage bags of chaos and clutter.

A glance at notes from my previous articles:

Disorder is best explained by science. It is called entropy. Entropy in simple terms is the measure of disorder. More the disorder in a system, more the entropy.

“The second law of thermodynamics states that “as one goes forward in time, the net entropy (degree of disorder) of any isolated or closed system will always increase.”

I don't like the word entropy. I don't like the sound of it, as it has a negative connotation to it. The mark of disorder. If you say chaos or disorder, it rings the bell of chaos but when you say entropy, even if it is age old, you do not grasp it immediately. Imagine screaming in a boardroom meeting, the reason for the failure of a project is entropy. Who would relate to it? Very few or maybe none. Now you know why I do not like the way this word is in our lives.

Entropy is the elephant in the room, the problem that exists but is not acknowledged or is ignored. We learnt in a previous article that there are three principles to remember:

i) Entropy is the default state

ii) It tends to increase when the system is closed

iii) Higher the entropy in a system, the more energy is needed to be efficient. Imagine more Lego chaos and more time to clean up.

In today’s habits for thinking, I am bringing to your attention Lego and lessons it offers in keep entropy in check.

Lego is a brand name for small building blocks that come in various shapes and sizes. For toddlers, the Danish company makes larger blocks and for older children and adults, it gets into smaller, specific details, including Mindstorms that are programmable robotic constructions.

Possibilities are endless and so are the types of Lego bricks that a child can possess. Even a small collection of Lego models is big enough to bring disorder to a room, just like entropy.

Our lives are like that—small pieces of building blocks that come together and make a nice picture. Relationships, work, purpose, etc are the building blocks for the mind, while food, sleep and exercise are for the body.

Like Lego blocks, they manage to sit together to create a unified model. You remove one or two pieces and there is disorder. You scatter them, like a room full of building blocks, and wish you could scream entropy, entropy.

There is only one difference when Lego blocks are scattered and create a mess, they can be brought together and fixed to another model. In life, when entropy or disorder increases, there may not be any turning back.

The more the number of Lego blocks, the more disorder they create and will require more energy to put it together. In large organisations, several processes are designed to keep the organisation efficient.

Just tackling the processes can increase a delay in decision-making, leading to disorder. Large organisations also tend to cater more to internal processes by which they move towards a closed system. And, like in any closed system, entropy increases, slowing the organisation down. But Lego bricks and building blocks have magical power. They bring excitement. Bright and colourful, they fuel imagination and dreams. There are lessons to be learnt from these building blocks that can help us keep entropy in check.

1 It starts with a goal

Have you ever played with a box of Lego building blocks? While you can use Lego bricks independently, they are sold as a collection of blocks to make a car, a tower, a city, etc. So when a child starts making it, they already have a goal in their mind.

If we take this approach to handling entropy, it will help in keeping it contained, just like the way you need to work on a stable relationship with your partner. If two partners are stable but barely communicate, they are passive in their state of being in the relationship. This passive state can cause disorder too.

So you know, to keep a happy, active relationship, you need to communicate and pay attention. It is easier to associate a goal or success factor in relationships but difficult to see it in a project.

#ideastoaction: Start with a vision of success and work accordingly. It will keep entropy in check.

That is the beauty of Lego bricks. The blocks are designed in such a manner that you can use the bricks in different ways and models. These are not unique to one design.

Our life’s building blocks are like that too. A colleague at work is going through a rough patch and you take them out for a meal and talk it out. You have merged your own building blocks of food, work and relationship. Lego teaches us that. To merge, to interuse, to be constructive before entropy goes beyond control.

It works with self-growth too. Researchers and psychologists have identified a correlation between entropy and mental health. As entropy increases in the mind, so does the disorder in life. One way to tackle this is to build several mental models.

A closed mind has an increased level of entropy and therefore a diminished ability to make decisions. A growth mindset or an open mind is better at decision-making. This is because a growth mindset learns several mental models. These mental models, like Lego blocks, are interchangeable, used in multiple ways thus keeping an active mind.

Steve Jobs gave a famous term to this concept—“connect the dots”. You learn a mental model at work and you apply it in your personal life. That's the magic, like Lego blocks. You can be a free learner or you can use frameworks from courses to learn. Like you can build a model on your own or you can build a colosseum that Lego provides.

Lego is more fun if you do it with others—friends or siblings. Keeping entropy at lower, manageable levels is not a fun thing to do. As discussed earlier, it is the elephant in the room. It is easier to address the elephant if you have more people on your side.

Large organisations create teams to address this need. Still, there are processes that bind all teams back into a large one— making a big room full of Lego blocks. That’s why startups are agile. They are the small rooms of fewer Lego blocks. 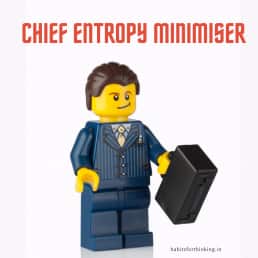 If there was a job like Chief Entropy Minimiser, their job description would be to paint the vision of success or goals before the onset of projects, lead teams to use interchangeable mental models and collaborate with other entropy minimisers to keep an agile, constructive, venture. Collaborate, make others responsible too to keep the company agile.

#ideastoaction: Make others conscious of entropy and the impact. Work together to keep entropy in check.

The name Lego is derived from the Danish phrase leg godt, which means play well. Entropy is the default state of life. At work, in life, just Lego it. Just play well.