Upcoming Event:Join us for the exciting discussion with Danone on role of nutrition, protein in working professionals’ quality of life on July 31, 3pm.
you are here: HomeNewsTrendsEntertainment

According to an information on Lumen database, Twitter received legal request from the Indian government on June 6 for actioning four accounts, including that of JazzyB.

Twitter has blocked Canadian-Punjabi singer Jazzy B's account on a request made by the Indian government. This came after his frequent tweets in support of the farmer's protest at the Singhu border. Last year in December,  he also visited the national capital to support thousands of farmers protesting against the new farm laws.

According to information on the Lumen database, Twitter received a legal request from the Indian government on June 6 for actioning four accounts, including that of JazzyB. The other three accounts that have been suspended are hip-hop artist L-Fresh the Lion, California Sikh Youth Alliance, and @Tarande61695394.

Requests received by Twitter for withholding content are published on the Lumen database which is an independent research project studying cease and desist letters concerning online content.

"If the content violates Twitter's Rules, the content will be removed from the service. In all cases, we notify the account holder directly so they're aware that we've received a legal order pertaining to the account," the spokesperson said. 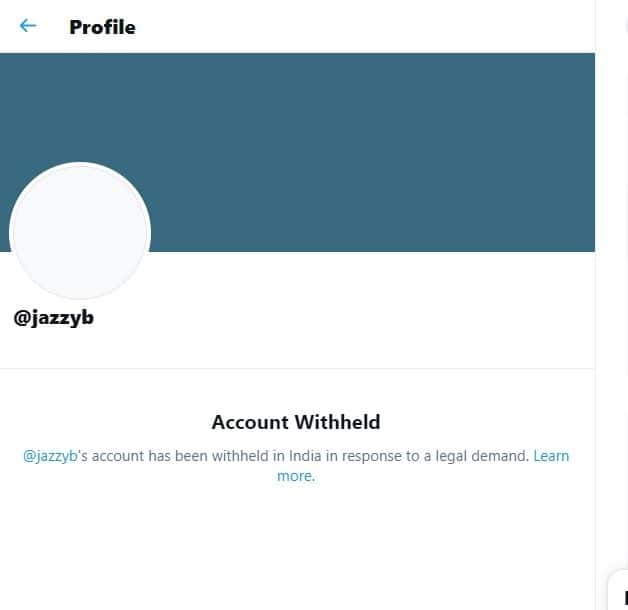 Jazzy B also confirmed the report on his official Instagram handle.

Sharing a screenshot of the 'account withheld' page, he wrote, "I will always stand for the rights of my people #kisanmajdooriktazindabad #neverforget1984 #raiseyourvoice."

In the following Insta post, he added, "Waheguru Ji I don’t fear physical death, but when my conscience dies, that is real death #neverforget1984 #kisanmajdooriktazindabad."

Social media platform Twitter on June 7 seeked more time to comply with the new IT rules of the Indian government.

The response from Twitter comes after the government, last week, issued a strongly-worded final notice to the company regarding its non-compliance with the new rules. When contacted, a Twitter spokesperson said Twitter has been and remains deeply committed to India, and serving the vital public conversation taking place on the service.