OTTs are ramping up content, ZEE5 partners with The Viral Fever to drive subscribers

Over the top (OTT) platforms are investing in new content, hoping to carry forward their success last year when the greater variety of their content prompted 1 crore Indians to shift from traditional TV broadcasts to video streaming on the internet

Video streaming platforms are ramping up their content portfolio this year, with over the top (OTT) platforms expected to launch more than 400 originals in India this year, a big jump from less than 200 titles in 2020.

Media company Zee Entertainment's over the top platform ZEE5 is also upping its content game and for this it has joined hands with The Viral Fever (TVF), a digital entertainment network.

Behind the paywall, the OTT will offer a line-up of new seasons of popular TVF shows including Pitchers Season 2, Tripling Season 3, Humorously Yours Season 3, and other popular titles like Engineering Girls Season 2, The Aam Aadmi Family Season 4.

On the advertising video on demand (AVOD) side, it is adding 13 TVF shows for which the platform is seeing advertising interest.

"Because it's TVF, some male brands are interested. Regular FMCG are also keen. There are discussions in sponsorship on a long-term basis. There are three sponsors which are there and then we will sell regular ad inventory," Manish Kalra, Chief Business Officer, ZEE5 India told Moneycontrol.

Along with TVF content, ZEE5 has a line-up of 50 theatricals through the year and 40 web series across four to five languages.

While ZEE5 is upping its content game, other top OTT players are also offering more originals to Indian viewers.

American OTT Netflix has plans to offer 40 originals this year including shows like Jamtara, Delhi Crime, movies like Raveena Tandon-starrer Aranyak, among others.

Another OTT giant Amazon Prime Video which this year launched its mobile pack for the Indian market started 2021 with Saif Ali Khan-starrer web series Tandav. Platform's India Director and Country General Manager Gaurav Gandhi earlier this year had said that the OTT has 30 shows in production and over 50 in development.

Karan Taurani, analyst and Vice President at Elara Capital, in a research note had pointed out that SonyLIV saw 5x growth in terms of viewership, more users post the launch of the 2020 web series Scam 1992 starring Pratik Gandhi. 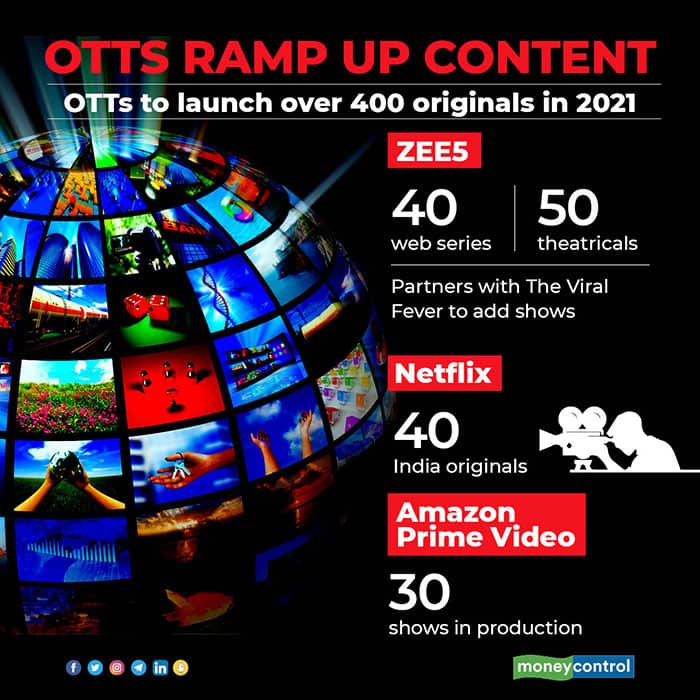 However, when it comes to ZEE5's partnership with TVF for new content, Shailesh Kapoor, CEO, Ormax Media, a media consulting firm, said, "TVF has been producing content for other platforms too, such as Panchayat and Hostel Daze for Amazon Prime Video, and Gullak (two seasons) for SonyLIV. Hence, the presence of TVF shows may not be a differentiator for a platform, but it definitely increases their (ZEE5) chances of getting a hit show."

He said among the TVF shows that ZEE5 will be offering Pitchers Season 2 has been a highly-anticipated property. "Its return will definitely attract new subscribers to the platform it comes on."

ZEE5 currently has 72.6 million monthly active users (MAUs) and 6.1 million daily active users (DAUs). It is estimated that Zee5 has around four to five million subscribers, which is in the same range as Netflix in India in terms of paid users.

Talking about subscriber growth, Kalra said, "We want to grow userbase by 3x by end of next year. What happens with subscription is that when you launch a content you get users month-on-month."

And in terms of exclusive content from the new partnership, Kalra said the launch would start from October.

"There's lull in the shoot period (due to COVID-19 led-lockdown). Hence, it's (new show launches) slightly delayed," he added.

While content production has been challenging for OTTs just like TV and films due to lockdown, streaming platforms have been able to get significant number of users on board.

According to an EY 2021 report, 29 million subscribers paid for 53 million OTT video subscriptions in 2020.

This is why OTTs have been increasing their spends on content.

Even Kalra said that ZEE5 has made significant investment to add TVF content on its platform. However, he did not reveal any investment numbers.

He said that they are investing in TVF content because the new content is good fit for ZEE5 users and it will also help in trial generation for its content behind paywall.

While subscriber growth that ZEE5 will see after new content addition only time will tell, OTTs during the lockdown last year were able to shift around one crore Indians from TV, largely due to a greater content variety.

And experts say that it would not be surprising if more Indians shift completely to digital this year considering the continued focus of OTTs on originals and regional content.
Maryam Farooqui
Tags: #Entertainment #trends
first published: Jun 14, 2021 05:54 pm