Competition from streaming platforms and pre-Covid content have an impact on the box-office collections of Kumar’s movies this year.

This year has turned out to be the worst experienced in over a decade by Bollywood actor Akshay Kumar, who delivered four consecutive box-office duds in 2022.

Choosing quantity over quality, outdated content, dwindling star power and overexposure in theatres and over-the-top (OTT) platforms are some of the reasons why the star known as the Khiladi of Bollywood was unable to deliver a single success this year, exhibitors and analysts say.

"This year content was not good. Akshay Kumar who used to find good content and do films is now releasing films back to back. When you do too many films, it’s difficult to provide quality movies and you are over-exposed with weak stories," said Brijesh Tandon, a film distributor. Single screen exhibitor Vishek Chauhan noted that the primary reason for Akshay Kumar films not working in theatres is that the content was pre-pandemic.

OTT consumption has exposed audience to a variety of content from across languages which has led to viewers wanting new and good content, said producer and film business expert, Girish Johar.

"When Akshay Kumar's films released this year which was pre-COVID content, it did not click with the audience. Other Bollywood stars also faced similar issue.

Old content, combined with changing consumption patterns, has led to a slow recovery in Bollywood's box-office business. Hindi films’ box-office's revenue is estimated to be 25 percent lower versus pre-COVID levels and is expected to see 80-85 percent recovery by the end of FY23, according to analysts.

In addition, OTTs are giving theatrical releases tough competition because of the amount of content streaming platforms are providing viewers, said Tandon.

"Earlier, anything worked in theatres but that's not the case anymore."

There is no star mystique anymore, experts said. Overexposure with back-to- back releases in theatres as well OTTs is also hurting Kumar's box office draw.

Unlike other big Bollywood stars, Akshay Kumar is more often seen on streaming platforms with direct-to-digital releases like Laxmii and Cuttputlli that may have had some impact on the box office performance of his theatrical releases, said Johar.

"(Direct) OTT releases do have an impact because one can watch a big star on OTT at a cost-effective price. However, stars like Kartik Aaryan who had direct-to- digital releases like Dhamaka and Freddy have delivered both on OTT and at the box-office. But the situation does become tough because actors need to be careful with what they deliver on the big screen as it has to be real value for money."

At a press conference to promote his film Cuttputlli, which released directly on the streaming platform Disney+Hotstar, Kumar said that if his films are not working, it is his fault.

"I have to understand what the audience wants. I want to make changes, I want to dismantle my way of working and think about what kind of films I should be doing," Kumar had said.

A message sent to Kumar did not elicit a response.

Stars in a soup

Chauhan said not only Akshay Kumar but other Bollywood stars including Hrithik Roshan, Ranveer Singh and Varun Dhawan did not enjoy box-office success this year with their ventures Vikram Vedha, Jayeshbhai Jordaar and Bhediya and need to revisit their content strategy.

"Drishyam 2 is working not because of Ajay Devgn but because it is an established franchise. This is the post-COVID reality. Ayushmann Khurrana used to record strong collections, but today his producers don't want to give films to single screens because a film like An Action Hero (Khurrana's new release) doesn't work in single screens. Same is the case with Varun Dhawan and Akshay Kumar," he added.

The exhibitor said that until and unless these stars guarantee audience entertainment on the big screen, people are ready to wait and watch films on OTT.

"Stars are just characters now. Earlier, just a star would attract people to theatres but that's not the case anymore. They (stars) have to assure audience that a film is worth their time," Chauhan said.

Gautam Jain, a partner at Ormax Media, a media consulting firm, said recent Akshay Kumar films had not worked theatrically due to the content not being liked by the audience. His last four films had a low OPR (Ormax Power Rating) of below 60.

Ormax Power Rating (OPR) is a score on a scale of 0-100 that represents how much a film is liked by its viewers.

Jain said if this is compared with film releases from 2019 onwards, most of them were above 60, indicating the audience liked the content.

Chauhan pointed out that 2019 was Akshay Kumar's best year, when he had four successful releases and the cumulative box office collection of his films was around Rs 750 crore in the year. 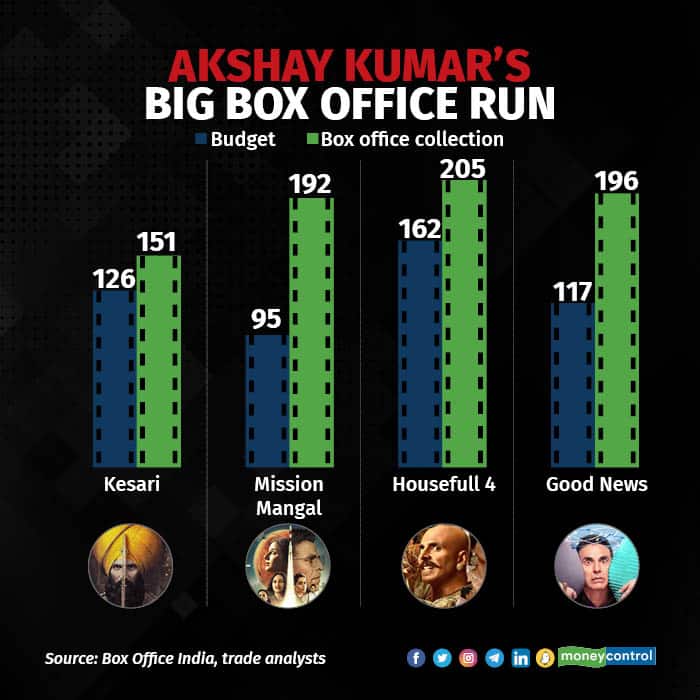 "This was unheard of and it was a phenomenal feat but everything changed post COVID. Except Sooryavanshi (released in 2021), nothing has worked for him."

He said Bachchan Pandey had the chance of doing well at the box office but that week, the release of The Kashmir Files and then RRR hitting theatres the week after led to limited footfalls for the Akshay Kumar-starrer.

A trade analyst on Twitter had also written that a mob in Bhubaneshwar had stopped the screening of Bachchan Pandey and had demanded screening of The Kashmir Files on every screen.

While 2022 was a rough year for Kumar, exhibitors and analyst said the star cannot be yet written off. "He is a huge star and one good film will turn the tide at the box office," said Johar.

Before the pandemic, he was the darling of exhibitors, he added. "He (Akshay Kumar) used to come 3-4 times a year and he usually did family films, which for theatre owners meant an average of four tickets for a particular film. He made movie watching in theatres a habit for audiences and made them come back to theatres."

"Hope he has green-lighted projects that are different from his 2022 releases because he has was bitten by the pandemic bug. The films he is green-lighting now need to be ahead of the curve," said Johar.