Gangubai Kathiawadi review: Alia Bhatt is a powerhouse in this bedazzling film

After 25 years of perfecting his signature style, Sanjay Leela Bhansali takes it a notch further in ‘Gangubai Kathiawadi’, a spellbinding exercise in gorgeous grime.

Alia Bhatt in 'Gangubai Kathiawadi', which released in theatres on February 25, 2022. Bhatt has been on a steady rise as a star over the last decade and this is one of her most challenging roles.

Sanjay Leela Bhansali has been making films for 25 years. And like the nine films that preceded it, his new work Gangubai Kathiawadi, releasing in theatres on February 25, is magnificent bedazzlement. A sensual ravishment. But unlike all the earlier ones, there is something different in the way he has imagined his eponymous protagonist in this film. Gangubai is a character from the peripheries of his own childhood. Bhansali has said in interviews that while he was growing up in Bombay (Mumbai) in the 1960s, his parents would walk him to school through Kamathipura, the city’s historic red light district. In that age, and many years following it, some of Mumbai’s famous gangsters have protected the brothel didis of Kamathipura—in this case, Karim Lala. This is Bhansali’s ode to the 1950s, to a protagonist cured in the process of bearing and surmounting pain, to the margins of a sex worker’s life always meant to be shunned and invisible, and to the throbbing sensorium of Kamathipura.

Bhansali remains Bollywood’s most staunchly devoted fantasist or pictorialist. The sprawling canvas in stories that revolve largely around romance, tragedy and suffering, and the beauty that emerges from it, is beginning to acquire relicdom. But as this film proves, Bhansali is in no mood to adapt. He has never left much of his grand templates to be executed to chance—like most of his films, here too he co-writes, directs, edits and composes the music. And he really pushes the limits of his signature forward. But the singularity in his storytelling in Gangubai Kathiawadi fructifies perhaps because of his own nostalgic link to the story, and to Gangubai, who was a hero of sorts in Kamathipura. In that sense, this is his most personal film.

The defiantly unrealistic and aesthetically overwrought language has gritty, grimy contours. The lack of a sinewy script and eliminating the criminal bent of his lead character’s life—Gangubai’s contribution to gangster-led violence and drug trafficking in Kamathipura do not get screen time; the drugs are replaced by local liquor—does not come in the way of the sublime beauty on offer. His attention to filmmaking details is spellbinding; the architecture and eroticism of Kamathipura and its brutalised but fiery and resilient women are stunningly dilated by the visual language and the lead performance by Alia Bhatt. The thin and thick wedges of Kamathipura life in the 1950s come alive through this electric woman—a sex worker, a woman’s woman, activist and feminist, poetically propped up to be the vehicle of a courage and brazenness that can only emerge from vulnerability. 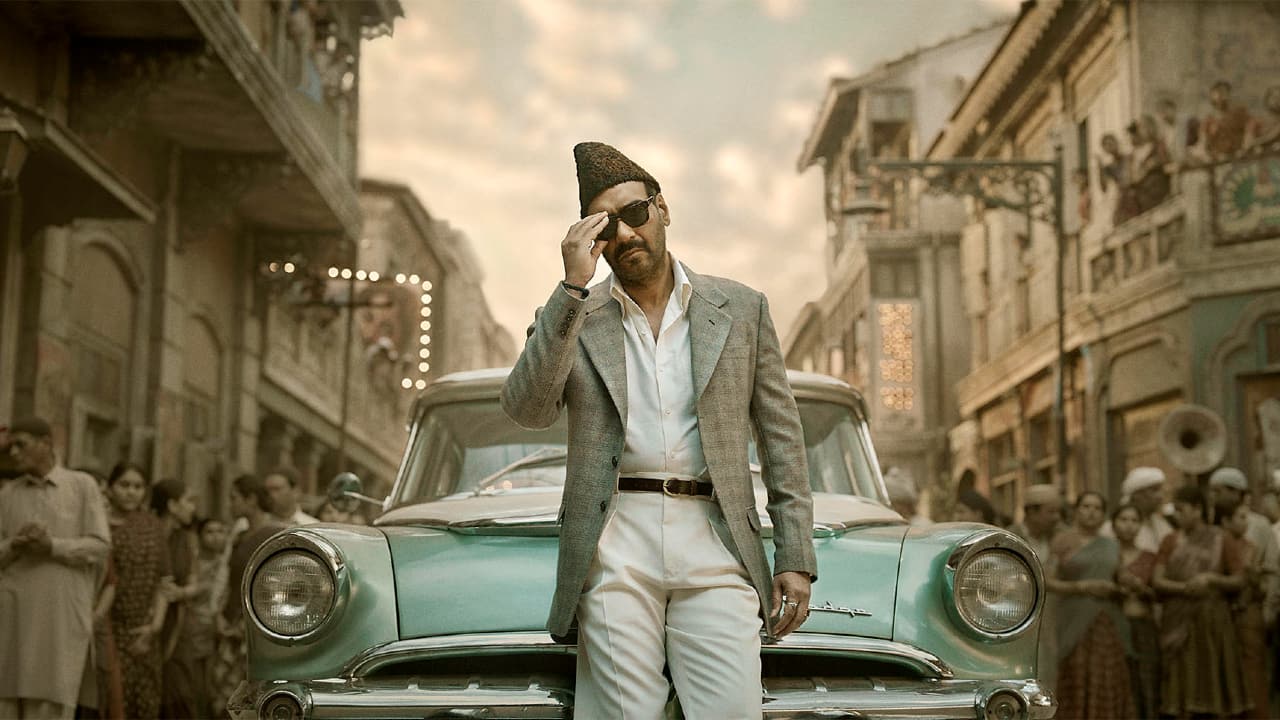 We meet Ganga, the teenage daughter of a barrister in Kathiawad, Gujarat, during Navratri. It’s a classic Bhansali touch—dancing as the camera of cinematographer Sudeep Chatterjee captures her ghagra’s dizzying swirls. Many of his memorable heroines dance with vigorous abandon before their lives and spirits take a Dostoyevskian beating, which is then uplifted from the darkness to be imbued with exotic beauty and valour. Ganga’s boyfriend takes her on a steam engine train to Bombay with the lure of making her an actress opposite the reigning superstar, Dev Anand, and sells her for a thousand bucks to a brothel owner “mausi” (Seema Pahwa). Ganga becomes Gangu. After a series of brutal encounters as a teenage sex worker, Ganga decides to change her destiny. Thrumming with a disdainful, implosive anger, and the ambition and desire to reclaim her dignity, she becomes the irascible Gangubai, who usurps the brothel owner’s power with the help of the reigning gangster of the area, Karim Lala (Ajay Devgn), and succeeds her as the owner after her death. Gangubai contests the election to be Kamathipura’s new leader, threatening its long-time leader, a eunuch named Razia Bai (Vijay Raaz), and even gets to articulate and fight for the rights of Kamathipura’s women by hustling with politicians and gaining the trust of a journalist (Jim Sarbh).

In Bhansali’s imagination, Gangubai is a fiery messiah. Towards the end of the film, her glorification—bordering, true to his grain, on exoticisation—becomes grating. Yet, it is easy to dismiss that excess because the portrait of Gangubai has such terrific pitch and such outrageous energy, deriving from that combination of mawkishness and realism.

It helps that in the lead role, Bhatt is a powerhouse. Bhansali is the only big Bollywood director now who is seriously and artistically invested in women protagonists. He knows how to use stars to translate his imaginings of the world of women—as treacly as that may be. Gangubai is the most grainy, yet most defiant, wily and dynamic Bhansali heroine. Bhatt has been on a steady rise as a star over the last decade and this is one of her most challenging roles. If her director is the bearer as well as midwife of this portrait, Bhatt is the talent that delivers it with great immersive force. Her trademark in this role is a suffusion of white, red and black—in costumes and accessories. In the overall visual template, white is like a romantic hue over the isolated world of Kamathipura. The dialogues (by Prakash Kapadia and Utkarshini Vashishtha) have wit, snap and emotional heft and yet meant to be for classic Bollywood-style dialoguebaazi—like the rest of the elements of the film, the dialogues are balanced perfectly on the cusp of realism and Bollywood schtick.

He is only director I have worked with who can so lucidly articulate me an entire feel, texture and emotion of a place and the people in it without giving me all the specifics.
- Cinematographer Sudeep Chatterjee on working with Sanjay Leela Bhansali
Bhansali’s cinema is commercially behemothic—his budgets run up to several crores; Gangubai Kathiawadi has been made with a reported budget of Rs 55 crore. Yet, Bhansali is an outlier in the democratised streaming universe. He has said before that K. Asif’s magnum opus Mughal-E-Azam (1960) is his perennial inspiration. He is the best kind of fantasist, in the modern Hollywood tradition of “Red Curtain Cinema”.

(The Red Curtain Trilogy is a DVD box set, released in 2002, of the first three films directed by Hollywood’s audacious fantasist and musical cinema virtuoso Baz Luhrman. The term, coined solipsistically by Luhrman himself, it is a loose term for the cinema of exaggeration, the primary focus of which is to entertain, enchant and stimulate the audience rather than depict everyday reality. By using music, dance, painterly palettes of detailed settings and costumes to accompany the dramatic story, “Red Curtain Cinema” stimulates senses and intensify the movie experience to a degree that makes viewers acutely aware of the artificiality and artistry involved.) Sometimes, as in Gangubai Khathiawadi, Bhansali, takes a book, or a strain or story from a book and distills and magnifies a character or characters through his imagination. In Black (2005), it was the teaching of the blind and deaf Helen Keller in The Miracle Worker; the kernel of Saawariya (2005) is Dostoevsky’s White Nights; here it is a chapter from Mafia Queens of Mumbai by Hussain Zaidi.

There is a methodic madness to the way Bhansali immerses in the kinetics of a character and a setting. Sudeep Chatterjee, who shoots the gorgeous grime of Gangubai Kathiawadi with painful attention to details, says, it can be an exhausting process to up the game at every stage of filming a Bhansali world, but every time, it is an opportunity to grow. Chatterjee told me before the release of the film, “There is no inflexible rule with him, he is open to ideas but for a long period of time, often several months, he develops his vision and he is only director I have worked with who can so lucidly articulate me an entire feel, texture and emotion of a place and the people in it without giving me all the specifics. The details keep developing as we go along.” In Gangubai Kathiawadi, Chatterjee was asked to bring alive 1950s’ and 1960s’ Kamathipura, not just with period details of architecture (the art design by Subroto Chakraborty and Amit Roy is intricate and grand at the same time), but to treat it with the endearing nostalgia that the director associates it with. He is known to be fastidious and to spend hours and days perfecting a shot. It is a testament to his commercial acumen that producers are willing to put their money on his work because none of his recent films have had mediocre or weak box office openings. He is the ultimate heroine’s director—few directors in India can imagine the lives of beautiful, plucky, difficult women and exaggerate their power to such treacly, and at the same time, poetic effect.

Every cinematic element in Gangubai Kathiawadi, including the performances—Raaz’s screen presence and interpretation of the eunuch Razia Bai is memorable; Devgn is effective as a benevolent testosterone bomb; Seema Pahwa embodies the hardened survival instincts of a brothel owner with gusto—coalesces for the film’s mesmerising effect. Even when some scenes border on the farcical, Gangubai Kathiawadi rides out on its spectacular visual brio. It is a gift that the film comes to theatres at this time, because no streaming monitor can do justice to Bhansali’s vision other than the big blazing screen. Hurrah Netflix, long live cinema.