'DDLJ': As 'Pathaan' hits the theatres, SRK’s longest-screened movie continues to get love

With every new Shah Rukh Khan film, the love for the old grows deeper. Mumbai's Maratha Mandir stands testimony to that. The low-priced tickets of SRK's 28-year-old 'Dilwale Dulhania Le Jayenge' at the single-screen theatre still sells like hot cakes to the masses, attracting the post-DDLJ-era Gen Z.

It's been 28 years, but Simran (Kajol) still looks out of a window dreamily, and says, “Haan, aisa pehli baar hua hai satra athra saalon mein. Anjana ajnabi koi aane laga hai khayalo mein.” The audience knows what is coming next; they have seen it all before. And yet, just after this sequence, as the trumpet plays in the background and a young boy runs in the rain with a football tucked under his right arm, everyone in the cinema hall is up on their feet, hollering and hooting, dancing and whistling. It is 11.42 am. Raj, played by Shah Rukh Khan, has once again made his entry in the imposing hall of Maratha Mandir and in the hearts of Bollywood lovers. It is a daily affair. The King of Bollywood is to be seen in cinemas today onwards in the much-anticipated movie Pathaan. He will return to the big screen after four long and tardy years and fans cannot keep calm.

Dilwale Dulhania Le Jayenge, more commonly known as DDLJ, has been playing in Mumbai’s Maratha Mandir since its release in 1995. The single-screen cinema, one of the very few ones surviving in the city of Bollywood, takes in hundreds of DDLJ fans every day for the 11.30 am show. On a weekday, the audience easily crosses the mark of 150. On weekends, it surges up to 400-500. 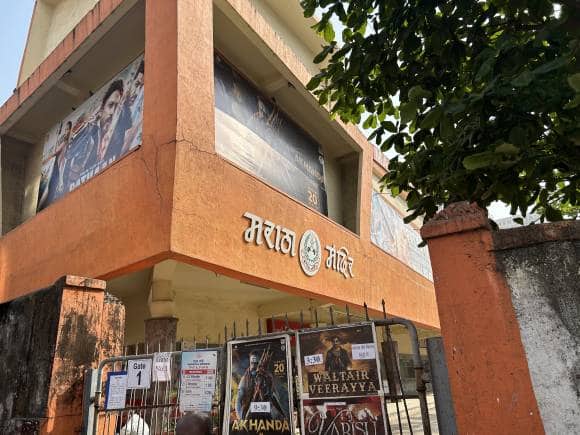 Maratha Mandir theatre in Mumbai has been playing 'DDLJ' since 1995. (Photo: Devanshi Doshi)

“Not once in the movie have Simran and Raj said I love you to each other. Still, it is a love story and it is successful,” says Jagjivan Maru, a projectionist with Maratha Mandir for the past 50 years, explaining the unusual demand behind the film. “In my opinion, this is a movie you take someone to if you want to confess your love to them.” Maru has also been the face behind every single screening of DDLJ in Maratha Mandir since 1995. He says he's unwilling to part with his "dulhania" and hence will not leave the cinema. “Does a dulhania leave from her sasural after being wedded? Never. Then how can I let my dulhania leave?” Jagjivan Maru at Maratha Mandir theatre in Mumbai, has been responsible for screening 'DDLJ' since 1995. (Photo: Devanshi Doshi)

His dulhania, however, was about to be taken away from him when the movie completed a thousand weeks of screening, setting a Guinness World Record. “We decided to show something else instead of the 11:30 am show,” recalled manager Manoj Pande. “So, we put up a two-week notice announcing the last day of DDLJ at Maratha Mandir. That’s when the phones started to ring.” And that was how the public demand became the reason why DDLJ continues to play at Maratha Mandir, and Maru continues to project it 28 years after its release.

A '90s movie will have more of a middle-aged audience, one would think. However, it will surprise one to see many youngsters aged between 18 and 25 — none born when the film had released — fill up rows of the worn-out, striking red seats.

“I have seen the movie many times before. My father is a big fan. He used to come here with his friends to watch the same movie,” says Mansi Kadam, 21, who was here for the first time with her friends, trying to relive one of her father’s fondest memories. Kadam, accompanied by Farhan Khan (21) and Arsh Ansari (22), was among the crowd of over 300 who had travelled from different parts of Mumbai on a Sunday morning to watch the movie.

“It (DDLJ) released when we were not even born. We still have the chance to see it in the cinemas today. No one knows how long it will continue to be screened. And obviously, we are SRK fans, so we’re here,” says Ansari. 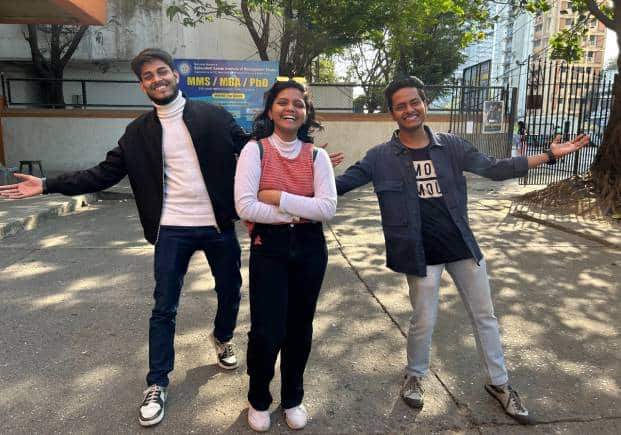 With a seating capacity of 1,107 (294 balcony seats and 813 in the stall), Maratha Mandir announces its grandiose structure the minute you pass through the security check. You step inside the gate and you have entered what you would think is the world of Bollywood. A huge dimly-lit hall with the food counter pushed to the left corner greets you immediately. Conical translucent glass chandeliers glow a soft gold as they hang from the ceiling. The wood-panelled walls pave way to the glass passage that leads a stairway up to the balcony area.

“I always knew it was an old theatre but I did not expect this. When I was climbing the stairs, it was building an atmosphere. I felt like I was going to watch a Bollywood award show,” says an amused 20-year-old Harsh Wardhan Saklecha. Saklecha, an outstation student studying at the NM College in Vile Parle, was never very fascinated by Bollywood. He was dragged to the theatre by his classmate Mrunamayee Agre who proudly claims to have watched the movie "at least a hundred times". 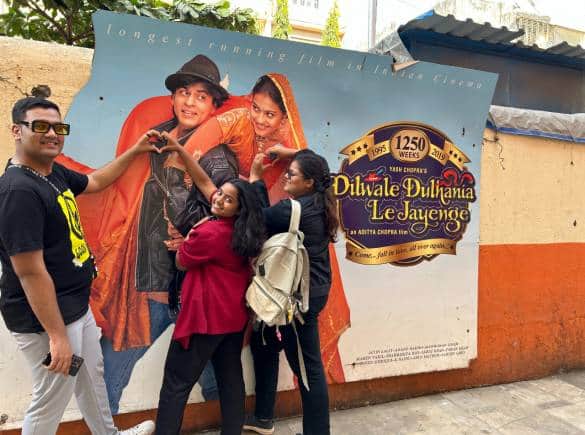 “I am a big Bollywood fan. This (going to Maratha Mandir for DDLJ) was in my bucket list,” says Agre, who is also not from Mumbai. She has always found comfort in the movies of the '90s. “When I watch movies made in the 2000s, I always wonder how it ends so soon. Abhi hi toh shuru hui thhi (It had just begun).”

The three-hour-long movie was hardly a concern with the impatient GenZ. “It’s a three-hour movie?!” exclaims 19-year-old Priyanshi Gupta. The movie had just ended. Gupta with her college friends had just exited the cinema hall from the back gate. “We didn’t even realise how time passed inside.”

Priced at Rs 40 and Rs 30 for balcony seats and the stall, the cost is what attracts the audience. “This is a 27-year-old movie,” says Pande, “No one will pay us more than this. So, there is a business mind here. It is because the price is so low that people come here often. So, instead of earning in one go, we earn the same amount on their fourth visit.” 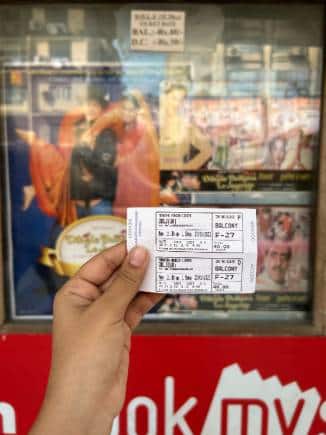 A paper ticket for 'DDLJ' in January 2023, at Maratha Mandir theatre in Mumbai. (Photo: Devanshi Doshi)

But the low-pricing is not limited to DDLJ. Tickets for Pathaan, SRK's newest film, at Maratha Mandir start at Rs 130 per ticket. This is because Maratha Mandir chooses to serve the masses, those who cannot go to multiplexes. Maratha Mandir and Gaiety Theatre, both owned by Manoj Desai, were also the only theatres in Mumbai that did not screen PK (2014) when it had released. The distributors wanted the theatres to set higher prices and, so, the two theatres chose to not have the movie at all. Pandey explains,  “Sir (Manoj Desai) did not want to harass the public. People who come here don’t come in Mercedes. They are artisans who have come here for entertainment after a long day.”

Pandey adds, “We start screening Pathaan on January 25 with the hope that SRK will prove lucky to us and give us his blessings just as he’s been doing all these years.”

The middle-aged people watch DDLJ for the nostalgia, young people watch it to tick it off their checklist. The undying love for SRK, however, is what bridges the gap. And also, well, the cost of the ticket.