Sharing the screenshot of a report, Alia Bhatt wrote on Instagram, " "This is 2022. Can we please get out of this archaic way of thinking? Now if you would excuse me, my shot is ready."

Alia Bhatt will star alongside Gal Gadot and Jamie Dornan in their new movie Heart of Stone.

Alia Bhatt has responded fiercely to reports suggesting that she will be taking a break from during her pregnancy. This comes a day after she and actor husband Ranbir Kapoor announced their first pregnancy.

Reacting to a report that also stated that Ranbir Kapoor may go to UK to bring her back to Mumbai, Alia Bhatt wrote in an Instagram story: "Meanwhile, in some people's heads, we still live in a patriarchal world. Nothing has gotten delayed! No one needs to PICK anyone up! I am a woman, not a parcel! I do not need to REST at all, but good to know you'll have a doctor's certification as well."

She further added, "This is 2022. Can we please get out of this archaic way of thinking? Now if you would excuse me, my shot is ready." 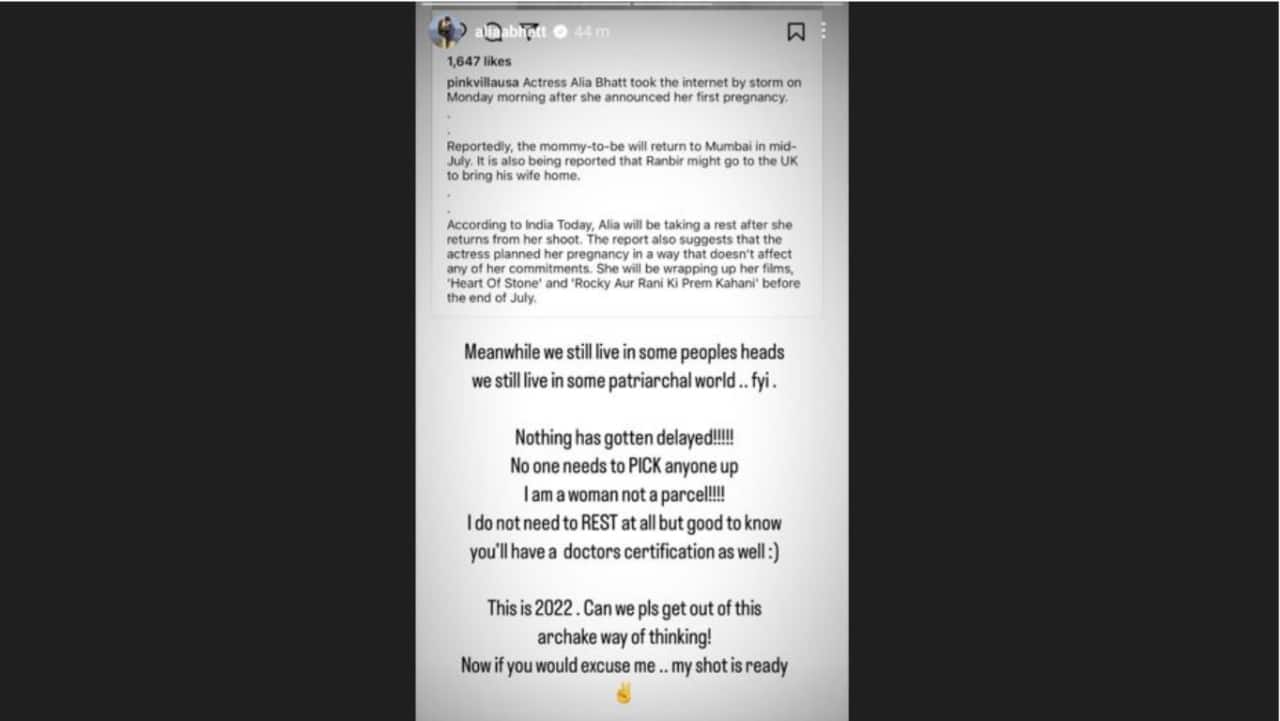 The actor had on June 27 taken to Instagram to share the news of her pregnancy. "Our baby coming soon" Alia Bhatt wrote , sharing a photo of her on a hospital bed, with Ranbir Kapoor by her side.

Their family and friends congratulated them on their big announcement.

Alia Bhatt and Ranbir Kapoor had tied the knot in April in an intimate ceremony in Mumbai. Their wedding was the subject of much fanfare.

Both of them are Bollywood's top-ranking actors.

Alia Bhatt had made her Bollywood debut with Student of the Year in 2012. She went on to deliver powerful roles in films like Highway, Raazi and Gangubai Kathiawadi, which premiered at the Berlin International Film Festival in February.

The couple are now awaiting the release of their first film together, Brahmastra.