The online edition of Ageless International Film Festival is backed by the South Asian community in Canada. The film festival wants society to care for and learn from the world's older adults.

A still from 'It Is Not Over Yet' (2021), the story of a small Danish nursing home for elderly people that focuses on care over medicine in a treatment inspired by Florence Nightingale. The film is being screened as part of the second edition of the Ageless International Film Festival, on from November 18-21, 2021.

"We have made so many advances in other areas - civil rights, gay rights - but ageism is still an area that is taboo, not talked about and not dealt with." These powerful words of singer-actor Madonna form the tag line of the Ageless International Film Festival, which opened its online 2021 edition on Friday.

Older adults, both on screen and behind the camera, are the focus of the four-day festival that has burst onto the scene to offer a ray of hope to the world's elderly population, hardest hit by the coronavirus pandemic.

"There are so many film festivals across the world, festivals for everybody on every subject. But not on older adults," says Ageless film festival co-founder Judy Gladstone. "This is our second edition and we want to use films to open a conversation and shine a spotlight on ageing and ageism," adds Gladstone, a well-known Canadian filmmaker.

"The registration and screenings are free. All you need to do is register and reserve a seat through our website (www.agelessfilmfestival.org)," Gladstone adds.

Founded in Toronto in the middle of the pandemic last year, the Ageless festival drew instant support from the sizeable South Asian community in Canada. Caring for elderly parents either living with them or mostly back home alone has been a massive challenge within the large Indian diaspora. There were two films directed by Indian-origin filmmaker Geeta Sondhi in the inaugural edition lineup.

"The Ageless festival is an extraordinary and timely festival that brings films exploring new territory about ageing to invested audiences who are ready to engage in all their complexity," says Sondhi, whose works include 100 And Counting (2016) about a couple who have been together for 80 years, and The Art of Downsizing (2020) about ties with things people accumulate over long years of their lives. "It was a privilege and an honour to have two of my films about ageing included in the inaugural year of the festival and to watch them resonate with audiences who were eager to speak about their own experiences after the screenings," adds Sondhi, a Canadian of South-Asian descent.

"It’s exciting to have the space to discuss issues of significance to ethnically diverse constituencies and to consider innovations around ageing from a variety of lived experiences and cultural points of view," says Sondhi. This year's festival is centred on two themes - the power of grandmothers and housing. All screenings are followed by live discussions.

This year, Vic Sarin, another Indian-origin filmmaker, is the guest of honour at the festival. “I find the true richness of living in the experience of life and the age that goes with it. It is a pity that filmmakers don’t exploit that immense treasure of stories through the lived lives of people," adds Sarin, whose documentary filmmaking spans five decades, including such films as Partition (2007) and A Shine of Rainbows (2009). Sarin will also be speaking at the festival.

This year's lineup includes the searing anti-war documentary, The Apology, by Canadian director Tiffany Hsiung, about three grandmothers in the Philippines fighting for justice and reconciliation while struggling to live with their past as "comfort women" during the Second World War, and the 2011 short film Abuelas, on the famous protests of grandmothers in Buenos Aires in 1977 to demand the return of their grandchildren stolen by the military junta.

Among other entries are It Is Not Over Yet (2021), the story of a small Danish nursing home for elderly people focusing on care over medicine in a treatment inspired by Florence Nightingale 150 years ago, and the 2018 documentary The Guardians by American director Billie Mintz on systemic abuse of older adults through a scheme that allowed corrupt court-appointed guardians to take total control over their healthcare and financial decisions in Las Vegas. 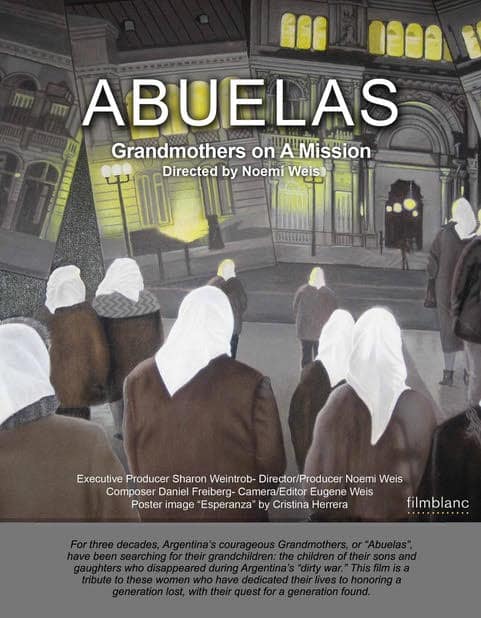 The debilitating effects of Covid-19 on the elderly population during the past 21 months or so has added an urgency to the debate on ageing. "The Covid-19 pandemic led to a ten-fold increase in gender-based violence towards older women, elder abuse, mistreatment and neglect and has been referred to as the 'shadow pandemic'," says Dr Raza Mirza, Senior Research Associate at the University of Toronto's Institute for Life Course and Ageing.

According to Dr Mirza, the move to online and virtual platforms for education, healthcare and even for recreation and leisure programmes and services left many older adults behind. "Age became another dimension of inequality in the digital world where digital equity was a challenge for older adults, who did not have access to the hardware or software or the tech literacy to stay connected," he says.

Recent studies say individuals with dementia are at greater risk of death associated with Covid-19. There is an increased likelihood of anxiety, depression, stress and insomnia in the older adult population during the pandemic while social isolation has impacted older adults.

"We want younger people to watch the films and join in the conversation on ageing and ageism," says Gladstone, who joined the Montreal-born Sylvia Lustgarten, a nonagenarian philanthropist, to launch the Ageless film festival last year. "Sylvia was 93 then and wanted to do something to bring attention to the discrimination against older adults," says Gladstone about her fellow festival co-founder.

"I haven't always been 95 years old. When I was young I wonder my attitude towards older people wasn't very great. I had a feeling they were 'has-beens' and when I got older I had the same problems with my children and I began to see how older people were treated as somewhat second-rate," says Lustgarten.

"This has come to a real crisis we are living now through the pandemic. The society has to change the approach to this whole spectrum of old age to bring more energy and creativity into the community and to reduce the abuse of the older people," says Lustgarten. "There needs to be a movement to understand the older persons in a deeper way than we have tried to do before and film is a language that speaks most profoundly to us to see in depth the lives of the older persons."
Faizal Khan is an independent journalist who writes on art.
Tags: #ageism #Ageless International Film Festival #Elderly population #film festival
first published: Nov 20, 2021 04:45 pm