Through art, dance and her Conflictorium Museum, Avni Sethi has created a space to bring up difficult subjects of conflict, violence and democracy.

Conflict and strife are inevitable aspects of human life. To navigate this difficult subject, interdisciplinary artist and Kathak dancer Avni Sethi founded the Conflictorium Museum in Ahmedabad in 2013, over a decade after the city saw one of the worst communal riots in modern Indian history.

“We are not going to manage a conflict-free society and that’s probably not even the point. Conflict is sign of a living culture, that we’re breathing and thinking and making, and therefore there will be conflict,” the young activist said at eShe’s recent Indo-Pak Peace Summit Led by Women, where she was a panelist.

“But as a culture, region and as a people, it’s a good time to think whether we are equipped with conflict resolution. If there is conflict, can we talk through our conflict? Or make art or dance through it? Can we do these things and not choose the route of violence, which is the easiest way and the way we have chosen for years on end?” she added.

For Avni, who grew up in Ahmedabad in a Punjabi-Gujarati household, conflict was personal. One set of her grandparents had migrated to Delhi during Partition and had to constantly pull through insecurity and crises. The other had lived in Gujarat for generations.

Avni spent most of her childhood navigating through these differences, in deciding ‘what to say, where’. “When you are a dual-culture child, always dealing with this subtle conflict present at home and in your extended family, you become more careful. You don’t want to say anything that gets you into trouble. And so, I resorted to silence while growing up.”

This lack of interaction led six-year-old Avni to explore different artforms to communicate. “I did a lot of craft. I would embroider, or fold paper, but never used language very well. It’s not where I lived, even if it was the most easily understood code to deliver an idea,” she says.

During this time, what was also nurturing in the background was her relationship with dance. “In India, unfortunately, the pedagogical mode of dance training includes a lot of comparisons and body shaming. So, I never enjoyed it. I would find an opportunity here and there to leave it. And then, when I finally decided to perform, I had no one to mentor me on eye movement, or aesthetics, or presenting oneself in front of the audience, or choreography. I never reached that stage where a guru or a mentor had enough confidence in me that could help me with the delivering part,” she narrates. 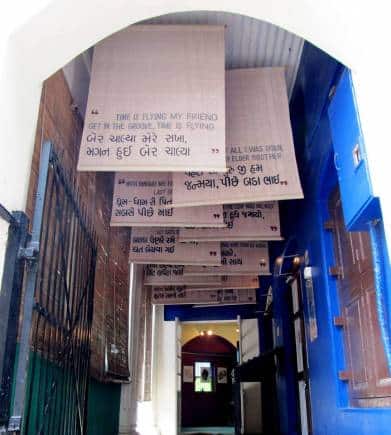 “The Museum largely deals with the idea of ‘identity’. It acts as a home to diverse critical explorations on conflict transformation and art practice,” explains Avni Sethi

But dancing brought new experiences, new encounters to her, such as meeting a Sufi musician on a dancing tour across eight cities in Gujarat. “I was 22 that time and he was 10 years older. We were a part of the same karawan. I was dancing to Kabir, he was singing a lot of Amir Khusrau and Bulleh Shah. Coincidentally, we had a lot in common to talk over chai. By the time we completed that tour, I had committed to marry him and we got engaged. He was my first encounter with Sufi writing and Sufi thought. Even though the relationship fell apart over time but through his presence, and the influence he brought in, a lot changed in my life. Suddenly, worlds opened up,” reminisces Avni, emphasising that while everything around us tells us that we are completely in control of our lives, it is not true.

More of an observer than a participant now, Avni feels that it’s a trait she has acquired over the years thanks to her parents. Her father is a human-rights activist and her mother teaches management and has worked largely around gender. As a child, Avni heard stories of protest and resistance, and that resulted in a paradigm shift in her perspectives.

“After hearing those stories and meeting people who were fighting every day, I realised my conflict was much smaller compared to theirs. And then, when I was much older, I went to Kashmir to study the kind of surveillance practices the Indian State uses to control Kashmiri bodies for my dissertation. That’s when I saw life from an aerial view for the first time,” says Avni, who studied design from the Srishti School of Art, Design and Technology, Bangalore, and pursued Master’s in performance studies at the Ambedkar University, Delhi.

As an artist, her performances are inspired by syncretic faith traditions as well as sites of contested narratives. The Conflictorium Museum was initially her diploma project at design school.

“The Museum largely deals with the idea of ‘identity’. It acts as a home to diverse critical explorations on conflict transformation and art practice,” explains Avni, who is the recipient of the 2020–2022 Jane Lombard Prize for Art and Social Justice from the Vera List Center for Art and Politics at New York’s New School.

“Democracy is learnt behaviour. But, these days, we have everything eroding more of it; we are unlearning democracy every day,” she says. Through her work, she is trying to create a space for learning and relearning this most precious of human achievements.