Reported cases of cyber-crime against women in India rose by 39 percent in 2019, and against children by 31 percent. Kerala reported a 13 percent decline and 20 percent rise, respectively, over the previous year.

Reported cases of cyber crime against women and children as well as registered cases of fake news on social media have risen over the last three years, according to National Crime Records Bureau (NCRB) — Crime in India 2019 data.

In the recent context of the widely debated law passed (and now withheld) by the Kerala government to curb offensive messages/content, we decided to look at certain crimes reported under the NCRB.

On November 21, the Kerala governor had promulgated an ordinance mandating jail term up to three years and/or a fine up to Rs 10,000 for expressing, publishing or disseminating any abusive, humiliating or defamatory message against a person or a “class of persons.”

The law — Section 118A — states: “Whoever makes, expresses, publishes or disseminates through any kind of mode of communication, any matter or subject for threatening, abusing, humiliating or defaming a person or class of persons, knowing it to be false and that causes injury to the mind, reputation or property of such person or class of persons or any other person in whom they have interest shall on conviction, be punished with imprisonment for a term which may extend to three years or with fine which may extend to ten thousand rupees or with both.”

The Kerala government now plans to roll back its decision of implementing the controversial amendment to the Kerala Police Act following widespread opposition and criticism from across the political sphere. Critics have called the government out saying that the law would infringe upon the rights to “free speech/expression and media freedom.”

The Kerala government had claimed that the amendment was to help prevent cyber attacks against women and children. “The rise of crime through social media is a matter of great concern. Some of the recent crimes committed using cyber platforms have caused great concern among our female community. Cyber attacks are also a major threat to private life. It has been decided to amend the Police Act as it is found that the existing legal provisions are inadequate to prevent such crimes,” the government’s press release earlier in October stated. 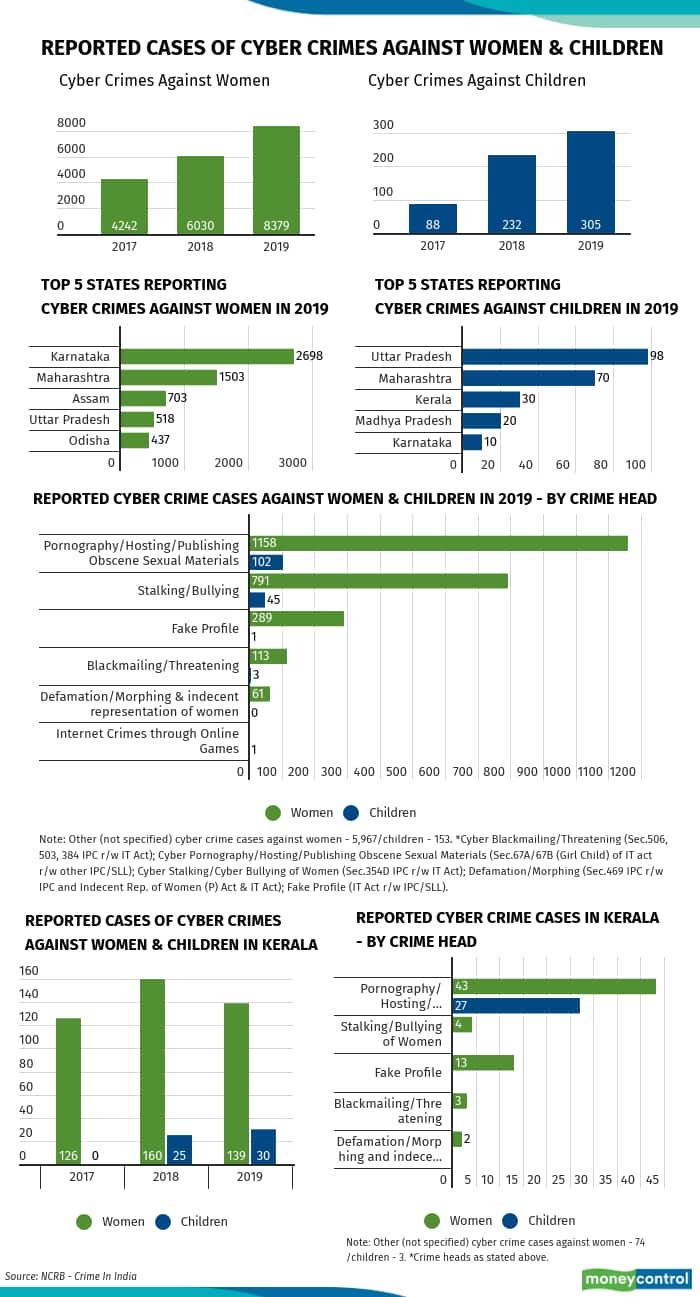 Likewise, cases reported under this crime head topped at the national level as well, followed by online stalking/bullying of women/children.

The NCRB started publishing data for cyber crimes against women and children in detail from 2017. Likewise, it has also been reporting data on circulation of false/fake news (including on social media) since then.

The menace of false/fake news and rumours continues

The NCRB recorded 476 reported cases of circulation of false/fake news/rumours under section 505 of the Indian Penal Code in 2019 across India, a 70 percent increase  in registered cases from the previous year.

Likewise, with regard to cyber crimes, the NCRB categorises ‘fake news on social media’ as an offence under the IT Act — “involving communication devices as medium/target”, together with section 505 of the IPC. Under this, 190 cases were reported across States in 2019, up from 97 cases reported the previous year. 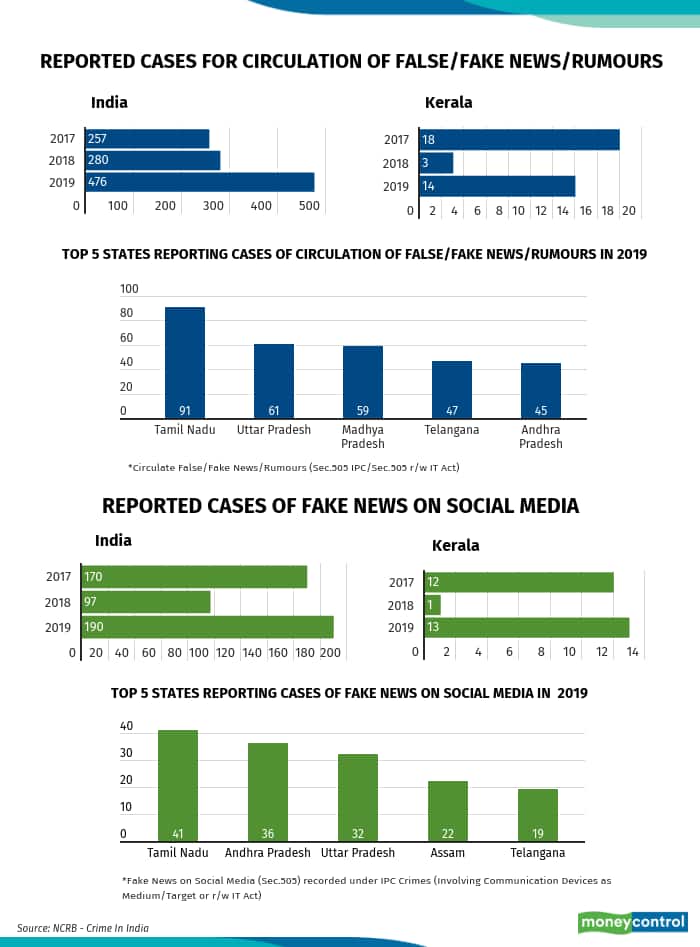 Kerala reported 13 such cases of fake news on social media in 2019, while Tamil Nadu reported the most (41), followed by Andhra Pradesh (36).

It is essential to note that though data indicate a rise in reported cases, it may not necessarily mean an increase in crime, but could also be due to better reporting as a result of facilities —  like e-FIRs, women help desks and certain policy initiatives, the NCRB cautions.

With regard to the law passed by the Kerala government, though it claimed to address the “problem of cyber bullying and hate speech over social and digital spaces”, the law is not restricted to cyberspace as it does not specifically mention “social or digital media”, keeping its jurisdiction open ended, by targeting “any kind of mode of communication”. This has made it ambiguous.
Chaitanya Mallapur
Tags: #Cyber Crime #fake news #India #Kerala
first published: Nov 25, 2020 02:51 pm