NCB arrested comedian Bharti Singh and her husband Harsh Limbachiyaa for possession of 86.5 grams of marijuana to which they admitted.

As soon as the news of Bharti Singh and her husband Harsh Limbachiyaa were arrested, Singh’s old tweet asking people to give up drugs have started going viral on Twitter.

In a July 2015 tweet, Bharti Singh had tweeted, “People stop taking drugs it is harmful to your health #saynotodrugs.” 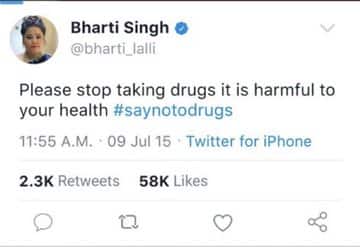 After her tweet people started criticising the comedian on Twitter for not being able to stick to her word although the matter is still under NCB’s investigation.

5 years ago #BhartiSingh used to give gyaan on drugs pic.twitter.com/OpoiNgzQMJ

The Mask of being too good for the world they used to wear on their faces have fallen down in front of Everyone! #BhartiSingh #HarshLimbachiya pic.twitter.com/zsideCCe5b

The Narcotics Control Bureau (NCB) arrested Bharti and her husband Harsh Limbachiyaa for possession of 86.5 grams of marijuana on Saturday after a search at their house in Mumbai.

The couple reached the NCB office and admitted to consuming marijuana after which they were arrested.

The raids are part of a series of investigations that the anti-drugs government agency has taken up to find out the extent of drug abuse in the film industry.

The investigations have been going on for the past 3 months or so – after the controversial death of Sushant Singh Rajput in June and allegations that the drug mafia was involved in his now declared death by suicide.

Bharti Singh is one of the stars who has featured on popular shows with Kapil Sharma apart from a bunch of other comedy-based shows aside from hosting several other reality TV shows in her career.
Moneycontrol News
TAGS: #India
first published: Nov 22, 2020 11:24 am