Published by Hodder and Stoughton, this book unpacks how WeWork founder Adam Neumann attracted investments worth billions of dollars with his charismatic appeal, soaring ambition, and ruthless networking.

Reeves Wiedeman’s book Billion Dollar Loser (2020) is about the astonishing rise and unceremonious fall of a real estate company claiming to elevate “the world’s consciousness.” His protagonist is a man named Adam Neumann, an Israeli immigrant to the United States, who built WeWork with the idea of “repurposing surplus office for the burgeoning freelance class.” Published by Hodder and Stoughton, this book unpacks how he attracted investments worth billions of dollars with his charismatic appeal, soaring ambition, and ruthless networking.

The author is a contributing editor at New York magazine, and this book grew out of his work on an article titled “The I in We:  How did WeWork’s Adam Neumann turn office space with ‘community’ into a $47 billion company? Not by sharing,” which was published in 2019. His acute attention to detail clearly suggests a large number of sources, and the persistence to dig as much as possible. When a ship is sinking, people love to talk. It seems that Wiedeman happened to be at the right place at the right time, and the material kept coming his way.

The book reveals that, in January 2016, when WeWork was six years old, Neumann flew to India to meet Prime Minister Narendra Modi at a technology conference hosted by the politician. Apparently, Neumann also baked a loaf of Challah bread -- eaten by Jewish people on special occasions -- for Modi in a house owned by Jitu Virwani, Chairman and Managing Director of Embassy Group. Unfortunately, this bread did not reach the intended recipient. If Wiedeman’s story is to be trusted, Modi’s security team rejected the gift, saying that it could be poisoned.

Wiedeman writes, “This account is based on more than 200 interviews with many of WeWork’s most senior executives; employees at all levels and in every department; the landlords and investors who bolstered the company’s rise; the bankers, lawyers, and advisers who worked on its failed IPO; and Adam Neumann’s friends, critics, admirers, and rivals.” He also draws on “interviews given to other journalists...various documents, legal complaints, internal emails and recordings, contemporaneous news reports, and other materials in recreating events.” 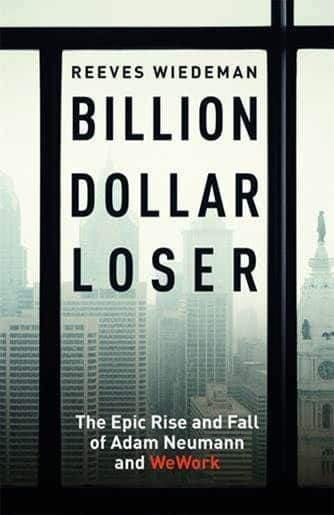 In order to grasp the scale of WeWork’s operations, it is useful to know that it runs co-working spaces in almost every major city in the world. That, however, is not its claim to fame. Its success and notoriety rest on Neumann’s branding. He was able to convince influential people with deep pockets -- most notably, Masayoshi Son, the founder of SoftBank, a Japanese technology conglomerate -- that his offering was fundamentally different from his competitors because he wanted to foster community, reshape society and change the world.

Billion Dollar Loser is not for readers who are dazzled by Neumann’s entrepreneurial skills or spiritual convictions. It is quite clear that Wiedeman views him as a charlatan who can cast a spell over unsuspecting believers with his penchant for hyperbole. The book is an exposé, so the author is unsparing in his critique of Neumann’s cult status as well as his politics. The tone he adopts while writing about Neumann is often snarky, and the anecdotes he supplies to back up his impressions are so outlandish that they make one squirm with embarrassment.

It is quite clear that Wiedeman views him as a charlatan who can cast a spell over unsuspecting believers with his penchant for hyperbole.

Once, during a meeting with two employees from his public affairs team, Neumann apparently mentioned that the company was likely to be more impactful on a range of issues than any government would. If Wiedeman is to be believed, Neumann said, “Maybe I can be president of the United States one day.” One of those employees had the unpleasant task of reminding him that, of the three people in that room, only two could legally become president since Neumann was not born in the US. “President of the world, then!” Neumann is reported to have said.

Neumann’s wife, Rebekah, also credited as a co-founder of WeWork, appears in a less than flattering light in the book. She is supposed to have played a major role in getting the company to adopt a lofty vocabulary inspired by the teachings of the Kabbalah Centre, an organisation that the couple was connected not only for spiritual reasons but also because it gave them access to some of the wealthiest people in New York. Apart from all the vague talk about ‘energy’, employees were miffed to discover that the company stopped serving meat at events.

Wiedeman does acquaint readers with the life story of Miguel McKelvey, the other co-founder of WeWork, but his focus remains on Neumann whose “public reputation had been torn so rabidly apart that there seemed to be no chance of redeeming it in the near term.” Why did this happen? “Neumann’s company spent so much money expanding around the world in 2018 that it lost nearly $2 billion, and even his employees didn’t know exactly what it meant to say that they were now trying to elevate the world’s consciousness,” writes Wiedeman.

Billion Dollar Loser does not evoke any sympathy for either Neumann or his co-founders because they were unwilling to address the concerns of underpaid and overworked employees, many of whom gave up precious family time and more lucrative jobs to help nurture WeWork’s mission that turned out to be a sham. The author also castigates investors who did not hold Neumann accountable when they needed to, despite the dangers that lay ahead. This book is best summed up as a cautionary tale about how absolute power corrupts absolutely.
Chintan Girish Modi is a writer, educator and researcher who tweets @chintan_connect)
Tags: #Adam Neumann #Book Review #WeWork debacle
first published: Dec 12, 2020 08:04 am