Upcoming Webinar:Innovate Your Future at India Inc. on the Move on August 26 and 27, 2021 at 10am, with Rockwell Automation
you are here: HomeNewsTrendsBook Review

In If Then: How One Data Company Invented the Future, Lepore takes a close look at Simulmatics Corporation and reveals how data mining, and influencing human behaviour predates Facebook, Google and Amazon.

Jill Lepore’s book If Then: How One Data Company Invented the Future (2020) sheds light on a momentous piece of technological history that will interest worshippers of big data as well as critics of psychological warfare. It is a study of the Simulmatics Corporation that took credit for getting John F Kennedy elected president of the United States in 1960. Read it to find out whether this is a bogus claim, a half-truth or an indisputable fact.

Who were the ambitious young men investing their time and energy in this work? What gave them the idea that machines could “serve as their oracles, new seers, electronic prophets and diviners of data”? Where did the funding for their projects come from? How did they bag government contracts? Lepore approaches these questions with a passion that is reflected in the thick descriptions that make up every page of the book.

The author’s objective is to recover the forgotten history behind the advent of data mining and targetted messaging. She is a historian, journalist and podcaster who describes Simulmatics, founded in 1959, as “Cold War America’s Cambridge Analytica.” Through extensive research on “the People Machine”, she shows that the means to “predict and influence human behaviour” predate today’s Facebook, Google and Amazon.

Published by John Murray, this riveting work of non-fiction is divided into three parts spread over 14 chapters. It also contains a prologue and an epilogue. The information has been collected from interviews, archival research, and consultations with numerous scholars including “not only historians and other humanists” but also scientists working with data who “tolerated” Lepore’s “scepticism about behavioural science”.

It is clear from this book that Simulmatics was no small operation even if it has disappeared from public memory. Lepore records that the company had offices in New York, Washington, Cambridge, and even Saigon. Its fame and notoriety rested on a computer programme that hoped to forecast as well as influence “all sorts of human behaviour, from buying a dishwasher to countering an insurgency to casting a vote”. 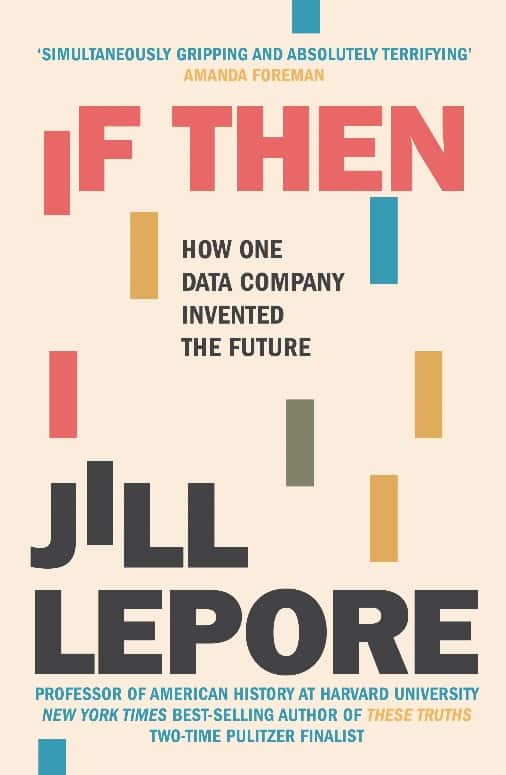 The scientists at Simulmatics used a language called FORTRAN. It employed If/then statements “to instruct a computer to simulate possible actions and calculate their consequences, under different conditions, again and again and again.” Their technology was used to predict race riots in the United States, to win “hearts and minds” during the American War in Vietnam and to win African American votes by pushing for civil rights.

Lepore combs through this history keeping the stories of the founders at the centre. Readers get to know Edward L Greenfield and Ithiel de Sola Pool rather intimately, and “the best and the brightest, fatally brilliant, Icaruses with wings of feathers and wax, flying to the sun” that they had assembled from the Massachusetts Institute of Technology and premier universities such as Yale, Harvard, Columbia and Johns Hopkins.

The author branches off into directions that might be perceived as irrelevant and distracting by readers who prefer a more cut and dried narrative. There is, for instance, a brief but rich discussion on how these men treated their wives. Such detours help construct a more comprehensive portrait of the work culture that these pioneering tech bros had created as they tried “to automate the simulation of human behaviour”.

How did these men— labelled by Lepore as “the long-dead white-whiskered grandfathers” of Mark Zuckerberg, Sergey Brin, Jeff Bezos, Peter Thiel, Marc Andreessen and Elon Mark —gain credibility? What made them get involved with a project “to inoculate Venezuela from the influence of Communist revolutionaries”? Why were they compelled to declare bankruptcy in 1970? Lepore offers answers and food for thought.

This book would be of much value to readers who have enjoyed Christopher Wylie’s book Mindf*ck: Cambridge Analytica and the Plot to Break America (2019) and Nina Schick’s book Deep Fakes and the Infocalypse: What You Urgently Need to Know (2020) in the past. It does not shy away from talking about the politics of technological choices, and actively concerns itself with the ethics of the work that Simulmatics was earning from. Lepore, however, is not inclined to think of them as “villains”.

She writes, “They were midcentury white liberals in an era when white liberals were not expected to understand people who weren’t white or liberal. They were husbands and fathers in an age when men were not expected to understand women and children.” Apparently, to them, human behaviour meant “the behaviour of men”, while artificial intelligence meant “their own intelligence...which they intended to graft onto a machine.”

While Lepore’s point is well-taken, it can be difficult for readers to see these people only as products of their times. Their decisions had far-reaching consequences. Simulmatics ceased to exist but “the fantasy of predicting human behaviour by way of machines” is thriving. Though Lepore makes no such demand, her book can prod us to think more carefully about the gendered nature of predictive technologies and the tech industry at large.